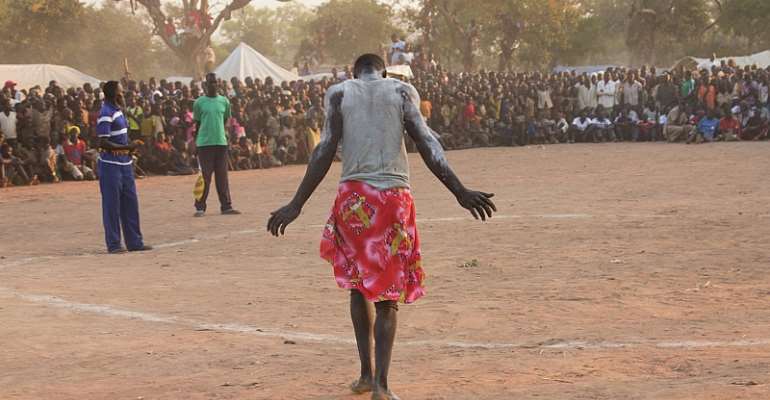 Beats of the Antonov was a big winner at the 36th Durban International Film Festival, taking home both Best Documentary and the freedom of expression award.

The uplifting documentary is a celebration of the people of the Blue Nile and Nuba Mountains in Sudan, who fought with the South for independence but now remain trapped in a civil war in the North.

The jury awarded Beats of the Antonov R25 000 for Best Documentary “for its story, characters, relevance and visual interpretation,” and for a “story told with grace, while honouring the integrity of the people who gave them access as well as the subject matter.”

The jury for Arterial Network’s Artwatch Africa Award for freedom of expression, which carries a cash prize of R15 000, added, “This compelling film shows how the power of music, dancing and culture sustains the displaced people living in the remote war-ravaged areas of Southern Sudan.”

City Press similarly hailed Beats of the Antonov as “the must-see film at the Durban International Film Festival this year.” Scoring the documentary 9/10, reviewer Charl Blignaut said the "truly extraordinary film dances a line between cultural expression and an exploration of identity in a pure, textured and impossibly complex Fanonian sense… Beats of the Antonov is the purest kind of cinema. One man and a camera that unpeels a story of the unmakings and makings of identity through cultural production, one where the musician and the audience is unseparated, where music is able to express both lament and healing.”

The documentary also re-opened debate over the South African government’s decision to allow Sudan’s current president, Omar al-Bashir, to leave South Africa last month, flouting a court order and international convention. As Tymon Smith wrote in his festival review in The Times, the “excellent Beats of the Antonov… got tongues wagging.” As the headline of a Sunday Tribune op-ed said, “Zuma needs to see his Sudan documentary,” which positions the civil war in Sudan as a racist war driven by an anti-black notion of Arabisation.

"Omar al-Bashir, who is by all counts a black African, chooses to identify mainly as Arabic-Islamic,” hajooj told The Financial Mail. "This is not an issue until he, and previous Sudanese governments, impose this, at gunpoint, as a national identity on the rest of the 56 major ethnic groups that make up Sudan. This one-dimensional Sudanese identity creates marginalised second-and third-class citizens and an endless state of war in Sudan."

Watch and embed the trailer: https://www.youtube.com/watch?v=fi3ronTd3xg .

What people are saying: "I was quite wrong about where Beats of the Antonov would take me… Despite its vicious political plot, Beats of the Antonov is a story of triumph. The very thing that the dominant regime wishes to stamp out – black African identity – is what saves these people from complete desolation. By gathering to make music in local languages, and pass on these cultural practices to a new generation, they sing their identity into being: a defeat of the Bashir project.” Binwe Adebayo, CityPress

"Every now and then, it seems as if there is nothing new out there. Everything seems derivative, repetitive or just plain bland. As a filmmaker, I sometimes go through moments of extreme lack of inspiration; and even question my choice of career. And then an unexpected spark happens to light the way. Beats of the Antonov… is such a spark… Kuka paints a beautiful picture of music, war and identity in the Blue Nile and Nuba regions, and the film is unlike anything I have ever seen… Beats of the Antonov and its infectious music stayed with me for days after viewing it… With more films like this coming from African directors, we could be witnessing the start of a new canon of African film.” Dylan Valley, Africa Is A Country

‘’Beats of the Antonov is a true standout…’’ Variety

“Uniquely captivating… finds a new, genuinely interesting perspective from which to explore a complex situation… Deeply personal but also deeply enlightening record of a situation that so many of think we know but don’t truly understand.” Shadow & Act on Indiewire

“Equal parts war-documentary and visual ethnomusicology project… a nuanced portrayal of cultural identity, the trauma of civil war, and what it means to be Sudanese today.” OkayAfrica

“A vivid picture of culture and identity in times of war… While the war dictates the rhythm of their lives, the resilience of the community – and their music making – shines through.” The Daily Vox