Who And Who Killed President Mills?? 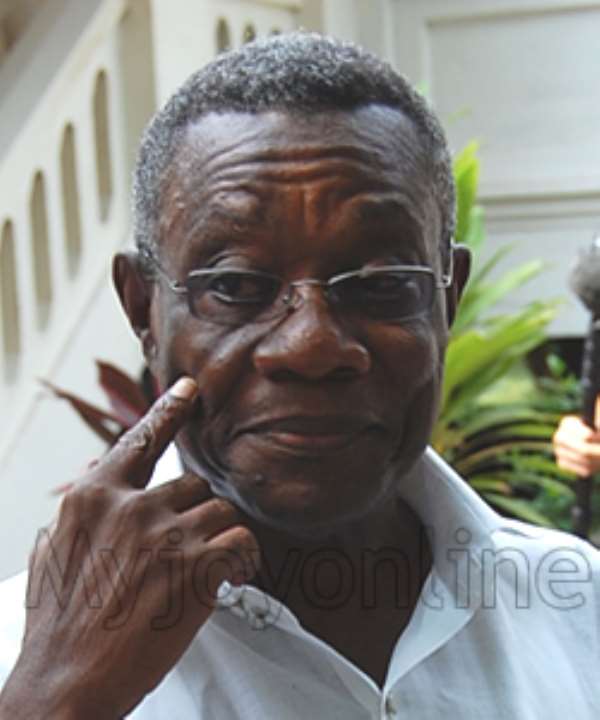 24th July, 2015 will be three years since Professor John Evans Atta Mills was officially pronounced dead. This article which was published almost three weeks before his official date of death will alert the nation as to the role some highly place members of government played in dispatching him to his untimely death. If only they had listened to my lone voice crying in the wilderness, but alas ……..

The President Is Sick. Take It Or Leave It

Posted by Business in Ghana on July 3, 2012
By Daniel Danquah Damptey,
Sickness is not something we wish for ourselves, not even for our worst enemies. As long as we remain mortal, sickness and diseases will remain part and parcel of our life. I see nothing wrong with someone falling ill. An Akan axiom says that “Se woton wo yarea a na wonya ano aduro”. Translated literally, it means if you tell people your ailments, you get medicine for it.

The prevalent disease in both my maternal and paternal families is diabetes. Almost every sibling of my mother suffered or is suffering from that disease. Two out of my seven surviving siblings are known carriers of that disease. I went for the test and it came out negative. But that was a little over a year ago.

The diabetic trait in the family has made us all conscious of how we lead our lives. We have also become each other’s keeper. Personally, I like sweet things and my family is always on me to cut down on the quantity of sweet intake in my diet. But this is something which affects the Damptey family and the ordinary people of Abomoso. I cannot say so about other families.

Thus, I find it difficult to comprehend all the secrecy surrounding the health of our President. His health status has become a “No go area” during public discourse, for the moment you broach on the subject the NDC will unleash its attacking dogs, vampires, vultures, sharks, snakes, wolves, foxes and eagles on you as if you were a notorious criminal who should be destroyed at all cost.

President George H.R. Bush Vomiting Incident: The President fainted after vomiting at a banquet hosted by the then Japanese Prime Minister, Kiichi Miyazawa and attended by 135 diplomats. The date was 8th January, 1992 at 8.20pm. The incident was widely reported and quickly became a fodder for the nation’s comedians. It caused a wave of late night TV jokes and ridicule in the international community, with the coining of “Bush-suru” which literally meant “to do the Bush thing”. Can you laugh over such an incident involving the President, if it had happened in Ghana? Definitely, not! The Security officials will skin you alive!!

The Dick Cheney Shooting incidence: He was the Vice President during the George Bush administration. On February 11, 2006, he shot Harry Whittington, a 78 year old Texas Attorney while participating in a quail hunt on a ranch in Kennedy County, Texas. The first public news was called in to the “Corpus Christi Caller Times” on February 12, 2006 by ranch owner, Katherine Armstrong. The Bush Administration disclosed the shooting incident to the public in the afternoon of February 12, 2006. Local authorities released a report on the shooting on February 16, 2006 and written statements on February 22. Cheney spoke publicly about the incident on February 15, 2006.

Could such a thing have happened in Ghana? Definitely not! Any person or newspaper reporter who commented or wrote about the incident would have been hounded and hunted by the BNI. Who born dog?

When Kweku Baako’s intelligence unit intercepted a police extract in which the “wayoman” had made some incriminating statements against top members of the government, the NDC Police CID went after the ace journalist, not the criminals.

President Woodrow Wilson suffers a stroke in 1919: He had sold the concept of the League of Nations to European Powers. But the US Senate blocked the idea. His attempt to speak directly to the American people ended in a fiasco.

President Andrew Jackson was in pain emotionally and physically. He had lost his wife and was also suffering from rotten toothache, chronic headaches, failing eyesight, constant pain and internal bleeding from two bullets lodged in his body.

President William Harrison: He faced election rumours that he was unwell. To discredit those rumours, he waged a very active campaign that left him exhausted. The Inauguration Day was bitterly cold but the new President wore neither overcoat nor a hat. His inaugural address lasted almost two hours. He developed a severe chest cold, from which he never fully recovered.

President John Evans Fiifi Atta Mills: Truth, though is bitter, it must be told. It is an acknowledged fact that the President has a problem with his sight. Earlier on in his presidency, he had a problem reading from his prepared written addresses. The font sizes of the letters were increased almost five hundred times. The pronunciation of “ecomimi” and “ofumfuo” instead of “economy” and “Otumfuo” stems from the fact that he had problems with his eyesight.

And will this perhaps explain the death of the Ghana High Commissioner to Canada who died three days after playing host to the President and shaking his hands? Will it perhaps explain the strange happenings in the country …suicides, murder, ethnic clashes, accidents both on land and on air? Could it perhaps explain why the NPP activist refused to take the outstretched hand of Baba Jamal at Akwatia? Will it also explain why Betty Mould changed everything at the office of the Minister of Education when she was made the substantive Minister? By the way, where are those items that were carted away from the office?

Routine Medical Checkup: The President told us he was going for a routine medical checkup. Something that is routine but it took nearly two weeks! Okudzeto Ablakwa also told us he was going for a second opinion. Which was which? This same Okudzeto Ablakwa, the Chemical Ali of Ghanaian politics had some time ago told us that the President’ palm had turned dark due to the effect of the drugs used to treat the President’s throat cancer. Has the cancer been cured? Did the routine checkup have anything to do with Cancer?

Now listen to the President and tell me if you could make head or tail out of it. “Let me tell you in six months, we are going to work very very very very very hard. I remember the last time when I came back from the G8. He (VP John Mahama) had been in Sunyani and when I spoke with him, he wasn’t well at all and when I came back from the G8 and as far as I am concerned, this is nothing I will say calls for something by all Ghanaians. I am only going there to make sure that yes, we look at this that … and come back to continue …” Does this speech make any sense to you? And you tell me the President is well!

And for the First time in his presidency, the President publicly announced that in his absence, the country would be administered by the Vice President. What do you think was going on in the mind of the President at that time?

As I have stated somewhere before that the New Patriotic Party, (Nipa Pa Party) does not wish the death of President Mills. We wish him well. We want him to be alive to witness God’s prophecy about setting a table in the presence of our enemies come true. Yes, the NPP will surely run roughshod over the NDC. We will demolish them. Yes, Nana Addo Dankwa Akufo Addo will “maul” John Evans Fiifi Atta Mills on 7th December, 2012. We want the President to be alive so that he will see how God will use Nana Addo to move Ghana to greater heights.

Those who do not wish the President well are the very people surrounding and holding him hostage. What was the essence of the physical torture they put the President through by making him jog and trot before his departure and after his arrival at the airport? It wasn’t a wise thing to do. If they believe they are deceiving Ghanaians by giving the president increasing dosage of “steroids” to enable him undergo some physical actions which ordinarily he wouldn’t be able to do, then they have something worse coming. They are putting the health of the president in jeopardy.

The President is not well and should call it quit. But for nefarious reasons, those with skeletons in their cupboards and would who might be negatively impacted when there is a change of guards are forcing the man to go beyond his endurance. And it is such people that I am making this passionate appeal to. Please, the life of our President is valuable to us. Do not, in the name of God Almighty and for your own selfish interest do the unthinkable by flogging a willing horse to its death.

And if the President loves this nation, he should not allow his “aides” to lead him astray. Mr President, you must be conscious of your health. Call it quits when the ovation is loudest. You will regain the love and forgiveness of Ghanaians. Do not act like the Mohammed Allis and the D.K.Poisons of yesterdays.

You may not like me. You may call me all sort of names. You may even crucify me. But I remain unruffled in my quest to ensure that the right things are done. I am only performing my patriotic duty by alerting Ghanaians to the fact that our President, Professor John Evans Fiifi Atta Mills is seriously ill and must step aside.