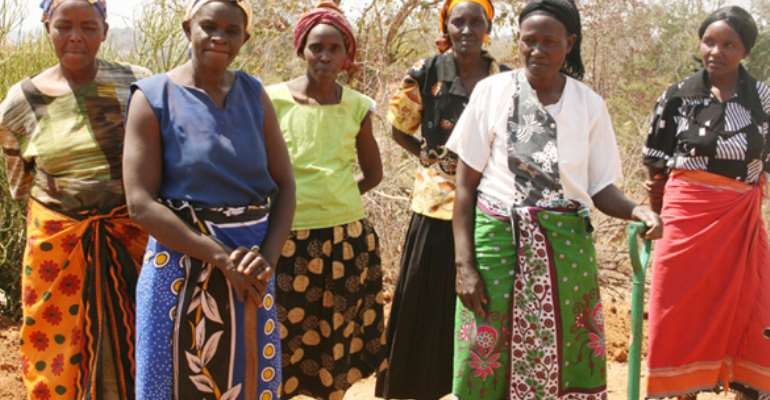 Saving our planet, lifting people out of poverty, advancing economic growth... these are one and the same fight. We must connect the dots between climate change, water scarcity, energy shortages, global health, food security and women's empowerment. Solutions to one problem must be solutions for all by Ban Ki-moon

Kubura is an energetic young woman farmer from Binduri in the Upper East Region of Ghana who spends hours each day hauling water for her family to drink, wash, as well as for their livestock and crops and cooks for her families as well. She is a mother of six children and also the bread winner of her family. Kubura being a widow, always spends all her days and nights in the farm for the betterment of her six children. She always wakes up very early to go to the farm as is their source of livelihood.

There was heavy rain in that community and Kubura thought it was a sign of a plentiful harvest and that their farms will be filled with happiness. But this hope soon faded because a sudden drought came and the sun beat down, withering up the crops. It lasted for two weeks scorching the earth and leaving many trees naked. The water dried up in the streams. Kubura dug holes in her stream and a little water bubbled out but only for a few days. She had to carry water again to her farm. Watching the yam tendrils withering and the young roots rotting in the mounds was very painful for her. She asked herself “how am I going to fend for myself and six children”? They moaned.

Women in Ghana are among the poor and the most vulnerable to the impacts of climate change such as drought, floods, extreme weather events and reduced food and water security which affect them and men differently with the poorest being the most vulnerable and are predominantly responsible for food production, household water supply and energy for heating and cooking. When crops fail due to flooding, drought or soil erosion, less food is available and women find themselves under stress to provide food for their families. As food, fuel and water becomes scarce; women have to walk farther to collect them and long treks often put them at a greater risk of violence. When extreme weather conditions do hit, women suffer the most and is often linked to their lack of rights as many can't leave their homes during emergencies if they lack a male escort.

In continents like Africa, where women are responsible for 60-80% of food production, unpredictable growing seasons and increased incidence of droughts and floods place women, their families and their livelihoods at risk. About two thirds of the female labor force in developing countries and more than 90% in many African countries are engaged in agricultural work.

In Ghana, women tend to have lower incomes and are more likely to be economically dependent than men. When drought or unseasonable rain, for example, threatens agricultural production in Ghana, men use their savings and economic independence to invest in alternative income sources or otherwise adapt. In times of food scarcity and drought, women will often give priority to their husbands—his nutritional needs will be met before hers.

In times of drought and erratic rainfall in Ghana, women walk farther and spend more of their time collecting water and fuel. Girls may have to drop out of school to help their mothers with these tasks, continuing the cycle of poverty and inequity. Changing climates also affect the health of crops and livestock, and women, who are often responsible for producing the food eaten at home, must work harder for less food.

Women make up the majority of the worlds poor and are more dependent than men on natural resources for their livelihoods and survival. Women are also more vulnerable because they have less access to education and information that would allow them to manage climate-related risks to agriculture and livestock. The indirect effects of climate warming and increased humidity have greater consequences for women. An increase in rising temperatures will mean an increase in the transmission of malaria and various physiological changes, such as increased exhaled breath and heat dissipation, make pregnant women more appealing to malaria-carrying mosquitoes, leaving them particularly vulnerable to malaria in the country.

Studies have shown that women disproportionately suffer the impacts of disasters, severe weather events, and climate change because of cultural norms and the inequitable distribution of roles, resources, and power, especially in developing countries. Awareness of the differential impacts of climate change on men and women is increasing. However, women have knowledge and coping strategies that give them a practical understanding of innovation and skills to adapt to changing environmental realities as well as to contribute to the solution. These strategies to deal with climate variability are still a largely untapped resource.

Additionally, women are often faced with difficulties when it comes to the general accessibility of financial resources, capacity-building activities and technologies. This often stands in the way of women’s empowerment in general and their role in relation to climate change adaptation and mitigation in particular. Women also tend to be underrepresented in the decision-making on climate change at all levels. This severely limits their ability to contribute and implement solutions and apply their expertise.

Research also shows that women may be more likely to change strategies in response to new information and to make decisions that minimize risk. All these qualities suggest that when women are empowered, they can be extremely effective agents of adaptation to climate change. Even though, women are therefore disproportionately affected, at the same time they play a crucial role in climate change adaptation and mitigation actions.

It is increasingly evident that involving women and men in all decision-making processes on climate action is a significant factor in meeting the climate challenge and achieving the long-term objectives of the Convention. Women can make a strong body of knowledge and expertise that can be used in climate change mitigation, disaster reduction and adaptation strategies in Ghana.

Conducting a study on gender-differentiated impacts of climate change in Ghana is strongly recommended to obtain gender risk or vulnerability assessment in communities that are more prone to climate change effects to form a basis for relevant interventions or scale-up across the country. Having a gender sensitive climate change policy is highly commendable in Ghana and other African countries.