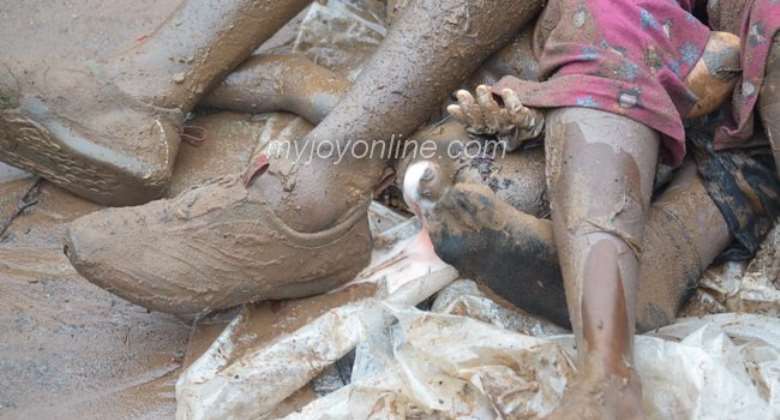 Former President Rawlings made the above statement on 4th June, 2015 after seeing the havoc of the rains and the fires that have resulted in the death of over a hundred people in the city of Accra. The images of charred bodies are terrifying. The 37 Military Hospital has exhausted its capacity to take in more bodies. The Korle-Bu Mortuary is reportedly full after having received scores of dead bodies arising from the rains and the fires at the Gas Filling Station close to the GCB towers near Kwame Nkrumah Circle. Media reports indicate that more bodies are being recovered from the debris. And so the former president rightly made this statement in an apparent anger at the array of unauthorized structures built on water ways and wished he had a bulldozer to pull them down! Should I doff my hat for him? I shall return to this subject later on in this piece.

Post June 4th Uprising and the Surge of Indiscipline

There is every justifiable reason to link the disturbing imagery of the disaster to the jaundiced leadership that Ghana has witnessed post-Independence and more importantly, post June 4, 1979 uprising which was historic yet horrific episode in the annals of Ghana’s political history. The June 4th Uprising came as a cleansing soda of the state from failed leadership that had characterized the reigns of governance in the dying embers of the 1970s. On the 15th of May, 1979, the head of the Supreme Military Council (SMC II) General F.K. Akuffo put Flight Lieutenant J.J. Rawlings on public trial for having attempted to overthrow his government. Rawlings showed leadership at the time and requested that his fellow accused junior officers be set free as he took sole responsibility for the attempted mutiny. Eventually he was incarcerated.

Rawlings gained his freedom from the walls of prison when Major Boakye Djan and the other junior military officers broke into his jail in the night of 3rd June, 1979 and set him free. Ghanaians supported him and called him “Junior Jesus”. Eventually, the military leaders of the SMC II namely Generals Fred Akuffo, Ignatious Kutu Acheampong and Brigadier Akwasi Amankwaa Afrifa as well as five other Generals - Utuka, Felli, Boakye, Kotei and Amedume - were rounded up, sheepishly trialled and executed by firing squad in June, 1979. Yes, they were killed for corruption and bad governance. They were killed because they failed to provide for the needs of the ordinary Ghanaians. They were killed because indiscipline had become the norm hence the need to restore probity and accountability in the body politic of our governance system. I recount this sordid event because today is the 36th Anniversary of the June 4th Uprising and yet the cause of the uprising has been defeated as indiscipline, corruption and nepotism surge in governance and the larger society.

The Agonies of Histories
The sheer co-incidence of today being the 36th Anniversary of the June 4th Uprising and the death of several hundreds of people recorded in Accra’s flooding shows that we have blatantly refused to learn from any events of history. As I monitored social media and radio reports on the rains and its havoc, I came across two newspaper cuttings on the Facebook wall of Lawyer Robert Nii Addy Clegg culled from the Daily Graphic both of which told the stories of massive floods in the city of Accra as occurred on 4th July, 1968 and June 9th, 1988. The latter story headlined ‘Accra records heaviest rains in 9 years’, the reporters Kwaku Nkrumah and Dan Tetteh indicated that the rainfall measured five inches and that was less than the 7.56 inches recorded in June, 1959. The second newspaper cutting headlined ‘Torrential rains cause floods in Accra City’ put the recorded rainfall at 87.09mm. These stories prompted further search for information on Accra’s floods and the evidences are overwhelming. The conclusion is that the rains have become annual rituals. No leadership regime has been spared the impact of the rains.

However, the horrendous havoc of the rains continues to show how punctured our garments of leadership have become. We have failed to learn from the happenings of the past. Nature blesses us with rains and it becomes a disaster because we the people are notoriously irresponsible. Whereas the generality of Ghanaians are not disciplined, I put the blame on the nation’s leadership. My singular reason is that in any society where laws and systems are dysfunctional, human beings behave like animals. That is why we generate garbage and dump same into the poor drainage systems we have in the city. We do so because we have developed the dead goat syndrome and we certainly have selective myopia so we simply forget that the rains will come and we will suffer the impact of our irresponsible conducts. We do so because our laws cannot bite!

How Successive Presidents make a Mockery of Leadership

There is an annual mockery of leadership when our Presidents tickle themselves and run down their own leadership powers. During Rawlings’ 19 years in office, Accra recorded floods several times. In the same way, floods did occur repeatedly in the years of former President Kufour, the late President Mills and today, it continues to occur under President Mahama. History shows that the rains will come and the floods with its havoc will occur unless we act proactively. Even though past governments have attempted to put in measures to reduce the impact of the floods, those measures are at best ad hoc. They barely endure the waters.

Just as 3rd June, 2015 was the night during which the torrential rains and its resultant fires that have killed over 100 Ghanaians begun, the night of 3rd June, 1979 was when J.J. Rawlings was freed from incarceration. Again, just as 4th of June, 2015 has recorded over 100 dead bodies from the torrential rains, the same day marks the 36th Anniversary of the June 4 Uprising. Interestingly, former President Rawlings observed the commemorative event before touring the city to witness the charred bodies; the displaced people and the debris of blood, fuel and garbage packaged into a stew of human beings loitered on the streets of Accra! The images are hurting!

So Rawlings, just like John Kofi Agyekum Kufour, John Evans Atta Mills (late) and now John Dramani Mahama; the notable Johns have all failed to give Accra a sense of safety with respect to the annual rains. This is how our leaders make mockery of leadership: President Mahama has already visited the scenes and after saying “we must make sure this doesn’t happen again”, he commiserated with the families of the victims and thanked the aid workers. Then he left. Last year, the President promised to ensure that Accra got adequate drainage systems to prevent a recurrence of the floods. That never happened so today too, he ritually toured the scenes.

Former President Rawlings after having commemorated his June 4th Uprising, returned from the Revolution Square which he created during the PNDC era and upon seeing the havoc whose cause I attribute to be a merger of force majeure and human indiscipline told the journalist that “I wish I have a bulldozer”. Yes, as a Ghanaian, the former President has every right to make this remark in an ostensible anger at how reckless we have become as a people but can he absolve himself from the canker of indiscipline in the city when he ruled Ghana for 19 solid and uninterrupted years? Did he never have those political and machinery powers to clear all structures built under water ways? What stopped him from instituting stringent measures to ensure that a disciplined society was attained? Were there no bulldozers in Ghana when on the 9th of June, 1988, five days after the annual June 4 Anniversary commemoration, Accra recorded a rainfall of 87.09mm? Did he not see how the rains on that day caused havoc, displaced people and destroyed properties?

As expected, Nana Akufo Addo who is hoping to become President also joined the bandwagon of loose-talked leaders in Ghana and described the event as a “dark moment” in Ghana’s history!! Where have they all been when annually Accra records massive floods? This is a clear indication of how leadership is mocked at and the good people of Ghana religiously deceived. The leaders who have sat on the seat of governance; and those waiting to be there have collectively failed Ghanaians!

The Mayor of Accra, Dr. Alfred Okoe Vanderpuije has been in office since 2009 and has seen the annual havoc in Accra. He was recently voted as the best mayor of Africa. He has just hosted all of Africa’s Mayors in the capital and today, he walks around in an apparent show of repugnant empathy to the victims of the rains. What did he do to earn the accolade he so prides himself with? That is how leaders in our part of the world behave and they get bogus awards.

The problem of ineffective leadership must be singled out as the factor. All the Johns of the Fourth Republic have had the bulldozers Jerry Rawlings now dreams of but they failed to use them. The current President does not have the political will to activate the laws and use the bulldozers which the founder of his party now dreams of. Nana Akufo Addo has also served in government in many capacities and indeed he was the Attorney-General and Minister of Justice under President Kufour yet he failed to activate the laws and use the bulldozers. If a whole “Junior Jesus” failed to cleanse the country called Ghana, and the triple-Johns could not tap into the prowess of John the Baptist and John the Apostle, son of Zebedee and Salome, then what can we ever hope for?

What Next?
The Graphic reporter who covered the 9th June, 1988 floods of Accra quoted a driver whose vehicle had been thrown out of motion as questioning when will there ever be an effective drainage system in Accra. The obviously disgruntled driver prophesied that “We shall all one day wake up to realise we are marooned by floods”. That man was not a Duncan Williams, Agyin-Asare, Owusu Bempeh, Mensa Otabil, or any of the many men of cassock with big titles. He was a simple driver but his prophesy repeats itself annually and today, over 100 men, women and children have died in an event of flooding and fires!!

My conclusion is that the word LEADERSHIP is a misnomer in my country Ghana! It does not exist in any form and shape. It is totally an extinct word in our dictionary. It has been banished! The 4th of June, 2015, we have all been marooned by the floods and I daresay that in the years to come, the city of Accra shall repeatedly be in the news for the bad and painful reasons. Whilst that continues to be the case, the political leaders will live in comfort with our taxes stuffing their pockets whilst we the tax payers live in penury!! We must rethink leadership if we are to make progress. Mr. President, kindly use the bulldozers and activate the laws since you have all the time and space to ensure that this does not happen again. Until then, another year of mourning awaits us.