Who are the indicted Fifa officials? 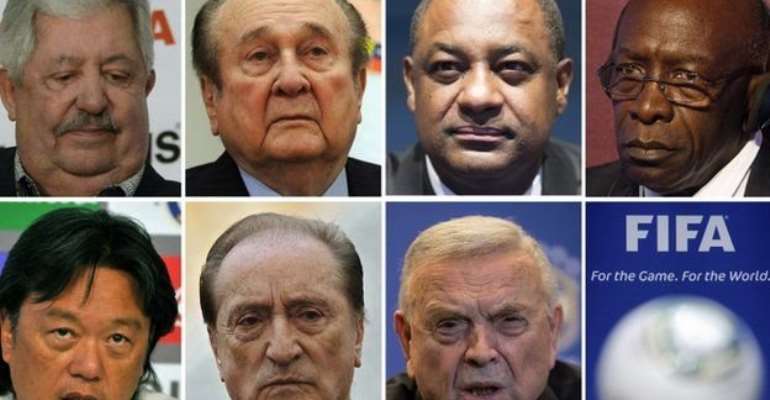 Fourteen people have been indicted on corruption charges by US authorities following an investigation into football's world governing body Fifa. Nine of them are Fifa officials and five are corporate executives.

Seventy-two-year-old Jack Warner from Trinidad and Tobago was a member of Fifa's executive committee from 1983 to 2011, when he resigned amid allegations he had bribed Caribbean associates.

At the time he said he had been "hung out to dry", insisting that the giving of gifts had been part of Fifa culture during his 30 years in the organisation.

He was also president of the Confederation of North, Central America and Caribbean Association Football (Concacaf) until 2011.

After he resigned, Fifa dropped its inquiry into whether he was involved in any corruption.

Mr Warner returned to Trinidad and Tobago, where he became minister of security.

He resigned from the post in 2013 when a Concacaf ethics panel accused him of enriching himself through fraud during his time with the football body. Jeffrey Webb

He succeeded Jack Warner in both posts.
He is also a former member of Fifa's Transparency and Compliance Committee.

He has enjoyed the backing of Fifa president Sepp Blatter, 77, who has singled him out as his possible successor to head Fifa.

He started his time in football governance as president of the Cayman Islands Football Association in 1991. Eduardo Li

Mr Li, a Costa Rican of Chinese origin, is the president of the Costa Rican Football Federation.

He was due to join Fifa's executive committee on Friday.

Mr Li was voted Personality of the Year 2014 in Costa Rica after the national football team stunned its rivals by reaching the quarter-finals in the 2014 World Cup in Brazil.

Journalist Yuri Lorena Jimenez of local newspaper La Nacion described him as "impeccably dressed, spotless, without a hair out of place, nicely perfumed".

She also said that in his office he "was surrounded by good taste: champagne, caviar canapes and refreshing air conditioning".

Mr Li studied civil engineering but only practiced the profession for a few years.

He took over from Walter Niehaus as president of the Costa Rican Football Federation in 2007.

Asked why he had taken on the job, he said that some of its perks were priceless.

"There's no Arab sheikh who can buy tickets to the kind of events us leaders of world football have access to. To witness the Fifa draw for example is one of the great plusses of this job, which certainly is very tricky." Jose Maria Marin

Jose Maria Marin, 83, was president of the Brazilian Football Confederation from March 2012 to April 2015.

He is a former football player turned politician, who served first as deputy governor and later as governor of Sao Paulo state in the late 1970s and early 1980s.

From 1982 to 1988 he held the post of president of the Paulista Football Federation, which manages all official tournaments within the state of Sao Paulo.

He has been at the centre of controversy before.
When he took over as president of the Brazilian Football Confederation in 2012, journalists questioned him about a video which had emerged from a medal ceremony at a youth football tournament in Sao Paulo.

The video appears to show Mr Marin pocketing a medal which should have been given to one of the winning players.

He dismissed the allegation as "a joke". "The medal was provided courtesy of the Paulista Football Federation," he added.

Mr Marin served as special adviser to the organising committee of the 2014 World Cup. Eugenio Figueredo

Eugenio Figueredo was born in Uruguay in 1932.
He is a former president of the South American Football Confederation and a member of Fifa's executive committee.

He played for the Uruguayan club Huracan Buceo and served as its president between 1971 and 1972.

In 1997 he was named president of the Uruguayan Football Association.

He served for 10 years as vice-president of Conmebol, the highest authority in South American football.

In 2013, he replaced Nicolas Leoz as Conmebol president after Mr Leoz was accused of involvement in a bribery scandal.

Nicolas Leoz used to be an influential figure in Fifa, but resigned in 2013

In November 2010, the Paraguayan official was accused by the BBC's Panorama programme of taking bribes in the 1990s from the now defunct sports rights agency ISL.

In 2011, former English Football Association chairman Lord Triesman alleged that Mr Leoz had asked for a knighthood in return for supporting England's bid to host the 2018 World Cup.

Mr Leoz denied both allegations and Fifa later cleared him of demanding a knighthood.

It was later reported that one of Mr Leoz's aides proposed to the England 2018 bid team that Mr Leoz could be tempted into visiting Britain if the FA Cup was renamed in his honour. Rafael Esquivel

Rafael Esquivel is described as "pushy with a strong personality"

Rafael Esquivel has been the president of the Venezuelan Football Federation since 1988.

He is also an executive member of Conmebol.
Born in Spain in 1946, his parents moved to Venezuela when he was four years old to escape the dictatorship of Francisco Franco.

He started his career as a football official in 1972 when he became president of the football association of the state of Nueva Esparta.

Venezuelan players have described him as someone who is "pushy with a strong personality".

A former captain of the national squad said that there "was no friendship or camaraderie" between officials and players under Mr Esquivel's leadership. Julio Cesar Rocha Lopez

Mr Rocha, 64, is currently a development officer with Fifa, tasked with introducing new football projects around the world.

Before taking up a position with Fifa in late 2012, he served for more than 20 years as president of the football federation in his native Nicaragua, and has acted as the president of the Central American Football Union.

He also served as the head of Nicaragua's Olympic committee, and took the team to the 2008 Games in Beijing.

The company paid for Nicaragua's under-20 football team to travel to a tournament. Costas Takkas

A British citizen, Mr Takkas is closely linked to Jeffrey Webb, and worked as an attache to the Concacaf president.

Mr Takkas, 58, also worked alongside Mr Webb in the Cayman Islands, as general secretary of its football association.