So, ex-President Kufuor is now a murderer? 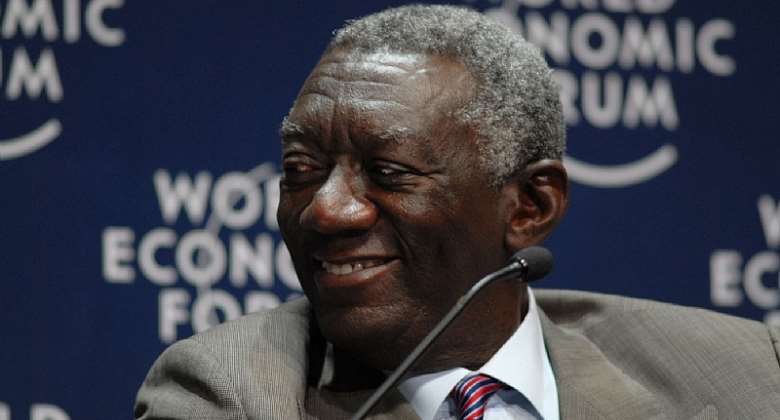 Friday, May 22, 2015
Folks, the problems of the NPP are just beginning to simmer and will boil over for us to know everything that we need to know about its main followers, leaders, and financiers. With that knowledge, we can confidently work for the voters to bury them in the grave that they have dug for themselves.

I have already opined that the acid-bathing of Alhaji Mahama might be a well-calculated move to paint Paul Afoko and Kwabena Agyepong black for them to be forcibly divested of their status and kicked out. Those responsible for the dastardly act could be the hirelings of those setting the stage for the coup against Afoko and Agyepong, two party kingpins known to be disinclined toward Akufo-Addo (for whatever reasons best known to them and the NPP cabal itself).

Although they have denied being anti-Akufo-Addo, happenings long preceding their being voted into office to manage the party's affairs say otherwise. And Akufo-Addo and his "captives" won't forgive them for frustrating their efforts to hold unfettered sway in the NPP. Neither will they forget those happenings. That is the typical spirit of the elephant, the only animal that once offended, neither forgives nor forgets!!

Now, all manner of people who matter in the NPP are out to get at them, immediately urging them to resign because of the chemical attack on Alhaji Mahama and its consequences. Having asked that no one should politicize the chemical attack and to leave it for the police to investigate impartially for the truth to be unearthed, why are they rushing to "corner" Afoko and Agyepong all too soon? Have they already done their own investigation to establish them as the culprits? Painful contradictions!!

As if pointing accusing fingers at Afoko and Agyepong and undercutting them isn't enough, there is much now emerging to prove that the NPP's house of cards is fast collapsing on itself.

"Because of Nana Addo, you will kill somebody...if the police do not deal with the matter well...because of what has happened, the NDC people are happy so they will cover it...Then Afoko can't go out. Kwabena Agyepong can't go out. ...I swear God. Nobody can stop us in the party. In that case we shall collapse the party...if no justice, no peace, I am telling you...Kwabena Agyepong will face the full rigours of the law. Afoko will face it...if they don't face it...you mark it on the wall.

Kwadwo Mpiani's bodyguard said he will kill me...I say we will fight...aaaahhhhh....Kwadwo Mpaini, you and your boss, you are satisfied. You have ruled...we are not afraid of anybody" Kennedy Agyapong ranted. (Source:http://www.ghanaweb.com/GhanaHomeP…/NewsArchive/artikel.php…)

Folks, these are very serious allegations against the Gentle Giant (Kufuor) and Mpiani; and I am all ears to hear them say something about it. The fire burning in this NPP camp is huge and will consume those setting and fanning it, not the John Mahama administration or me.

What Kennedy Agyapong has ranted about has only one ramification: there is every reason to conclude that the NPP is really in total disarray. And his emphasis on happenings just because those he has bad-mouthed are against Akufo-Addo tells me that the NPP is imploding faster than expected.

This is the time to see what the Kapwepwe (Akufo-Addo) can do as a leader of the cabal that he is overly optimistic of putting him in power. As usual, he is evasive, choosing to be in Europe and throwing about his Lilliputian stature and making misguided utterances characteristic of an unfulfilled Shadow President. A Shadow President he will be till death do him part. My prophecy with my eyes wide open!!

The tide isn’t favouring Afoko and Agyepong, clearly because those masterminding their sidelining are in Akufo-Addo’s camp. Now that the time-bomb has exploded, how will Akufo-Addo patch differences? With a clean conscience? Where is it?

He has been damaged all the more by Kennedy Agyapong and no matter what damage control efforts he makes, it will be difficult for him to claw back the confidence of Kufuor and all those offended by Agyapong’s rants. How easy isn’t it for these power-hungry people to destroy their own chances?

Given the challenges facing the Mahama administration, it might be easy to conclude that the NPP stands a clear chance of being voted into office at Election 2016. But from what has emerged so far, that conclusion is difficult to make. Will Ghanaians put in office those who can’t manage their own small party’s affairs?

I have all along been stubborn in saying that the inadequacies of the Mahama-led administration may not necessarily motivate the electorate to vote it down and that it would be politically immature for Akufo-Addo and his camp to harp on those inadequacies to win voter support. Their own inadequacies will be considered. Truly, such inadequacies are being displayed here and there. Scary!!

From the look of things, what has emerged so far is just the inkling of the deeper-level problems that the NPP constitutes. The tip of the iceberg; and I have already dismissed the NPP as anathema to Ghanaian politics. The real mass of ice will surface soon to make the NPP all the more unattractive. Ghanaians will not commit political suicide to put such a party in power. Is this not how God seeks to expose and punish these NPP people for calling his name in vain and attempting to twist his arms to favour them after losing Elections 2008 and 2012? Truly, the NPP’s battle is still of the Lord!! A battle lost before it even begins!!

At this stage, one fact is clear and must not be missed: The mindset of Kennedy Agyapong is admired by Akufo-Addo and all those seeing him as their sacred cow. It is that mindset which informs what Agyapong does in the NPP to prove that "money swine" is to be respected. And being a major financier of the Akufo-Addo bid to become Ghana's President "at all costs", Agyapong knows what he is about.

Unfortunately for him and those thinking like him or supporting him, the serious allegations that he has just made about ex-President Kufuor and Kwadwo Mpiani will have very damaging effects for him and the NPP, generally. After all, both Kufuor and Mpiani have already contributed their quota to Ghana’s development efforts and are not interested in returning to power. They have nothing to lose and will be remembered for whatever they did between January 7, 2001 and January 7, 2009. It is Akufo-Addo who is avid for power and moving his own hell of a party to support his bid. He has a lot to lose and will lose!! The NPP stands to lose in this in-house battle of nerves and careless utterances!!

As an avowed hater of this NPP political trash, I am happy that all the dirty linen that they have stored in their closets all these years is now being brought out into the open to be washed in public. A sight for sore eyes, indeed!! More of those, my Pharisees of Ghanaian politics.