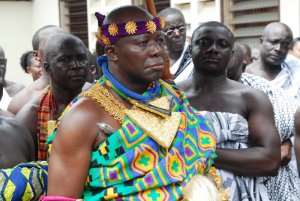 Your Majesty the King,

It behoves me to convey the underlying issues to your attention in case you will act upon them in a manner befitting the status of a responsible, sensibly intelligent and a wise great King of the Ashantis.

Unlike your other Asanteman “Amanhene”, I am not going to tell you the sweet words or the glad tidings you always want to hear, but the truth as it has to be told. You will only avoid the imminent wrath of God that is looming upon you provided you will act swiftly sensibly in a manner that justice, but not vanity, will be your guidance.

You have by your untoward actions, brought your self-esteem so low. In so doing, you have immensely tarnished the reputation of Ashantis in particular, and the Akans in general. You have disgraced your predecessors by bringing shame upon the Golden Stool.

Look at some of the instances of the acts you have committed or allegedly committed that are normally or never expected of an Ashanti King or any of the Asanteman chiefs.

In 2006, your name was either rightly or wrongly linked with some cocaine scandal. This had to do with some missing 77 parcels of cocaine from MV Benjamin vessel, in which the names of Police Commander Kofi Boakye, Tagoe, Abbas and the late Alhaji Moro were mentioned as victims, witnesses, investigators or accomplices. Why was your name mentioned but not that of any other chief or King in Ghana? There is a proverb that says, “Show me your friend and I shall tell you your character”. Find details of the cocaine saga from the web link below:

In 2012, you carried some “Nanamon” antiquated jewels to Oslo, Norway. You alleged the jewels had been stolen from you. However, many a Ghanaian that has mistrust for you thought “3nokwa no no” (him again), he has sold them. Why on earth would your own subjects disbelieve you if you had all along not been acting suspiciously or dishonestly?

In 2013, you were nationally perceived or alleged to have played an underhand role that tampered with justice, with regard to the declaration of verdict on Election 2012 petition by the “Atuguba's” Supreme Court. You have decided never to be mindful of the fact that when there is injustice, there is uprising. What at all went through your mind that compelled you to bribe some judges to twist the truth, and hence the verdict, in favour of your openly declared best buddy, President John Dramani Mahama? Are you happy about the mess that he is making of the country? You may not care because as selfish and insatiably greedy as you are, you get whatever you want so who else do you have to care about.

You have been desirous to arrogate to yourself traditional and constitutional powers you have absolutely no right to. You have declared yourself to be above the laws in Ghana simply because President John Mahama is your best friend and also, the Ghana judiciary can easily kowtow to you, because of their corrupt nature.

You know, or if you do not know, I am telling you that you have utterly no right under the Sun, the moon and the stars, to meddle in Kumawu stool disputes, let alone, imposing a dummy or a puppet on Kumawuman as their paramount chief (Omanhene). From your forebears, Ankyewaah Nyame through Brempomaa Piesie, Manu, Nana Oti Akenten, Nana Osei Tutu I to Otumfuo Opoku Ware II, which of them dared interfere in Kumawu stool affairs? None of them did. This is because they had not been bestowed with the powers or rights to do so. As knowledgeable, cautious and always aspiring to keep the Asante Confederacy or Asanteman together, they did not behave in any wayward manner as you are doing.

In your own eyes, you are an Asante Overlord with unrestricted powers. Whoever tells you that you have the powers to do as you want in Asanteman when you want is only deceiving you. There are laws that forbid you from behaving like a powerful monarch in this 21st Century Ghana.

Mind you, “Sika ani bre da owuo afa” literally translated as, “Death is inherent in uncontrolled fascination with wealth acquisition”. You have been colluding with ineligibles to plunder the wealth of their Traditional Council areas, steal their lands and then enthrone them as chiefs of their Divisions. This attitude of yours has been creating problems for not only the citizens of those areas fallen victims, but also, to the other Asante Amanhene and yourself.

Read all my prophetic publications about you. Hiding behind the short, but not the long, arm of the law, because of your friendship with John Mahama who has been orchestrating his nonsensical “Order from above” in your favour, will lead you nowhere. When God speaks, who are you or who are President Mahama, Police Commander Kofi Boakye, Joseph Yammin and all your NDC comrades to save you from His fiery anger?

You have brought Asanteman into disrepute. You have brought shame upon yourself and your ancestors. Your stubborn attitudes bordering on pure thievery and your eagerness to involve yourself in condemnable crimes that have the potency to mar the reputation of your entire Asante or Akan tribe are overwhelmingly abhorrent and hence despicable.

Would mind going right away on your knees to beg for God's forgiveness of sins, then come out publicly to apologise to all those people that you have offended, especially the people of Kumawuman? It takes a man to say sorry.

Kumawuhemaa and her Ankaase family members are not anywhere near being the descendants of Barimah Tweneboah Koduah I, let alone, being his matrilineal descendants. You knew the truth but you chose to lie for reasons best known to you. See how you made a big fool of yourself, claiming on video posted on YouTube titled, “Asantehene involves in corruption” that your ancestors went to the North (“Esremu”) to look for tall men to come and sleep with their women to give birth to strong and tall males who in turn became chiefs or kings. You said all this in the hope of justifying your prejudiced evil intentions of imposing a puppet on Kumawu as her Omanhene with whom you can easily swindle the people.

You claimed to have built tough skin in your public life. You purport not to give a hoot about whatever anyone says about you when you are executing the desires of your heart. Why are you always bemoaning the failure of your other colleague-Amanhene to rally to defend you whenever you are being ridiculed in the media? Can't you go it alone? It is said, “If you can't do the time, don't commit the crime”

Finally, be it known to you that you cannot hide behind the security forces and your friendship with President Mahama to suppress the popular wish of the citizens of Kumawuman. They are by their majority supportive of Barimah Tweneboah Koduah V, but not that puppet (Barimah Sarfo Tweneboah Koduah) you have illegally imposed on Kumawuman.

Remember the fate of King Herod (Herod Agrippa) as at Acts 12, especially Acts 12:21-22 – “21 On a chosen day Herod put on his royal robes, sat on his throne, and made a speech to the people. 22 They shouted, “This is the voice of a god, not a human!” 23 Because Herod did not give the glory to God, an angel of the Lord immediately caused him to become sick, and he was eaten by worms and died”.

Additionally, remind yourself of “The Parable of the Rich Fool” as at Luke 12:18-20 …18"Then he said, 'this is what I will do: I will tear down my barns and build larger ones, and there I will store all my grain and my goods. 19And I will say to my soul, "Soul, you have many goods laid up for many years to come; take your ease, eat, drink and be merry."' 20"But God said to him, 'You fool! This very night your soul is required of you; and now who will own what you have prepared?'…

Has anyone won a contest against God Almighty? Not as far as I am aware of. If nobody has ever engaged God in a fight and won, so shall you not win? The physical battle you are waging against the Lord's anointed one (Barimah Tweneboah Koduah V) and his massive supporters is in fact, a spiritual battle you are involved in against God. You never knew that, but today, you have been made aware of the situation. Should you persist in your selfish, insatiably greedy and evil intentions, then the fate of King Herod or the rich fool SHALL be your portion.

I am never disrespectful to you but do chastise you for being obstinate, callous and unremorseful. “A word to the wise is enough” as “Obstinacy is the cause of the horns of the hornbill”

Finally, be aware that rushing to celebrate the 80thanniversary of the Ashanti Confederacy on Saturday, 31 January 2015 as you have cunningly programmed will not do you any good. It cannot rally the support you so desperately need for you. All that you need doing is to change your character for the better. You should never dare send any criminal squad against any Kumawuman citizen. Should you do that, your reign will come to an abrupt end, by the design of God Almighty.