Developments Made In Herbal Medicine Practice In Ghana 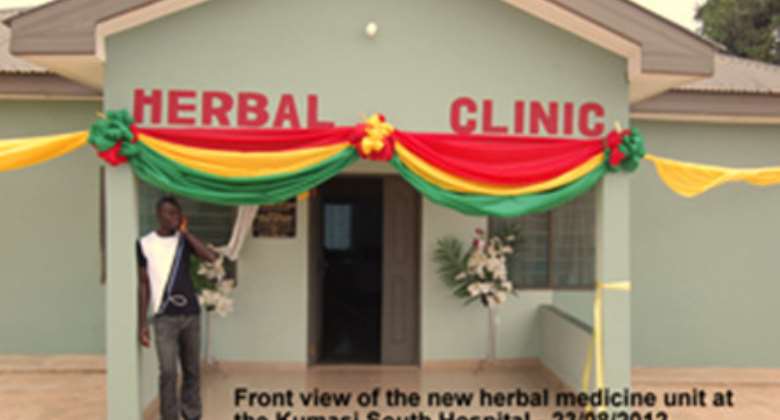 Herbal medicine is an ancient medical system that has provided the world's population with safe, effective and affordable medicines for at least some 60,000 years and even today the populations of developing countries worldwide continue to rely heavily on plant medicines for their healthcare needs. In Germany, 90% of the population have used a natural remedy at some point in their life. Since 1993, all doctors trained in Germany have studied herbal medicine as part of their training. Globally, there is now a general recognition that the medicines once described as primitive could be mankind's saving grace and so within the past two decades, the views of herbs as medicines moved from that of “witches brew” to major medicine.

In Ghana, efforts to promote traditional medicine practice started with the creation of the Ghana Psychic and Traditional Healers Association in 1961 by Dr. Kwame Nkrumah. The association aims at upholding, promoting and protecting the best in psychic and traditional healing in Ghana. This was followed up by the establishment of Danfa Health Centre which aimed at training traditional birth attendants(TBA) in 1964 with assistance from the United States Agency for International Development (USAID).

In 1975, Centre for Scientific Research into Plant Medicine (CSRPM) now Centre for Research into Plant Medicine was established at Mampong-Akuapem, Eastern region of Ghana to conduct and promote research for the improvement of phytomedicines or plant medicines. The institution which is also an agency of the World Health Organization(WHO) has developed 35 well researched plant based products. The Primary health training for indigenous healers project(PRHETIH) organized by the Ministry of Health (MOH) and the Catholic Holy Family Hospital followed in 1979. Pharmaceutical sector survey was done with reference to Traditional Medicine production capacity needs in 1985.

In 1991, the Traditional and Alternative Medicine Directorate was set up within the MOH headed by a deputy director to strengthen and give direction to the development and promotion of traditional medicines in Ghana with special emphasis on Herbal medicine. This was then followed by the promulgation of Food and Drugs Laws 1992, PNDCL 305B and Traditional medicine Act 2000, to regulate herbal medicines and the practice of Traditional medicine in 1992. The Technology Transfer Centre of the Centre for Scientific and Industrial Research responded to the World Health Organisation's recommendations of an inclusion of scientifically proven, innocuous, effective traditional remedies in the drug policies of member states in 1991 by initiating the preparation of an Herbal Pharmacopoeia by a team of experts “ to accelerate the process of diffusion and absorption of herbal medical technology in Ghana”. The first edition of this Pharmacopoeia, The Ghana Herbal Pharmacopoeia(GHP) was launched in 1992.

In 2001, a bachelor of science degree in Herbal Medicine was introduced at the faculty of pharmacy, Kwame Nkrumah University of Science and Technology (KNUST). The programme trains in basic medical, pharmaceutical and social sciences and aims at producing healthcare professionals (Medical Herbalists) who will provide primary healthcare using quality, safe, effective and standard herbal medicines. This training involves two other institution aside Knust : Centre for Research Into Plant Medicine and the Tetteh Quarshie Memorial Hospital all in Akuapem-Mampong, Eastern region of Ghana. Herbal medicine graduates after their national service continue their training in Akuapem-Mampong with the institutions mentioned above. They are taking through six months of research into plant medicine and another six month of intense clinical training at the Tetteh Quarshie Hospital where they are taught to identify cases for referrals, emergencies, primary healthcare, etc. Professional exams is then organized for them by the Traditional Medicine Practice Council (TMPC), after which upon passing the exams, they are given professional license to practice as clinicians(Medical Herbalists) in a herbal facility like clinics and hospitals.

The Traditional and Alternative Medicine Directorate was elevated to a full Directorate headed by a director in 2003. Introduction of code of ethics and standard of practice for traditional medicine practitioners to infuse professionalism into the practice followed. Ghana National Drug Policy (Ministry of Health, August 1999) which aims at promoting research, development and rational use of herbal medicines was revised in 2004. Traditional medicine practice Act, Act 575 came into being in the year 2000 but became operational when the Traditional Medicine Practice Council (TMPC) was set up in 2010. This was followed by the release of the 2nd edition of the Ghana Herbal Pharmacopoeia (GHP) in 2007.

In September 2012, clinical herbal medicine practice was integrated into the main healthcare delivery system in Ghana by the ministry of health after piloting of herbal clinics in selected government hospitals nationwide commenced in 2011. The integration was pushed for by the leaders of the Ghana Association of Medical Herbalists (GAMH) with support from the Business Sector Advocacy Challenge Fund (BUSAC) and SMILE Ghana. The pilot operation as at 2012 covers about 18 government health facilities nationwide. The leadership of GAMH are currently embarking on another advocacy to get their services covered by the National Health Insurance Scheme (NHIS) as most patients that visit these pilot centers are NHIS card owners and cannot afford the services of the Medical Herbalists there.

Government Hospitals with Herbal Medicine Units in Ghana and their locations