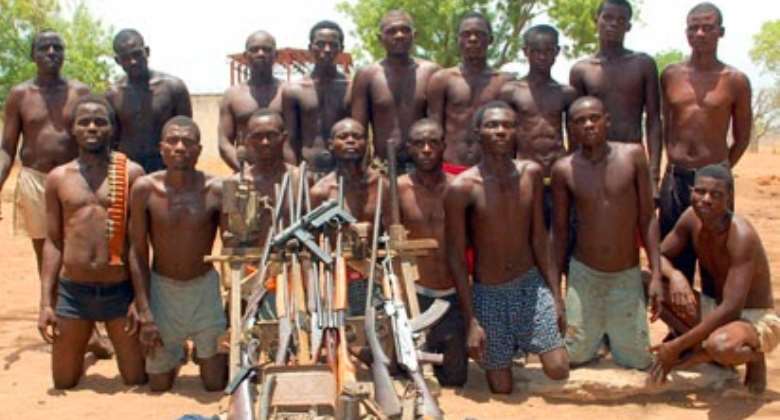 ………..Quran does not urge Muslims to commit violence against Christians, it calls them “nearest in love” to the Muslims! The reason given is their piety, their ability to produce holy persons dedicated to God, and their lack of arrogance and pride…………….

The Daily Heritage Newspaper in Ghana deserves commendation for bringing to the fore activities of a group that is visiting mayhem on innocent citizens in parts of Eastern Region. The group mainly young men are said to be opposed to Muslims dealing with Christians. They have succeeded in taking the law in their hands by subjecting their victims that include women to lashes and other punishments. This has led to people calling them Boko Harram's arm in Ghana.

Confirming the story of the paper, the Public Relations Officer of the Eastern Regional Police Command, ASP Yaw Nketia Yeboah explained that the police became aware about activities of the group from the media and has launched investigations and laid surveillance in the Zongo Community at Akyem Ofoase leading to the arrest three members of the group.

ASP Yeboah added that the Eastern regional police command is on the ground to fish out the other suspects in their hideouts to face prosecution.

the Eastern regional police commander, DCOP Yaagy Akuriba is said to attach seriousness to the unfortunate incident by digging deep into the matter to ascertain the root cause and masterminds behind the formation of the replica Nigerian militant group, Boko Haram.

Boko Haram, literally meaning ''western education is abominable'' is an Islamist extremist group responsible for terrorizing many civilians and abduction of more than 500 women and girls in its five-year insurgency in Nigeria.

After the group's founder was killed by the Nigerian police in 2009, his followers went underground, swearing vengeance increasing their attacks on villages, government buildings, police stations, prisons, churches and even mosques.

Many African countries including Ghana have strengthened their security set up to prevent the Islamist group from spreading its tentacles to the country.

Currently almost all good Muslim leaders in nations across the world condemn the activities of Boko Harram and other such groups as non Muslims. What they do in all parts of the world including Nigeria represent terrorism and cannot be said to be Islamic

it is impossible for the likes of Boko Harram to operate in Ghana. and reasons are simple. Muslims in Ghana accept the secular nature of our nation whose constitution guarantee freedom of worship. Muslims and Christians have been living together in the same communities, markets, schools and workplaces. We attend meetings together to discuss issues of national importance

Together with the Christians we consider Boko Harram militants as terrorists and people who must not be tolerated in our midst.

The following are Quoranic and Islamic quotations to back the reasons why Muslims in Ghana cannot support activities of Boko Harram which is considered a terrorist group.

1. Terrorism above all involves murder. Murder is strictly forbidden in the Qur'an. Qur'an 6:151 says, “And do not kill a soul that God has made sacrosanct, save lawfully.” (I.e. murder is forbidden but the death penalty imposed by the state for a crime is permitted). 5:53 says, “… whoso kills a soul, unless it be for murder or for wreaking corruption in the land, it shall be as if he had killed all mankind; and he who saves a life, it shall be as if he had given life to all mankind.”

2. If the motive for terrorism is religious, it is not permissible in Islamic law. It is forbidden to attempt to impose Islam on other people. The Qur'an says, “There is no compulsion in religion…………..” (-The Cow, 2:256). No other verse of the Qur'an contradicts this particular verse. Whoever imposes Islam or any other religion on anybody does so against the dictates of the Holy Qur'an.,

3. Islamic law forbids aggressive warfare. The Quran says, “But if the enemies incline towards peace, do you also incline towards peace. And trust in God! For, He is the one who hears and knows all things.” (8:61) The Quran chapter “The Cow,” 2:190, says, “Fight in the way of God against those who fight against you, but begin not hostilities. Lo! God loveth not aggressors.”

4. In the Islamic law of war, not just any civil engineer can declare or launch a war. It is the prerogative of the duly constituted leader of the Muslim community that engages in the war. Nowadays that would be the president or prime minister of the state, as advised by the mufti or national juris-consult. What we witness nowadays is for self-seeking individuals to constitute themselves into a terror group for political reasons and then use the name of Islam, misinterprets the Quran and hood-wink the youth into these acts of stupidity.

5. The killing of innocent non-combatants is forbidden. According to Sunni tradition, 'Abu Bakr al-Siddiq, the first Caliph, gave these instructions to his armies: “I instruct you in ten matters: Do not kill women, children, the old, or the infirm; do not cut down fruit-bearing trees; do not destroy any town . . . ” (Malik's Muwatta', “Kitab al-Jihad.”)

6. Sneak attacks are forbidden. Muslim commanders must give the enemy fair warning that war is imminent. The Prophet Muhammad at one point gave 4 months notice.

7. The Prophet Muhammad counseled doing good to those who harm you and he was said to have commanded, “Do not be people without minds of your own, saying that if others treat you well you will treat them well, and that if they do wrong you will do wrong to them. Instead, accustom yourselves to do good if people do good and not to do wrong (even) if they do evil.” (Al-Tirmidhi)

8. The Qur'an demands of believers that they exercise justice toward people even where they have reason to be angry with them: “And do not let the hatred of a people prevent you from being just. Be just; that is nearer to righteousness.”[5:8]

9. The Qur'an assures Christians and Jews of paradise if they believe and do good works, and commends Christians as the best friends of Muslims. I wrote elsewhere, The Quran does not preach violence against Christians. Quran 5:69 says “Surely they that believe, and those of Jewry, and the Christians, and those Sabeaans, who so believes in God and the Last Day, and works righteousness–their wage waits them with their Lord, and no fear shall be on them, neither shall they sorrow.”

In other words, the Quran promises Christians and Jews along with Muslims that if they have faith and works, they need have no fear in the afterlife. It is not saying that non-Muslims go to hell– quite the opposite. Isn't it therefore an act of madness to want to separate Muslims from Christians, save the lives of Muslims and cause all Christians to perish?

Quran 5:82. ” . . . and you will find the nearest in love to the believers [Muslims] those who say: 'We are Christians.' That is because amongst them are priests and monks, and they are not proud.”

So the Quran not only does not urge Muslims to commit violence against Christians, it calls them “nearest in love” to the Muslims! The reason given is their piety, their ability to produce holy persons dedicated to God, and their lack of overweening pride.