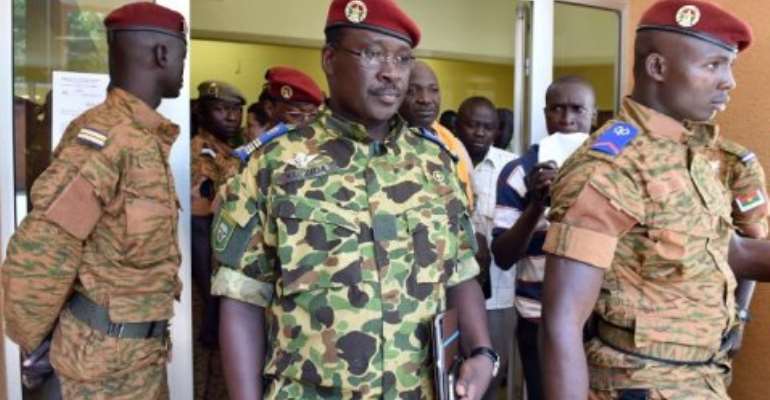 After over a week of intense discussion between opposition parties, mass organizations and religious leaders of Burkina Faso, there was an announcement made on Nov. 10 that a roadmap had been agreed upon for a transition to civilian rule.

This consensus among the political parties and mass organizations must now be negotiated with the military to set the terms of the transition.

Popular organizations had rejected the military's attempt to lead a transition team. Three leaders from Ghana, Nigeria and Senegal representing the regional Economic Community of West African States (ECOWAS) visited the capital of Ouagadougou on Nov. 7 calling for a rapid process that would lead to national elections. The plan put forward from discussions among the opposition parties and mass organizations is calling for elections by Nov. 2015 after the appointment of an interim civilian president to guide the entire process.

Earlier on Oct. 30, demonstrations attended by hundreds of thousands demanded the resignation of the 27-year dictator President Blaise Compaore. When members of parliament were set to approve a bill that would have provided legal cover for Compaore to run for another term of office, thousands gathered outside the Place de la Nation while many stormed the parliament, the ruling party headquarters and other symbols of authority, setting them on fire.

To prevent further unrest, the Gen. HonoreTraore was selected by the military to head a new government, terminating the parliament and declaring a nighttime curfew. Eventually, Compoare resigned on Oct. 31 and fled to neighboring Ivory Coast.

Nonetheless, by Nov. 1, Gen. Traore had been removed by the military and replaced by Lt. Col. Zida. By the following day thousands re-entered the streets telling Zida that he must also go and pave the way for civilian control.

The ousted leader Compaore had come to power in Oct. 1987 after leading a coup against Capt. Thomas Sankara, a Marxist revolutionary leader and theoretician who had also taken charge through a seizure of power four years earlier. Sankara attempted to break with the legacy of French neo-colonialism advancing a program of self-reliance, women's liberation and international debt cancellation for Africa.

France and its allies in the region were suspected of being behind the overthrow and assassination of Sankara. In recent years the U.S. has escalated its military and intelligence presence in West Africa as well, even among those states previously considered within the strategic interests of Paris.

Compaore was a participant in the U.S. Africa Command (AFRICOM) counter-terrorism operations in West Africa. These programs include a presence for Pentagon personnel within the country and the training of military officers in the U.S. so that they can be more effective in carrying out Washington's aims on the continent.

The Washington Post wrote on Nov. 3 that “In 2012, when he was a major, Zida attended a 12-day counterterrorism training course at MacDill Air Force Base in Florida that was sponsored by the Defense Department's Joint Special Operations University, said Army Lt. Col. Mark R. Cheadle, a spokesman for the U.S. Africa Command. That same year, Zida attended a five-day military intelligence course in Botswana that was financed by the U.S. government, Cheadle said.”

This same article continues saying “The U.S. military has developed a close relationship in recent years with Burkina Faso, which has allowed the Pentagon to operate a secretive Special Operations base that it uses to conduct reconnaissance flights across West Africa.” Interestingly enough, the U.S. government, which officially says that it cannot conduct normal relations with states where the military has seized power, has not labeled the current situation in Burkina Faso as a coup.

In recent African history, the leader of a military coup in Mali during March 2012, Capt. AmadouSanogo, was also trained in several Pentagon bases in the U.S. Also the military seizure of power in Egypt during early July 2013 was carried out by Field Marshal Gen. Abdel-Fattah al-Sisi, a former student in Pentagon training programs.

The Egyptian military has longtime ties with the Pentagon and the Central Intelligence Agency (CIA). Similar to the current situation in Burkina Faso, the July 3, 2013 seizure of power by El-Sisi, who is now president of Egypt, was not described as a coup by Washington.

Over a billion dollars in assistance is provided by Washington to the Egyptian military every year. This state of affairs has prevailed for over three decades.

With respect to the Pentagon counter-terrorism program in West Africa, the Washington Post noted in 2012 that “A key hub of the U.S. spying network can be found in Ouagadougou, the flat, sunbaked capital of Burkina Faso, one of the most impoverished countries in Africa. Under a classified surveillance program code-named Creek Sand, dozens of U.S. personnel and contractors have come to Ouagadougou in recent years to establish a small air base on the military side of the international airport.” (June 13, 2012)

Burkina Faso is now an emerging mineral producer attracting foreign investment from firms in the leading capitalist states. The country is the fourth largest producer of gold on the continent and mining activities in other areas are underway.

These factors will largely determine the Pentagon and CIA role in keeping this West African state under U.S. and French influence. In order for the country to embark upon a genuine path towards development and sovereignty, the anti-imperialist forces among the opposition and mass organizations must end the state's collaboration with AFRICOM.

The events since Oct. 30 in Burkina Faso have sparked hope upon among the African workers, farmers and youth throughout the region and beyond. A political program of independence and anti-capitalist development must emerge in order for the gains of the popular struggle to win concrete results that benefit the majority of the poor and exploited population inside the country.