NDC Will Again Win The Elections In 2016. Period! 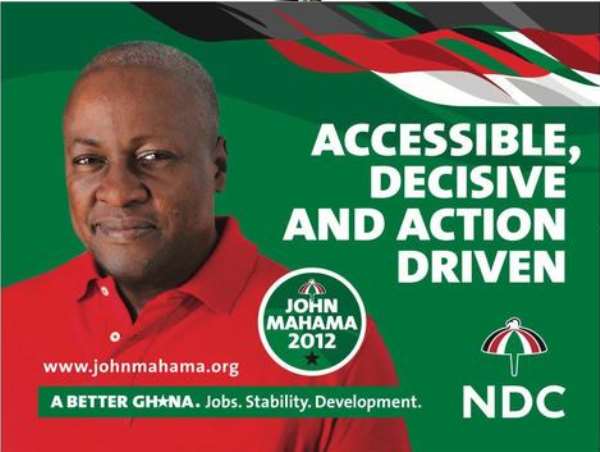 I know the title of this article alone will drive some people crazy but that is the truth. I am telling them the truth and I hope the truth shall set them free.

At the NPP Congress in Sunyani in 1998, presidential aspirant, Nana Akufo-Addo said and I quote, “Anybody who becomes the NPP's Presidential Candidate has already secured 30% of the total valid votes. The rest – 20% plus 1, is what the candidate needs to work on to become the President. Failure to achieve this calls for a change in leadership” This was when candidate Agyekum Kuffour was going for the second time to become the presidential candidate of the NPP. Nana Akufo-Addo was challenging him for the same slot.

Having the above statement in mind, Nana Akufo-Addo did everything possible within his power, might and wisdom to win elections 2012. He first started with a “Thank You Tour” throughout the country after he was defeated by Prof. Atta-Mills in the 2008 elections. Nana Akufo-Addo used the tour to test his popularity amongst the followers of NPP. I find it strange for someone who was defeated in a just ended election to go on a “Thank You Tour.” But the whole idea behind the “Tours” both in 2008 and 2012 was to let NPP supporters think that, the NPP won the elections but the verdict was stolen from them. – Wrong.

Immediately after the “Thank You Tour,” Nana embarked on a “Listening Tour.” This tour took him to places across the country. It was during this “Listening Tour” that a picture came out that showed Nana eating with a poor woman in a village. The idea behind that picture was that Nana was a humble guy who would be the best president Ghana could ever have. – Wrong.

During the same period for elections 2012, Nana Akufo-Addo visited Europe and also Israel. After visiting Europe and the Middle East, Nana came down and at a meeting in the Eastern Region, he told the members gathered that the election 2012 was an “all die be die” affair. Nana Afufo-Addo appointed two very effective Communication Directors namely Nana Akomea and Sammy Awuku. These two men could speak to the base of the NPP but not to Ghanaians. One thing I liked about Messrs Akomea and Awuku was that they spoke as if the elections were going to be held amongst NPP operatives; therefore whoever wins is an NPP.

During campaign for elections 2012, Nana and his campaign managers tried in vain to use the Wayome scandal and judgment debt to their advantage; Dr. Mumuni Bawumia was sent to the North for over 7 days whilst Nana stayed in the Volta Region. All Dr. Bawumia was sent to do was to break the strongholds of the NDC, by telling the Northerners that he is also from the North. Unfortunately for the NPP, the Northerners knew the difference between an NDC Northerner who is the President, and an NPP Northerner who is the Vice President. They showed that on Election Day. Then finally came the most useless campaign slogan in Ghanaian history. That was the Free Senior High School Education. Nana made the NPP members to think that the Free Senior High School Education was the only solution to all Ghanaian problems. Once Free Education is established, Ghana becomes like heaven on earth. Again let me remind you that, Nana did all these things to be able to win 20% plus 1 of the total valid votes.

So if Nana Akufo-Addo could do all of the above and yet did not win the 20% plus 1 of the total valid votes, what else could he do differently in 2016? The NPP has already reached its peak and it is about to fall. They, in both 2008 and 2012 exhausted all their campaign strategies, campaign messages and campaign promises. As Nana Akufo-Addo has become the flag bearer of the NPP for election 2016 through bribery and corruption, his strategies, messages and promises will be the same old, same old. That is, to negatively criticize and insult the government for no reasonable reason. You watch!

Nana Akufo-Addo bribed the Regional Chairmen to win the primaries and paid 600,000 Ghana cedis to bribe the 140,000 delegates and in the process corrupted all his campaign team. Has Nana's desperation to become President allowed himself to be corrupt? Maybe, Nana has been corrupt since birth but it is now that frustration has exposed him. Now that we know Nana bribes to win, he should be prepared to bribe all the 15 million voters or else he should forget the 2016 elections.

In Ghana now, alternative suggestions and solutions win elections but unfortunately the NPP don't have them. All they have are insults, lies, bribery and corruption. This is why I say, NDC will again win the elections in 2016. If you have any problems with that, the entire sea is there for you to burn.