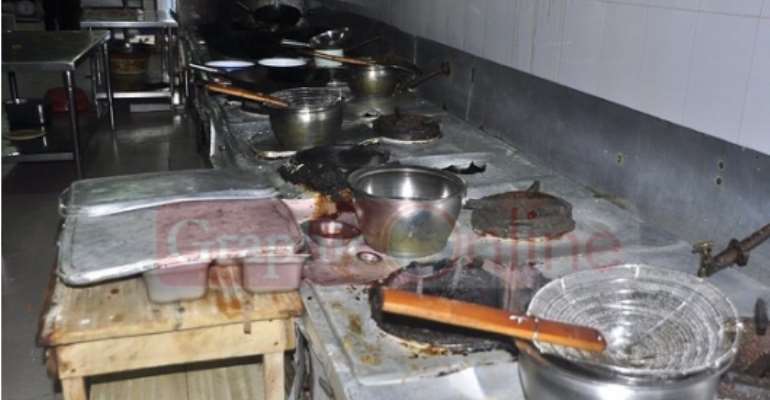 The Accra Metropolitan Assembly (AMA) yesterday took its fight against cholera to Osu in Accra with the closure of the Dynasty Chinese Restaurant. The move is part of a crackdown on unhygienic restaurants, eateries and chop bars in the capital in the wake of a cholera epidemic that has left more than 130 people dead.

A team from the Public Health Directorate of the AMA led by its Director, Dr Sampson Anim Boateng, decided to close down the restaurant because it had an unhygienic kitchen, algae-infested surroundings close to the kitchen and grease and soot had accumulated on the heat extractors in the kitchen.

A defective gas cylinder in the kitchen had a stone on top of the regulator, probably to prevent a leakage of the gas.

Frankies and Noble House
Apart from Dynasty, two restaurants in the area—Noble House Chinese Restaurant and Frankies Hotel and Restaurant received cautions to rectify some anomalies in their operations or risk closure.

At Frankies, the team expressed concern about ongoing renovation works at the ground floor of the building, while some kitchen staff peeled onions nearby. There were also gas cylinders in the renovation area where electrical wires were dangling.

The restaurant, the AMA officials insisted, was operating without a Health Suitability Report; a permit that indicates that the health check list of the AMA had been adhered to.

In the kitchen, most of the staff worked in inappropriate garbs and cobwebs were everywhere.

At Noble House, the management of the company was asked to remove the cobwebs, clean the heat extractor fans that had accumulated grease and ensure that the kitchen staff were appropriately dressed.

Management of the restaurant agreed to carry out the directives.

Interestingly, in all of these restaurants, the dining areas were clean and well decorated.

Confronted with anomalies, the Manager of Frankies, Mr Samir Taleb, who was apologetic, said he would ensure that the anomalies in the kitchen were rectified immediately.

He added that the ongoing renovation had given the restaurant space constraints but assured the AMA officials that the right thing would be done.

Dr Boateng observed that besides the cholera epidemic, the Melcom Disaster in November 2012 was still fresh on the minds of Ghanaians.

“We can't joke with the life of a single person. It is important that where people patronise food should be kept in safe and hygienic conditions. That is a mandate I will not compromise,” he said.

He, therefore, directed the management of the facility to complete the renovation within a month or risk closure as public safety was important.

Dr Boateng discredited claims that the AMA was only targeting chop bar owners and said that the directorate would continue with the unannounced visits to “every place food is cooked and sold. This is not a selective exercise.”

Other places
The team also went to KFC where the team expressed satisfaction with the general appearance of the kitchen and storage facilities.

It, however, urged management of Tip Top Chinese Restaurant to keep its kitchen windows clean; a suggestion that the manager of the restaurant agreed with. The restaurant's manager indicated that management had planned to change the window net tomorrow.

Ahead of yesterday's exercise, 30 chop bars were closed down at Agbogbloshie, also in Accra, for selling under unhygienic conditions last Tuesday.

On Tuesday, food items being sold by the chop bars were destroyed to prevent their sale to unsuspecting members of the public.