TB Joshua: The Collapse Of A Charlatan 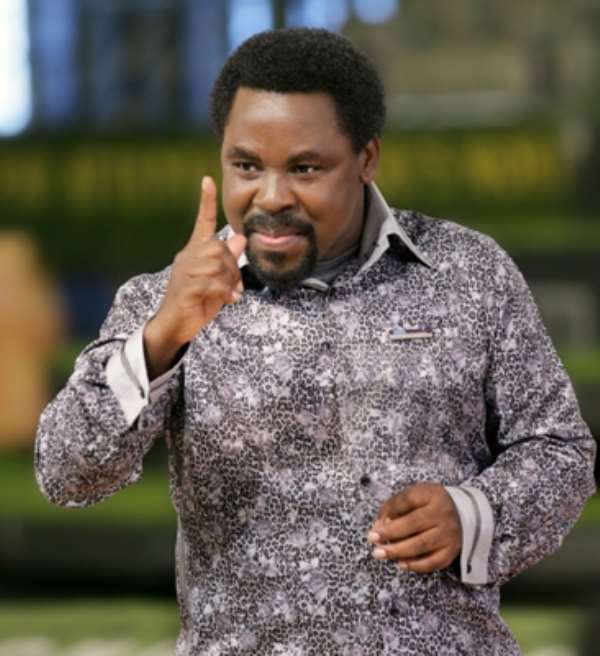 The popular maxim that says “Like father like son” applies to TB Joshua and his now discredited ministry. We can rightfully say “Like building like pastor”. The recent tragic incident at T B Joshua's church in Lagos signals the slow and gradual crumbling of a mega charlatanic ministry being spearheaded by one of the most notorious evangelical con artists Nigeria has ever known.

T B Joshua has since the nineties mined the gullibility and nincompoopery of Africans using fake, forged and fraudulent miracles cure claims and prophecies. But it took just a little architectural oversight to expose the schemes and pretensions of this charlatan.

Well if you are still in doubt then just go to Lagos and observe the emergency workers as they search through the rubble of the building that belongs to a man who claims to have supernatural powers. But he could not use the powers to prevent the collapse of his own building. Is that not incredible?

Go to the Synagogue church and witness as rescuers are pulling out dead bodies of people who came all the way from South Africa to receive their healing only to meet their untimely death.

T B Joshua's Synagogue has turned to a necropolis of miracles and those who came to seek miracles.

I mean here lies a man who shamelessly flaunts his supposed healing powers; a man who claims he could cure all kinds of diseases including HIV and AIDS. Here is a man who claims to have prophesied the death of presidents and celebrities but who could not foresee and prevent the tragedy in his own church?

I mean T B Joshua I want to ask you, what happen to your prophetic sight and sense? You foresaw the death of the president of Malawi right? But you could not foresee the collapse of your own church building and the death of over 100 of your guests? Do you have supernatural powers to foresee anything at all? You certainly don't. If you do not have spiritual powers as this recent incident has proven, could you please stop presenting yourself as a prophet?

Could you please stop deceiving people with your so called prophetic claims? “Man of God' where was your faith healing sting when your building collapsed on September 12?

If you have any real healing powers why have you not healed the wounded right there in your church? Why didn't you resurrect the dead? If you do not have any healing powers as this incident has proved beyond reasonable doubt, is it not high time you are held accountable and get prosecuted just like any other fake healer or doctor? The ruins of your church building will ever remain a testament of your fakery and deceit, a confirmation of your sham bogus powers.

Like his building, prophet TB Joshua is a 'structure' waiting to collapse, in fact Joshua's ministry has starting collapsing.. Like his church building, Joshua's ministry is founded on a flimsy and fraudulent foundation that cannot withstand the pressure of test and the weight of evidence. But we do not need this scale of tragedy to wake Africans up and put this impostor out of business.

I just wish that many of those who lost their lives had listened to the voice of reason and stayed away from the rickety wobbling evangelical enterprise called the Synagogue in Lagos, Nigeria. I wish the dead had ignored the tele evangelical theatric of TB Joshua on his Immanuel TV and stayed back in their countries and communities. They would have been alive today. Gullibility sucks. In fact gullibility kills particularly at the Synagogue in Lagos.

People can be gullible onto death. And those who are gullible should not suffer collapse and death alone, the ministry of those who feed on this destructive virus should suffer the same fate too. So, T B Joshua's Synagogue and its Satellite affiliate, the Immanuel TV, it is now your turn to collapse and die.

Leo Igwe is a skeptic from Nigeria