Kalabalge II: My People Perish For Lack Of Security And The Right To Bear Arms 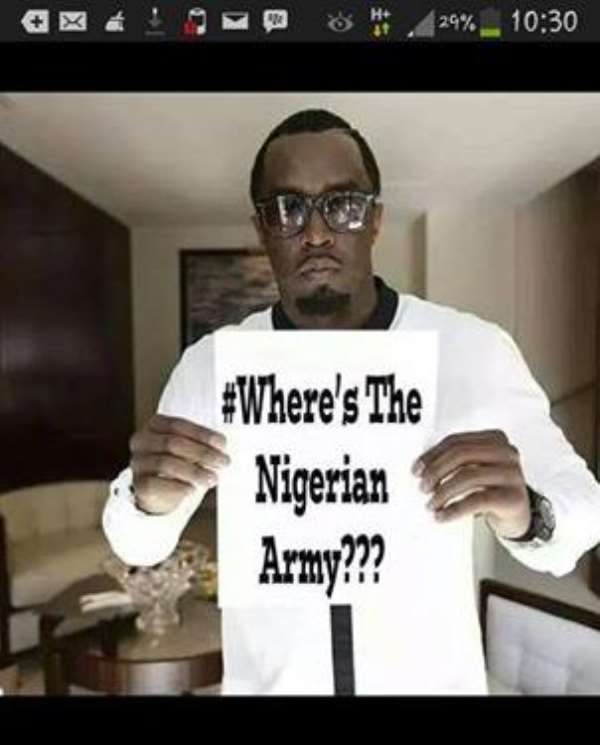 Then said he unto them, But now, he that hath a purse, let him take it, and likewise his scrip: and he that hath no sword, let him sell his garment, and buy one. (Luke 22: 36, KJV)

In today's world, a sword is a gun. And our people perish in Borno, for the lack of it; not because Nigerians and Nigeria's friends all over the world are not waiting anxiously to contribute to supplying them adequate guns; not because they are not willing to buy it from their purse, or money belt or sell their clothes to buy it, but because the Borno state government and federal government will not allow them. And so, it is; Boko Haram, the bad people who freely acquire not just guns, but top quality Nigerian military armored tanks and APC's, flow in every day, every blessed day and slaughter the farmers of Nigeria, abducting their children, both male and female and burning down their markets and homes.

It is a sad weekend. The brave people of Kala-Balge who heroically fought off over 400 Boko Haram terrorists earlier this month, killing hundreds in a communal effort and capturing over 50; were this weekend decimated in the much expected Boko Haram retaliation. Though this revenge was legibly anticipated, there was no military to defend them. The people of Kala-Balge were expecting the Boko revenge and they waged a brave battle, but according to the report, over 500 Boko Haram terrorists came this time, well armed and prepared to avenge their earlier defeat in the hands of the brave local warriors.

The question to ask the governor of Borno and the president of Nigeria along with his security chiefs is: how can terrorists in Nigerian territory drive in convoys of over 20 hilux trucks, with APC's and light weight tanks, and fight against resistance for hours then continue to pilfer and engage in their campaigns of incendiarism, all taking several hours and then drive comfortably back to their 'hide-outs,' without Nigeria's air force and army being scrambled to defend the people and at least counter them on their retreat? Do we have an army? When will Jonathan's 'total war' begin? We have waited for four years. First he admitted in Namibia that he was using kid gloves to deal with Boko Haram all along and that he would up it a little notch. We begged for the Tyson gloves. Civilians asked for the right and support to bear arms so we can engage and rat out the terrorists with the Tyson gloves needed; but the government ignored our pleas, not giving us the right to defend ourselves and not stepping up the war on their part. This democracy day, Nigeria's president said he will advance to total war. Thank God. The abduction of 200+ girls and the international attention has yielded some useful results in a crisis that has consumed up to 80,000 lives and displaced over 3 million. But when will we see this total war?

It is with heavy hearts that we empathize with and condone the people of Kala-Balge who did their best but lost to a superiorly armed - thanks to government facilitation and enhancement - group of blood thirsty hoodlums.

Though we pushed for the State of Emergency at a time when we believed in the patriotism of the army and the intention of the service chiefs and government at its helm; today the people of Borno and Nigeria as a whole say - you can call off your state of emergency and take your army out. It can well be debated that the army has now begun to do more harm than good. Where do Boko Haram get their guns? From the Nigerian army when they easily overrun their barracks'. Where do Boko Haram get their APC's and light Cobra tanks from? Again it is from the Nigerian army. So the army presence is actually invariably sustaining a steady supply of dangerous weaponry to Boko Haram; and the army never bombs these terrorists and their tanks form the air or land, so what is overall advantage of the army presence in the north east? Farmer genocide facilitatory and supervisory? But let us people bear arms and Boko Haram 'were not born well enough,' to dispossess us of our arms. Nigerian vigilante's and patriotic Nigerian youth from across the nation have pleaded for the government to allow us defend ourselves and engage these useless, fraidy cat's, fire for fire, once and for all. The Nigerian government can return that quarter of the budget designated for the so-called war against Boko Haram. Simply give us the right o bear arms - sophisticated arms as Boko Haram and Tompolo have.

The government continuously denying to authorize our right to bear arms to defend ourselves is a serious crime against humanity; and God be true, God is always true, one day we will require it of those who left us the people in direct harm's way of terror they sponsor and allow, protecting 'each-other's heads from rolling,' that they refuse to defend us from and refuse to permit us to bear the appropriate arms to defend ourselves of. By God, one day we will get our justice for this government supervised genocide of the poor farmers of Nigeria. The government fails to defend us and ties our hands behind our backs to be slaughtered by terror they sponsor. By God, we will get our day of justice, for God is a just God.

Dr. Peregrino Brimah for http://ENDS.ng [Every Nigerian Do Something]

Come Out In Your Numbers And Vote Massively For NPP – Akufo-...
10 minutes ago