List Of American State And Local Politicians Convicted Of Crimes Whilst In Office In Just 4 Years, 2010 To 2014!!!

Can Ghana Learn Something From This List? Can This List Inform The Raging Debate About Political Corruption In Ghana? The Defining Issue Of Our Time
By Hector O. Boham 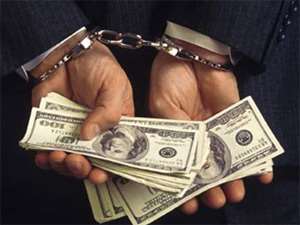 The writer believes that whereas the list shows that political corruption is not the peculiar preserve of Ghana and Africa, the no-nonsense and zero tolerance approach with which countries like the US deal with these corrupt politicians is the way to go. We must find a way at all cost to get this right for the sake of posterity.

This issue is crucial for Africa's development and prosperity. If other nations have found a way to control these politicians, it surely must not be without the realms of possibilities.

The list below (reproduced from Wikipedia), runs the gamut from governors, secretaries,comptrollers, state senators and state representatives, their close staff and appointees – the same people we are finger-pointing in Ghana. Private citizens, businessmen and family are included only as they relate to the crime. In Ghana, it is no different – Woyome is a classic example.

This list comprises 21 Republicans and 47 Democrats for a total of 68 politicians. The crimes are no different from what we have been crying about in Ghana and the criminals are from the two major political parties, just as we have two major political parties in Ghana. So what are we waiting for? Let us stop the lip-service and go to work – and fight to leave Ghanaian generations yet unborn some hope of a better future.

• State Senator Roy Ashburn (R) of Bakersfield was arrested on two counts of driving under the influence of alcohol. He was sentenced to two days in jail and three years probation. (2010)

• State Representative Douglas Bruce (R), was convicted on four counts of felony criminal activity including, money laundering, attempted improper influence of a public official, and tax fraud. He was sentenced on February 13, 2012 to a total of 180 days in jail, $49,000 in fines, and six months of probation which included extensive disclosure requirements. (2011)

• Mayor of Hartford, Connecticut Eddie Perez (D), was sentenced to eight years, suspended after three years, with three years in prison, to be followed by three years of probation for corruption. (2010)

• House Speaker Christopher G. Donovan's (D) Campaign Manager Joshua Nassi was arrested and Finance Director Robert Braddock, Jr. was sentenced to three years in an FBI investigation into campaign finance corruption. "You couldn't force me to work in politics ever again," Braddock said. Donovan has not been charged. (2012)

• Chairman of the Republican Party of Florida, Jim Greer was sentenced to 18 months in prison plus one year of probation after pleading guilty to four counts of theft and one count of money laundering, admitting he stole some $200,000 of party donations. (2013)

• State Senator John McGee (R) was arrested on June 19, 2011 for grand theft auto and driving under the influence. At the time of arrest his blood alcohol content was reported at a .15, compared to the legal limit in the state of .08. (2011) On July 1, 2011, McGee pled guilty to misdemeanor DUI. The felony theft and felony operation of a vehicle without consent charges were dropped. The court sentenced McGee to 180 days in jail, with all but five days suspended. He also served three days community service and pay fines and restitution.

• Comptroller and Treasurer for Dixon Rita Crundwell (D) was arrested for fraud after allegedly embezzling as much as $30 million over many years. The money was used to support a lavish lifestyle and support her horse ranch, the Meri-J. (2013)

• Secretary of State Charlie White (R) was convicted of 6 of 7 felony charges including perjury, theft and voter fraud. (2012)

• LOCAL Mayor of East Chicago George Pabey (D) was convicted by a federal court jury on September 24, 2010 of conspiracy and theft of government funds. (2010)

• Prince George's County Executive Jack B. Johnson (D), On May 17, 2011, Johnson pleaded guilty to extortion and, witness and evidence tampering. (2011) On December 6, 2011, Johnson was sentenced to seven years and three months in Butner federal prison in North Carolina. He was also fined $100,000.

• Prince George's County Councillor Leslie Johnson (D), was sentenced to one year and one day in prison. (2011)

• State Representative Carlos Henriquez (D) was convicted of two counts assault and battery charges and sentenced to 2.5 years, with six months to be served in the Billerica County House of Correction and the remaining two years to be spent on probation. (2014)

• State Representative Stephen Stat Smith (D) pled guilty to two misdemeanor counts of deprivation of rights under color of law for his role in a voter fraud scheme. (2012)

• Speaker of the House Salvatore DiMasi (D) was found guilty of using his position to secure multimillion-dollar state contracts for Cognos, a business intelligence software company, in exchange for kickbacks.[ (2011)

• State Senator Anthony Gallucio (D) was given one year in prison after failing a sobriety test and violating his probation from a previous hit and run accident. (2010)

• Justice of the Michigan Supreme Court Diane Hathaway (D) was sentenced to 366 days in Prison for criminal mortgage fraud. (2013)

• Judge Bobby DeLaughter (D) was made famous for finally convicting Byron De La Beckwith in 1994 for the murder of civil rights leader Medgar Evers in 1963. DeLaughter pled guilty of one count of lying to the FBI and was sentenced to 18 months in prison. (2010)

• State Assemblyman and Mayor of Perth Amboy, New Jersey Joseph Vas (D) sentenced to 6 and a half years for federal corruption. (2011)

• State Representative Gary Wheaton (R) resigned from the legislature after being arrested for speeding and driving on a suspended license, his second traffic arrest. Wheaton pleaded guilty to recklessly endangering the lives and safety of the public.

• State Senator Shirley Huntley (D) convicted of mail fraud. She was sentenced to one year and a day in prison.(2013)

• New York State Comptroller Alan Hevesi (D), was convicted on charges surrounding a "pay to play" scheme regarding the New York State Pension Fund, and was sentenced to 1–4 years. (2011)

• State Senator Kevin Parker (D), Parker was convicted of a misdemeanor charge, criminal mischief, and on March 21, 2011 was sentenced to three years probation and a $1,000 fine for attacking a New York Post photographer and damaging the photographer's camera and car door.(2011)

• President of the New York City council Andrew Stein (D) was convicted of tax evasion regarding a Ponzi scheme in November 2010.

• State Representative Stephen LaRoque (R), an outspoken Republican from Kinston, was supposed to redirect loan monies from the U.S. Department of Agriculture to small business owners in rural areas with limited access to capital, instead he took $300,000 for himself. He was convicted on 12 counts including theft, money laundering and filing false tax returns. (2013)

• President pro tempore of the Oklahoma Senate Mike Morgan (D) as found guilty of accepting $12,000 in bribes in 2007

• State Representative Randy Terrill (R) was found guilty of bribery in connection with the 2010 Oklahoma political corruption investigation concerning the Office of the Oklahoma Chief Medical Examiner in which he bribed State Senator Debbie Leftwich (D) to give up her seat so State Representative Mike Christian (R) could run for it instead. Terrill was sentenced to one year in prison. Christian and Leftwich were not charged.(2013)

• State Representative and Democratic Minority Whip of the Pennsylvania House of Representatives Bill DeWeese (D) sentenced to 30 to 60 months in state prison for theft. (2012)

• State Senator and Republican Majority Whip of the Pennsylvania Senate, Jane Orie (R) was convicted in March 2012, of 14 counts of forgery, conflict of interest and theft of services, which included five felonies. (2012)

• State Representative John M. Perzel (R), pleaded guilty to eight criminal charges, including two counts of conflict of interest, two counts of theft, and four counts of conspiracy, concerning a scheme to spend millions of taxpayer dollars on computer technology from Aristotle, Inc. for the benefit of Republican political campaigns. (2011)

• State Representative Brett Feese (R) sentenced to 4 to 12 years in state prison, an additional 2 years of probation, a $25,000 fine, and $1 million in restitution for his role in the Computergate state government corruption scandal

• LOCAL: Luzerne County Board of Commissioner Greg Skrepenak, (D), was sentenced to 24 months in federal prison for corruption. (2010)

• Lieutenant Governor Ken Ard (R) resigned his position and pled guilty to 7 counts of mis-use of campaign funds. He was sentenced to five years probation, fined $5,000 and required to work 300 hours of community service. (2011)

• State Representative Kristopher Crawford (R) was convicted by a jury of four misdemeanor counts of failure to file his taxes. (2012) fined $10,000.

• State Representative Lisa D. Smith (R) pleaded guilty to one count of mail fraud and one count of failure to pay employee taxes. She was sentenced to two years in prison, three years of probation and fined $1,000,000.

The Author Is The Co-Founder And President Of CORRUPTION AND FRAUD AUDIT CONSORTIUM (CAFAC) GHANA LIMITED. You Can Reach Him At [email protected]

Betting is hurting our game, players and team officials are ...
19 minutes ago