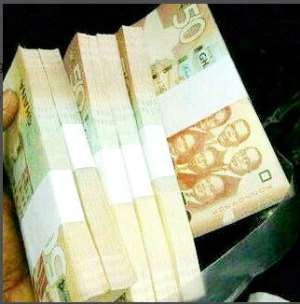 It looks as if we have been here before. Haven't we? How long has it been when we had to shout on top of our voices that we were poor and that we could not pay our debts and that our creditors should give us some bail out from our indebtedness to them? That was when we went on a HIPC initiative which gave us some respite to start again on a clean state.

However how pathetic the whole deal about a country: blessed with all the human and natural resources- going on such an initiative , our leaders made us believe that it was such a good deal for us at the time. And in indeed it was a good deal. We had some KVIPs dotted around the country to show for it.

Then I thought we will be wiser to take advantage of the so –called respite the HIPC initiative had blessed us with to do all that was necessary to grow our economy to be self-reliant. But our leaders failed us again. Our leaders led us to do the same things that had earlier brought us to our pre-HIPC state. All these while they told us we were doing so well; that we had achieved some middle income status.

All that the Middle Income Status meant was some smart foreign financial institutions thought we have discovered oil in commercial quantity that we as a country could afford more loans coming from them. It did not matter whether the Ghanaian economic situation was worsening by day. Our leaders went for the bait. Our debts began to rise until we found ourselves here where it is suggested that currently we are financing our debts with almost sixty percent of our GDP.

Now, once again we have come to that helpless state that we had found ourselves fourteen years ago. Amidst our despair, our leaders are calling for all manner of economic forums just to discuss the things we already know are the causes and solutions to our present predicament. A hazard guess of the causes of our present economic difficulties are our insatiable taste for foreign goods resulting in the collapse of indigenous industries ,lack of support for local industries, the lack of clear cut development plan for the nation and public corruption etc etc.

The solutions that had been proposed are that we should grow what we eat, demand our government support the local industries, export added value products, reduce wastage in public expenditure and reduce corruption; just to mention a few. These are well known by our leaders. But they always suffer the inertia in putting all these into practice to get us out of our perennial difficult economic circumstances.

It just looks as if Ghana can only talk of its great leaders only in the past. We desire to have such leaders as we found in Osagyefo Dr. Kwame Nkrumah and Col Kutu Achempong. These were leaders who believe that in restoring the dignity of the Ghanaian, he must be led to depend on himself. Our today's leaders are either selfish, short sighted or lack the courage to take the decisions which will benefit us all in the long run.

Mostly, their actions are dictated by the next elections. They would rather go globetrotting to mortgage the future of the Ghanaian under very difficult conditions to prosecute their parochial manifestos just to win the next elections instead of leading the people to grow the economy of Ghana with hard work. Ghana deserves better.

But it is not only the political leaders that have failed us. The intelligentsias found in the so called think thanks have failed us. I just cannot believe that one singular issue as the Economic Partnership Agreement which in its coming into force could jeopardize our collective will to be economically independent and self –reliant wasn't made the most topical issue in the past election. That even with such a treat to our economy in the case that our leaders sign onto this deal, we either decided that the issue then was not of importance or we were oblivious of the threat. And so we missed the opportunity to seek the views of those who want to lead us on what they think about the agreement. Surprisingly, all our focus was on whether to have or not to have a free SHS; as if that holds the magic wand to our collective will.

We just can't go on with these rituals of changing governments in elections only to be saddled with leaders who will act as usual. Were we not here when politicians were asking us to praise them to the highest heavens because they had implemented a salary scheme that puts money into workers' pocket only to turn round now to plead with us that we should agree with its suspension because the economy could not contain the rising wage bill? Does this not mean that those who took decision on our behalf did not assess the cost implication of this scheme to this economy before implementing the scheme? In a serious organization, these leaders would have been called to explain why they have to keep their jobs after leading the organization to make such expenses without any due diligence.

It is in difficult times that a society taps into the ingenuity of its citizens to overcome seemingly insurmountable challenges. The Ghanaian is ready to make the sacrifice for his nation if only leaders will show the way. This is why we will plead with our leaders to look inward for the solution to our present predicament than outward. In fact, it is the fact that we have religiously implemented programmes prescribed by our so-called foreign partners that has brought us to our beggarly state. I just hope those who take decisions for us this day will find space in the list when we count our leaders.