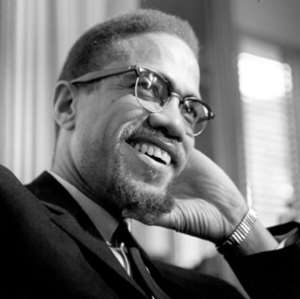 In March of 1964, Malcolm X announced his official departure from the Nation of Islam where he had spent twelve years working on behalf of the organization led by Elijah Muhammad. Malcolm had been suspended and silenced for ninety days in the aftermath of an address he delivered at the Manhattan Center on December 1, 1963 entitled “God's Judgment of White America.”

This rally organized by the NOI was planned well in advance of the assassination of President John F. Kennedy on November 22 in Dallas, Texas. Elijah Muhammad had ordered all of his ministers not to speak directly about the assassination since the country was still in a state of shock and mourning.

During the question and answer period of the meeting Malcolm X was asked about his response to the assassination and subsequently noted that the United States government and its leaders had engaged in targeted assassinations of foreign leaders. He specifically pointed to the murder of Congolese Prime Minister Patrice Lumumba in which the U.S. played a prominent role in the destabilization of his government in 1960 as well as his kidnapping, torture and execution in mid-January of 1961.

Within the course of his response he said the assassination was a “case of the chickens coming home to roost,” a common phrase within the African American community suggesting that horrendous deeds committed against others will come back to haunt the perpetrators. At the conclusion of the ninety day suspension and silencing, word was sent from the national headquarters of the NOI in Chicago that the punishment for ostensibly violating the discipline of the leader would be extended indefinitely.

Consequently, Malcolm X called a press conference where he announced not only his departure from the NOI but the establishment of another organization, the Muslim Mosque Inc., a religious group that would also involve itself in electoral politics and community organizing.

For several years before his split with Elijah Muhammad and the NOI, Malcolm X had sought to build alliances between African Americans, Africans from the continent along, with Muslim nations and communities outside the U.S.

At his “Message to the Grassroots” speech in Detroit on November 10, 1963, just three weeks prior to his suspension from the NOI, he would say that genuine independence struggles were bloody and that the people of Algeria, Kenya, China and other countries only gained their independence and sovereignty because they were willing to engage in an armed struggle. (Recording by the Afro-American Broadcasting Corporation in Detroit)

Malcolm X would return to Detroit in April 1964 to deliver his legendary “Ballot or Bullets” speech. “It's freedom for everybody or freedom for nobody,” Malcolm X declared. He said that if African Americans were willing to go and fight on behalf of U.S. imperialism against armed revolutionaries in Vietnam and Korea then there should no problem with them taking up guns to defend themselves against the Ku Klux Klan and other racists inside this country.

Travels to the OAU Summit, the African Continent and the Middle East

Later in May 1964 Malcolm X embarked upon the hajj, the religious pilgrimage that all Muslims strive for in their lifetimes. Under the NOI, the hajj was not mandatory and therefore the organization lacked what was perceived as authenticity within the Islamic communities in the East.

After making his religious pilgrimage he added to his existing Muslim name of Malik Shabazz, El-Hajj, stressing his acceptance within the orthodox Muslim faith. During this same trip, Malcolm would also travel to several African states including Egypt, Nigeria and Ghana.

He would return to the U.S. in June and found a new political group, the Organization of Afro-American Unity (OAAU), patterned on the Organization of African Unity (OAU), the continental organization of independent states formed the year before in Addis Ababa, Ethiopia. Malcolm set out for the Second Annual Summit of the OAU being held in Cairo, Egypt in July 1964 to make a direct appeal to African leaders for solidarity and support in resolving the plight of African Americans under U.S. national oppression.

In an eight-page memorandum to the African heads-of-state in Cairo, Malcolm X, writing on behalf of the OAAU, said that “Our problem is your problem. No matter how much independence Africans get here on the mother continent, unless you wear your national dress at all times when you visit America, you may be mistaken for one of us and suffer the same psychological and physical mutilation that is an everyday occurrence in our lives.”

Lessons From the Legacy of Malcolm X
Malcolm X on his second visit to Africa and the Middle East in 1964 would stay outside the country for four months until November. He would stop over in France and England on his way back to the U.S. in order to enhance relations between African Americans and the African Diaspora in Western Europe.

After returning to the U.S., his speeches during rallies for the OAAU, often held at the Audubon Ballroom in Harlem, he would share platforms with members of the Pan-African Students Organization of the Americas (PASOA) and other African leaders such as Tanzanian revolutionary Abdul Rahman Mohamed Babu, a Marxist and a Pan-Africanist who advocated socialism as the only solution for the continent.

He would meet with Che Guevara during his visit to the United Nations in December 1964. Che sent a statement of solidarity to an OAAU meeting that was read by Malcolm X.

Later in February 1965 on the eve of his assassination, Malcolm attempted to enter France again but was denied entry by the government. The French government would not provide a specific answer as to why he was being denied admission.

After returning to the U.S. and a brief stopover in Britain, Malcolm's home was bombed during the early morning hours of February 14. He would travel to Detroit and deliver another speech which encompassed themes of Pan-Africanism and Internationalism.

Malcolm X was assassinated on February 21 before addressing an audience of the OAAU at the Audubon Ballroom. Although his assassination has been attributed to members of the NOI, many have believed since 1965 that the federal government was behind his death due to his uncompromising militancy and his political evolution towards Revolutionary Pan-Africanism and Internationalism.

In addition to seeking the assistance of the African governments and national liberation movements in the struggle of African Americans, Malcolm X, like William Patterson, Paul Robeson and W.E.B. Du Bois of the Civil Rights Congress (CRC) in 1951, sought to take the plight of African Americans before the United Nations seeking sanctions against the U.S. for crimes against humanity. He also said that through his travels he keenly observed that countries which were making the most progress were moving towards socialism and the liberation of women.

These words hold true today. The African and Middle Eastern communities in Europe have also exploded in urban rebellions in the same fashion as they developed inside the U.S. after 1963.

Until the system of international racism and economic exploitation is confronted by oppressed peoples collectively on a global level there will not be a solution to the crisis. Youth today must study the works of Malcolm X and apply the lessons of his life and struggles to the monumental challenges facing the workers and oppressed in the 21st century.

Tight security at courts over possible terrorist attack
25 minutes ago

‘We don’t have anything here for Sir John’ – Lands Commissio...
25 minutes ago