Iran Will Become A Nuclear Power, Unless… 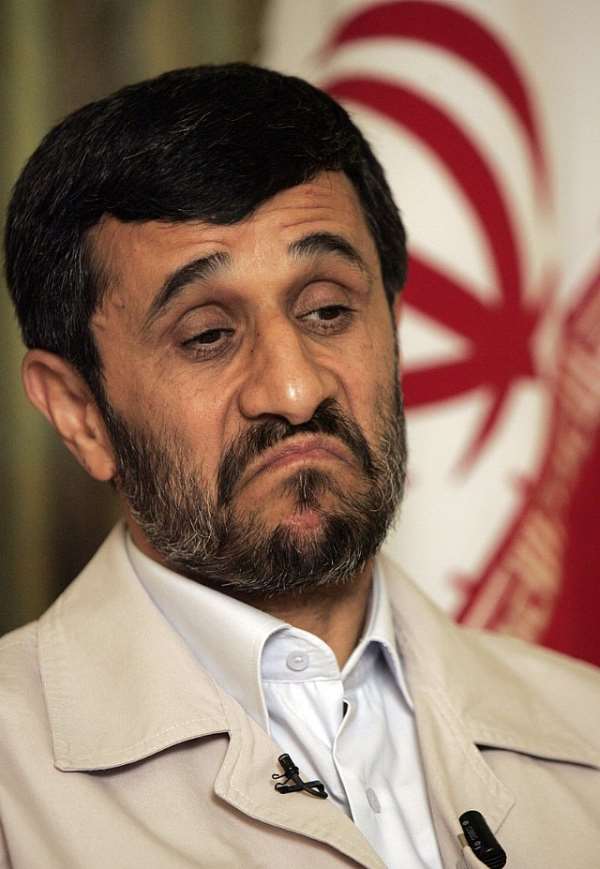 In my last article I surveyed as impartially as I could the position of the various countries that might be affected by the interim deal recently forged between Iran and the P5+1 (the US, Russia, China, Britain, France and Germany). In this article I venture to explain why I believe that Iran will not give up its goal to acquire nuclear weapons and what is behind its determination to try to render even a permanent agreement, if ever achieved, transient at best. Finally, I raise the question as to whether or not there is a way to peacefully prevent Iran from becoming a nuclear state.

It should be noted at the onset that Iran's suffering from the intense sanctions that nearly crippled its economy was the prime, if not the only, reason that brought it to the negotiating table. This was, however, no more than a tactical move, a sort of strategic retreat from the 'battlefield' to get some relief, only to regroup and go back on the offensive from a better strategic position in order to achieve its intended objective.

There are four different dimensions to Iran's relentless drive to acquire nuclear weapons:

National pride: Iran's vision of its regional and international role, its self-assumed Islamic mission to promulgate its own vision of Islam, and its national pride preclude any agreement that can prevent it from becoming a nuclear power.

Iran is a proud nation with an enduring history that spans over four millennia, and throughout much of its history it has projected power and influence in the region and beyond. It has the second-largest oil reserves in the region, and is located in one of the world's most strategic regions, enjoying effective dominance over the Strait of Hormuz through which nearly 40% of the world's oil passes.

The Iranian people are highly invested and infused with national pride and feel they deserve to be treated with respect. They view the possession of nuclear weapons as the main strategic tool that would accord them that respect, particularly following (as they see it) decades of exploitation and humiliation by Western powers.

From the Iranian perspective, the Gulf's overwhelming Shiite majority combined with a long history of cultural and material riches grants Iran the inherent right to become the regional hegemon.

This also explains Iran's determination to continue to wage a proxy war in Syria in support of Assad's Alawite regime (an offshoot of Shiism) against a plethora of Sunni factions and states led by Saudi Arabia in order to secure its influence during and after Assad's reign.

Moreover, Iran's consistent and successful effort to extend its influence over the crescent from the Gulf to the Mediterranean, which includes Iraq, Syria and Lebanon, adds huge strategic advantages to its regional outreach.

A nuclear-armed Iran will not only solidify its regional hegemony and ascendancy over the Sunni Arab states but recapture its historic importance, which was largely lost during the post-World War era and subsequent American dominance. Moreover, a nuclear Iran will allow it to intimidate its Sunni Arab neighbors and subordinate their political agenda to its own while neutralizing the nuclear threat of its archenemy Israel.

National Identity: What has further deepened Iran's convictions to acquire nuclear weapons is its newly-born national identity as the Islamic Republic of Iran. Although Iran (Persia) has had a long history with a recognized national identity, it has not been ruled before by an Islamic clergy. As such, Iran's national identity remains vulnerable because it is still in its formative stages and on the defensive as it has not, as yet, struck deep roots in a population with a considerable Western orientation.

The clergy's intransigence, be it aggressive (Ahmadinejad) or smiling (Rouhani) reflects the protective cover for a consolidating national identity, and thus at heart a psychologically-based resistance to external pressure. Under these conditions, the nature of the discord between them and the US will carry an “us versus them” turn in a prejudiced and selective way.

For the Ayatollahs, the acquisition of nuclear weapons under the aegis of an Islamic Shiite regime would solidify, strengthen and allay the still-vulnerable national identity through direct association with the awesome power and prestige of having nuclear weapons.

Even though the Ayatollahs have insisted that their nuclear program is peaceful, they have made it a common cause as an integral component of national identity and have successfully mobilized the public to stand united behind the regime and defy Western powers, especially the US.

Resistance to change: The push for obtaining nuclear weapons is the clergy's means by which it resists regime change. The Ayatollahs are convinced that Western powers, led by the US, are committed to regime change in Iran. They are terrified of that prospect because the very existence of Iran as an Islamic Republic is embedded in the longevity of current and successive regimes.

Iranians still recall with trepidation and venom the ouster of the Mosaddeq regime in 1953 by the CIA and are now determined not to allow a replay of such national humiliation by pursuing political and military strategies with nuclear weapons at its core. Therefore, Iran's psychological resistance to change is directly related to its political mindset toward the US, which feeds into its perceptions that the US' intention has and continues to be regime change.

In fact, if there was anything that trumps the powerful drive to acquire nuclear weapons it is retaining power, which is the heart and soul of the 1979 revolution. Iran has borrowed a page or two from the experiences of North Korea and Pakistan and is fully cognizant that once it reaches the breakout point, it will immunize itself from being attacked by the US and/or Israel.

Why then, in light of Iran's long history of deception and defiance of six UN resolutions between 2006 and 2010 to halt its uranium enrichment program, has the interim agreement allowed Iran to have its nuclear infrastructure and uranium enrichment abilities left almost intact?

Tehran has secured its principle demand to enrich uranium and received badly-needed partial relief from the sanctions. It has opposed dismantling even a single centrifuge (which was agreed upon) and agreed merely to freeze its heavy water plants to produce plutonium, which is easily reversible. Although Iran agreed to roll back its stockpile of nearly 500 pounds of uranium enriched to 20% by degrading half to 5% and converting the rest to oxide, this process can also be overturned at will.

Iran's acceptance of what Secretary of State John Kerry characterized in Geneva on November 24 as “unprecedented international monitoring” may end up only with “managed access.” Iran has yet to accept unannounced inspections of their most sensitive underground plants at Fordo and the Parchin Military Complex, where Iran is suspected to have experimented with nuclear devices.

Given Iran's determination to acquire nuclear weapons, the interim agreement does not hold much hope that a final agreement will prevent Iran from reaching the nuclear threshold. To prevent Iran by diplomatic means from becoming a nuclear power and avoid the need to resort to the military option or end up with Iran in possession of nuclear weapons, the following measures can, at a minimum, improve the odds if carefully considered.

First is dismantling much of Iran's nuclear facilities designed for the development of nuclear weapons. I could not elaborate on this critical requirement any better than former Secretaries of States Henry Kissinger and George Shultz, who stated in their column in the Wall Street Journal on December 2nd:

“If the six month “freeze” period secured in Geneva is to be something other than a tactical pause on Iran's march toward a military nuclear capability, Iran's technical ability to construct a nuclear weapon must be meaningfully curtailed in the next stipulated negotiation through a strategically significant reduction in the number of centrifuges, restrictions on its installation of advanced centrifuges, and a foreclosure of its route toward a plutonium-production capability.”

Second, the Obama administration must make it unambiguously clear to the Iranian authorities (preferably in private to spare Iran's pride) that the US will not hesitate for a moment to re-impose the most crippling sanctions, with the overwhelming support of Congress, should Iran be caught cheating. Moreover, the Mullahs must believe that the US is prepared to resort to the military option to stop Iran's drive to become a nuclear state by remaining militarily vigilant throughout the Gulf. In addition, the US's support of the union of Gulf States, with centralized defense and military capabilities, could create another layer of deterrence against Iran's ambition to become the region's superpower.

Third, the US must warn Iranian officials that to prevent any miscalculations, they ought to cease and desist threatening the very existence of another UN member state and an ally – Israel. Tehran must understand that Israel will take such threats far more seriously should Iran reach the breakout point. The Obama administration must forcefully reject such threats in the future and warn Iran that the US cannot prevent Israel from taking any military action if it deems that its national security is in jeopardy.

Fourth, the Obama administration needs to insist that any lasting agreement must also ensure that Iran moderate its approach to the Israeli-Palestinian conflict and end its military support of radical Islamists such as Hamas and Hezbollah, and other various terrorist groups which promote its political agenda. If Iran wishes to be a respected member of the international community it can no longer have it both ways; as such, a requirement must be integral to any new agreement.

Fifth, to allay Iran's most alarming concerns, the Obama administration needs to assure the Iranians that the US does not seek regime change in Tehran, now or in the future. By virtue of its history, riches, culture and strategic importance, Iran will be accorded the respect it seeks and can play a significant and positive role on the international stage, from which it can greatly benefit without the possession of nuclear weapons.

Iran has a perfect face-saving way out because it has never admitted that it was seeking nuclear weapons and that its nuclear program was and still is for civilian purposes. Moreover, since the Iranian mindset is built around national pride, the US should not characterize any new agreement in terms of “winners and losers” but rather as a mutually interest-based agreement from which all sides emerge as winners.

I am not naïve to think that my “prescription” to end the nuclear impasse with Iran is simple and can be implemented with only American resolve. The religious belief of the clergy in Iran, their worldview and their place in it may blind them from seeing the light. Their religious convictions require no evidence, and as a result they may well continue the treacherous nuclear path to their own detriment.

But then again, if the Obama administration feels that there is even a faint chance to reach a lasting agreement with Iran, President Obama can improve the odds by insisting on the above conditions and satisfy itself and its allies that it has done all it could to prevent the military option.

Given Iran's self-destructive instincts, however, and Obama's perceived lack of credibility, especially in the wake of the Syrian debacle, there is plenty of room left for errors and miscalculations.

This may end up forcing the president to choose between the lesser of two evils: strike Iran's nuclear installations or settle for containment. Either option bears potentially dire consequences for the United States, its regional allies, and Iran itself.

Dr. Alon Ben-Meir is a professor of international relations at the Center for Global Affairs at NYU. He teaches courses on international negotiation and Middle Eastern studies.

Please feel free to share this article with your contacts.

TUTAG meets government; conditions of service negotiations b...
24 minutes ago