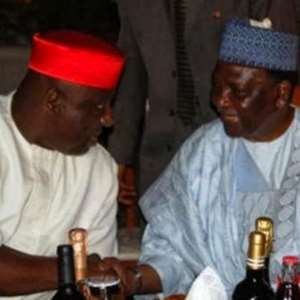 While the pogrom against the unarmed and defenseless Igbo civilians was going on all over Nigeria starting from July, 1966, when some vengeful and misguided northern army officers kidnaped and murdered the Head of State Aguiyi Ironsi, the heinous mayhem soon turned into some sort of proof of loyalty to the Nigerian state and a recreational sport for Nigerians. Soon, Nigeria's citizenship became authenticated by how many Igbo people you could prove to have killed.

Fear, jealousy, hatred and intolerance drove the Nigerian government and its citizens to start the massacre and ethnic cleansing of the Igbo and other ethnic peoples of what later became known as Biafra. After a while, when Nigerians thought they had sufficiently cornered and subdued their quarry and hapless victims, killing the Igbo became for Nigerian government officials a pass time and sport. Nigerian top officials spearheaded by the then Colonel Yakubu Gowon turned the killing of the Igbo people into a game. Between July, 1966 and May 30, 1967 over 100,000 Igbo and other ethnic peoples of the former Eastern Region were killed in this way by Nigerians.

In the history of modern Africa the genocide and pogrom by the Nigerian government and its people against Igbo people, within the period of 1966 and 1970, have not been surpassed. From 1966 to 1970 the government of Nigeria organized the killing of a section of the population of its citizens in the most gruesome manner. Nigeria ethnically and religiously cleansed the Nigerian state of the Igbo people then and sadly after four decades, Nigeria still indulges in this crime. In the end Nigeria killed a total of 3.1 million Igbo/Biafrans. Even the passage of 46 years has not removed from the mind of Nigerians the hatred, fear, intolerance and bigotry that started the country on this self-destructive journey. Rather than reduce, Nigeria's Islamic intolerance and terrorism against the Igbo and other ethnic nationalities of the former Eastern Region of Nigeria have increased and have now pushed the Nigerian state off the edge of an irreversible precipice.

Here we are talking about how Nigerian officials and people turned Igbo killing into a sport. On this occasion, at the airport in Lagos, Nigeria, there were some top Nigerian government officials and military officers. In the camaraderie and joie de vivre atmosphere that is usually present where young military officers are, the jokes soon turned to retelling their recent exploits of the killing of the Igbo civilians. Each struggled to tell and demonstrate who had personally killed the most Igbo.

Before the crisis began Gowon's girlfriend Edith Ike was Igbo and his fellow officers knew about it. Though Gowon had severed relationship with Edith when the hatred and killing of her ethnic people by both the Nigerian armed forces and civilians started but some of his colleagues still doubted his allegiance to Nigeria. It was this doubt of allegiance that led to the airport incident on this particular day in 1966.

Muhammadu Shuwa who would later play a pivotal role in the genocidal Biafra war was in the airport with other army officers on that day. While the argument went on Shuwa came up with what he thought was a simple and brilliant idea to settle once and for all, the contention of who killed the most Igbo among them. Shuwa gave Gowon a service pistol and said to him that he should cut the long story short and rest the minds of those who still doubted Gowon's commitment by killing an Igbo pilot who had just flown a commercial plane to the airport.

Of course Gowon remained in power throughout the war. He proved himself that afternoon. The Igbo pilot was taken to the tarmac and, in the clear view of all present Gowon shot and killed him. Muhammadu Shuwa would also prove himself several times over during the Biafra war. As one of Nigeria's brigade commanders, he became notorious and was directly responsible for the killing of millions of Igbo and other Biafrans in what is clearly a war of genocide and crime against humanity. The irony of it is that forty-six years after the airport incident, Shuwa was shot and killed in 2012 in his house in Northern Nigeria by some assailants who were identified as members of the Boko Haram Islamic terrorist group.

Today, the same Yakubu Gowon, the killer of the Igbo pilot on the airport tarmac, organizes a religious group which he calls “Nigeria Prays.” It is this kind of hypocritical life of absurdity and distortion by Nigerian people and their leaders that has caused many critics to ask if Nigerians have any idea of what consists of morality or what it means to operate a decent and respectable human social society. Over the years, Gowon has visited some parts of Igbo land and actually stood before some Igbo people to pray. He prays, not for the forgiveness of the crime against humanity that he committed against the Igbo but for God to intervene and fix Nigeria that has gone awry because it is awash in the blood of 3.1 million Igbo and other Biafrans whom Gowon presided over their genocidal murder. Recently, a picture of the governor of Imo State Rochas Okorocha and Gowon in a celebrating mood went viral on the internet. In the picture the two men sat at a table lined with bottles of wine and they seemed to be having a good time. For the Igbo and other Biafran victims of the Biafra genocide the picture was regarded in a very bad taste as they found it very disgusting and insulting. Those who decry this insensitive display of lack of discretion and a sense of history on the Governor's side have repeatedly asked if Okorocha, an Igbo leader, is celebrating the genocidal murder of his brothers, sisters, fathers, mothers, uncles, aunts and cousins with their unrepentant chief murderer. Amongst many people across the world it is believed that one important code or principle that is supposed to guide the conduct of leaders of any people is to be constantly conscious of the feelings and aspirations of the people they are leading. It is the consensus of all Igbo and other Biafrans who now say that by all assessment, Governor Okorocha failed this test by this singular act.

And those who criticize Gowon's charade and mockery of piety have not ceased to ask if God has decided to redefine the universal meaning of equity and justice for the sake of Gowon and other “pious” Nigerians like him. But the last time we checked, a significant part of humanity still believes in the legal standard which states that whoever that must invoke equity must come with clean hands. By killing 3.1 million Biafran babies, children, women and men, and the Igbo pilot, Gowon ranks among the top ten of the world's greatest murderers of all time. Other two pathetic historical figures who also made the list are Hitler and Stalin.

Gowon's “Nigeria Prays” is a typical depiction of what Nigeria stands for. Nigeria like Yakubu Gowon's praying organization is the quintessential distorted society where truth, justice and everything sensible and logical stand on their head. Or how else does anyone explain how a man with so much blood in his hand, unrepentant and unremorseful, feels when he traverses in “holy piety” the same lands where some of the unburied millions who still lay in their open graves that he Gowon personally murdered. Yes, it is only in Nigeria that such mockery of godliness is on permanent display, and the man and his diminutive listeners go about praying fervently for God's grace on the same land they impudently and ceaselessly pollute.

More trouble for Weija residents as more volumes yet to be s...
44 minutes ago