The Life Of An Unemployed Graduate 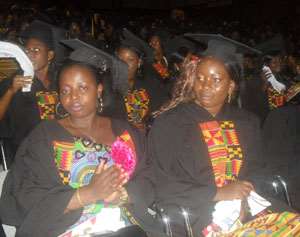 It is the dream of every graduating student be it from the polytechnic, the university or any other institution to be gainfully employed just after national service. Albeit, if wishes were horses beggars would ride. Soon after the gargantuan graduation highly represented by almost the entire extended family of the graduand, then comes the 'Jesus Christ' of most graduates 'the national service'. National services becomes the shield of most graduates protecting them from the hitherto stigma associated with being unemployed. At this very point there is an unending anxiety in the midst of respite.

The journey through national service appears to be a very long one from the beginning only to end sooner than anticipated to the disappointment of many, alas that is where the whole real life of an unemployed graduate begins. Imagine getting up in the morning with a 'zero to do list' for the whole day apart from sitting at one corner of your bed waiting for your breakfast from your parents if you are the lucky one or worse for you if you have to fall on your friends and other people for your feeding. Usually people would not make an issue out of still eating from your mothers' kitchen even at an old age, how about the seemingly lost of hope and respect not only from clueless people around you but family and friends?, that is the real deal about being unemployed.

Again, consider the wanton avoidance of people ordinarily you would like to be with because they would ask you umpteen times questions such as the following; Where are you now? Are you working now? How far with job search among several others as if jobs are secured in just about few minutes after national service. Obviously, people have not considered the slur these ostensible concerns cast on lives of the unemployed graduate, it's not surprising some unemployed graduates have subsequently not only shunned the social media but also social events with the hope of avoiding the preposterous reminder of their plight every now and then.

Interestingly, there are calls by all manner of people imploring on unemployed graduates not to rely on government for employment but to plunge into the world of self employment, forgetting about the very scarce but also important commodity called 'money' badly needed for such venture. In the sidelines of these, frustrated unemployed graduates attend anything dubbed 'seminar' on wealth creation spending the little resources left after earning meagre allowances from their national Jesus Christ service. Though not to downplay the effectiveness of these seminars, I sometimes wonder if it is all about attending seminars.

Finally comes the turn of recruitment agencies to cash in on frustrated unemployed graduates. If you are fortunate you are exploited on piecemeal bases, you pay ten to thirty cedis to attend interviews almost every two weeks on portfolios you may not even be qualified for .If you become the unlucky one too, you pay a lump sum of some two thousand cedis or even higher just to secure a job which may never come. That is the life of an unemployed graduate. As you glance through this article pray you find neither yourself nor others in this hot seat of being an unemployed graduate.