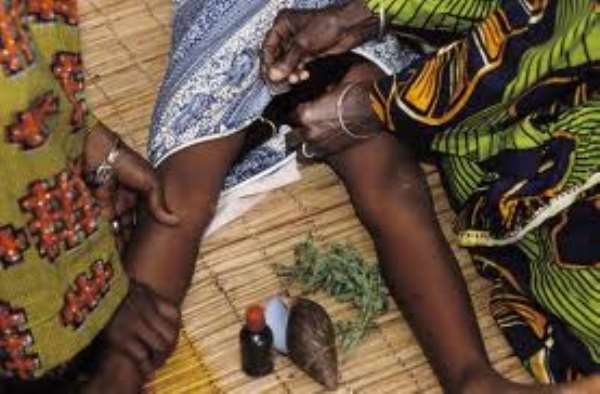 Accra, Sept. 5, GNA - Cases of Female Genital Mutilation (FGM) is on the rise in Ghana despite a ban placed on the practice.

This was contained in a UNICEF multiple Indicator Cluster (MICS) Survey in 2007, which puts FGM at 3.8 per cent for women between 15 to 49 years and four per cent for the most recent survey of 2011.

An Act to amend the Criminal Code 1960 (29) to change the reference 'Female Circumcision' to 'Female Genital Mutilation to reflect the actual nature of the offence, widen the scope of responsibility in relation to the offence and provide for related matters was enacted in 2007.

However, available records show that the practice was on the ascendancy instead of decreasing due to the breakdown of educational and awareness and control programmes in addition to the inability of law enforcers to effectively enforce the laws on FGM.

The practice is prevalent in 29 African countries while the three northern regions as well as the Brong Ahafo Region and Zongo communities in some urban centres in Ghana continue to practice the FGM.

The workshop was aimed at deliberating on the situation of FGM in Ghana and to discuss the 2012 United Nations Resolution 67/146 on FGM to help develop a national plan action for the dissemination, domestication and implementation of the resolution.

Madam Alijata Sulemana, Member of Parliament (MP) for Tumu Constituency in the Upper West Region, said FGM continued to cause serious havoc to the lives of many married women, who were either losing their marriages or were experiencing stalled marriages due to their inability to meet their sexual obligation towards their spouses.

In an interview with the Ghana News Agency (GNA) on the sidelines of the workshop, Madam Sulemana said being a victim of FGM herself, she had been encountering many marital problems in her marriage right through child-birth as well as meeting her conjugal right as a wife, adding that she was more prepared to openly join the campaign to eliminate the practice in Ghana.

'I even wanted to give birth to five children but had to stop at three because of the many serious complications and needless pain I go through during delivery,' she told the GNA.

'FGM is never a good thing, it breaks homes- the most sensitive thing that will make me have sexual contact with my husband is taken out,' the MP said.

Madam Sulemana said all efforts must be put in place to ensure that the practice was eliminated totally from the society, adding various educational and awareness programmes should be embarked upon to sensitize the people on the dangers and harmful effects of FGM was causing to women to make the perpetrators stop the practice.

Mrs Florence Ali, Executive Director, GAWW described FGM as the most dangerous and degrading surgical procedure that women and girls were made to endure in the name of tradition, adding it was a worrying trend that the cases were rather rising rather than reducing.

She said the procedure of FGM involved the total or partial removal of the external female genital organs and that the practice was a deep -rooted gender inequality that assigned women an inferior position in society with profound physical and social consequences.

She indicated that the UN Resolution entitled: 'Intensifying global efforts for the elimination of Female Genital Mutilation' came into being as a result of several years of lobbying and advocacy by the Inter-African Committee (IAC) on harmful traditional practices affecting women, children and its partners.

The Resolution urges member countries to condemn all harmful practices that affect women and girls, in particular FGM and to take the necessary measures including enforcing legislation, advocacy, awareness raising and especially, allocating sufficient resources to the implementation of policies and programmes aimed at eliminating FGM by engaging all parts of society.

Mrs Ali said GAWW being one of the 29 National Committees of the IAC decided to hold the workshop towards the review of national strategies to eliminate FGM in Ghana.

Mrs Chris Dadzie, Chairperson of the GAWW Board, said FGM was a basic gender issue that went beyond domestic violence. 'It is mutilation of the part of a normal organ of girls and women and not cutting, circumcision or surgery but actual mutilation of the clitoris that causes much harm to women'.

She, therefore, called for implementing strategies that would ensure that institutions which were supposed to implement the FGM law in Ghana were up to the heels to ensure that the practice was totally eliminated to save the lives of women in the country.

Mrs Benita Okity Duah, Deputy Minister of Gender, Children and Social Protection said apart from the UN Resolution on FGM elimination ratified by Ghana, there were many laws in Ghana including the 1992 Constitution that prohibited all forms of discrimination against women.

She said the Criminal Code Amendment Act 2007 Act 741 also made comprehensive provisions to deal with FGM with enhanced penalty to deal with perpetrators of the practice, adding those laws needed to be implemented to the letter by all stakeholders, including police and traditional leaders, who were the custodians of customs and traditions to ensure that all outmoded customs which were socially harmful were eliminated.

She said reports on FGM should be included in the monthly reports from clinic to the hospital for monitoring purposes as well as more education through primary health care programmes and the use of community health nurses in door-to-door contact campaigns.

Mrs Okity-Dua further called for urgent consultative fora involving all actors to discuss at length the strategies for the domestication and implementation of the UN Resolution 67/146 and all other domestic laws relevant for the elimination of FGM and further demand full protection of women's rights.