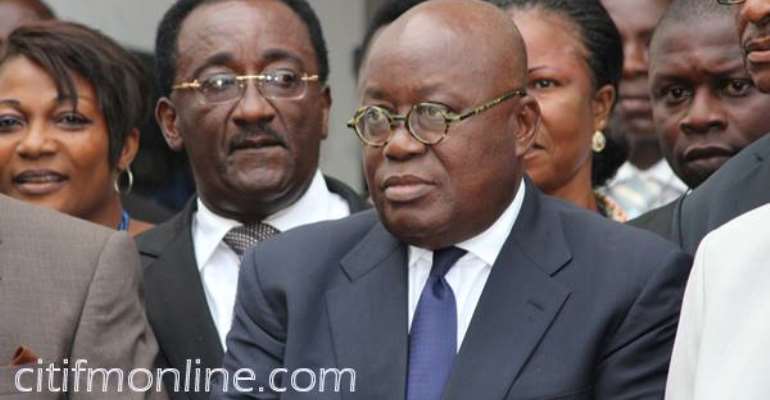 An English literary critic is reported to have once said that the greatest virtue in life is real courage to face facts and live beyond them. When faced with the judgement that the National Patriotic Party (NPP) had lost the election petition they lodged with the Supreme Court, Nana Akufo-Addo rose to the occasion with grace and courage, faced the fact and finality of the ruling within minutes and is now basking in a glorious sunshine of plaudits hitherto unfathomable. If Nana lost the election petition he won the peace and peace for Ghanaians is of a much superior calling than power per se.

Not unexpectedly a long queue of distinguished private individuals, religious leaders, civil society organisations, national institutions, international organisations and even sceptics of African democracy have all been jostling for positions to ululate the two times NPP Presidential candidate who until 29th August 2013, the date the Supreme Court read its verdict, could easily go down in history as one of, if not, the most vilified politicians in the Fourth Republican democratic dispensation of Ghana.

Rightly or wrongly the son of Ghana's President in the Second Republic have stood suspect of pursuing a Presidential ambition in ways and utterances that smacked more of an adventure of self-actualisation than of anything patriotic to offer the nation. And there are those who would argue till the cows come home at Christmas or Homowo that Nana Akufo-Addo boomeranged the mud on himself almost deliberately if not recklessly.

In the run up to the December 2012 elections for instance it is possible that no other politician suffered as much personality attacks as Nana did, the most notorious being the persistent accusation of doing drugs, whatever that means. Tried as he could to shrug it off and brush himself up it won't just go away; not only because wikileaks alluded to it but also because as a onetime Attorney General, Nana is said to have de-confiscated the assets of Raymond Amankwaa and George Adu Bonsu aka Benjilo whose assets had been confiscated for pushing drugs big time.

Then there was the one-off albeit infamous 'all die be die' paroxysm of which he has never properly managed to explain to Ghanaians the context that warranted it. What seemed rather successful was the ability of others to seize upon it and package him for Ghanaians as desperate, bellicose, war-mongering, violent, bullish and 'too arrogant with no people skills'. As if in response, Nana describes himself as calm, composed, courageous and cultured (see Nana Akufo-Addo's Biography in facebook).

The critics begged to differ and zoomed their scrutiny on his professional pedigree as a celebrated lawyer for fault lines. As Attorney General, Nana had caused a case to be presented in court in the name of the President against a former Chief Executive of the Ghana National Petroleum Corporation (GNPC) for causing financial loss to the state. The book suggests however that the case should have been presented in the name of the Republic, not the President. For this alone Nana has not been spared the whipping tongues of the legal know betters from sun rise to sun set.

However, the perception that Nana claims leadership of Ghana as his birthright remains the unkindest punch below his belt. Of the legendary Big Six so popular in Ghanaian independence history William Ofori Atta was his uncle, J B Danquah was his grand uncle and Edward Akufo-Addo was his own biological father. By default therefore half of that number is blood family to Nana. Like his father in the 2nd Republic so must son in the 4th Republic be President. Although Nana is not on public record of staking his Presidential ambitions on claims to blue blood this yarn has been just as viral as any other flung at him.

This could only stick on a man already under siege. Otherwise why would a country that celebrates chieftaincy be wary of a political dynasty? Why not the Akufo-Addos in Ghana if it works for the Kennedys and the Bushes in the United States? In India the Gandhis are legendary. Much closer home in Africa the Kenyans, by their election of Uhuru Kenyatta, son of the first President of independent Kenya and a man indicted by the International Criminal Court (ICC), have propositioned quite strongly it may be safe to place the destiny of a nation in the hands of one born with a golden spoon stuck in his mouth.

For Ghana's Nana Akufo-Addo it works not for him but so much against he had to both literally and loudly declare 'I BELIEVE IN GHANA' to expect audience. When that seemed not to suffice he took to platforms to elaborate further. To believe in the country he meant 'to be proud of Ghana's rich diverse culture, customs, traditions and history ... and to be devoted to its welfare and freedom' in 'a state where fairness and social justice are essential attributes of its body politic' (Nana Akufo-Addo's Biography in facebook refers). Laudable as this may seem, almost half the nation turned to his blind side and chuckled as if to suggest this is no news. As a matter of course anyone running for President has to believe in Ghana.

Nana was unflustered. He stayed his focus and articulated his persuasive best with impeccable English. He reminded Ghanaians of the high cost of secondary education for parents. If elected President he would make paying of school fees a thing of the past and thus wipe the tears off the cheeks of those living below the so-called poverty line. Nana argued free secondary education will additionally boost the knowledge base of the nation and leap frog national development into the premier league of first world countries.

This was probably the most dangled carrot of his promises but arguably the unique selling point of his entire campaign. In a country where education is a key pursuit in every family you would expect Ghanaians to embrace it with spontaneous alacrity throughout the country. Instead many paused, then stared hard at the lips of this disciple of property owning democracy and shook their heads with utter dismay. It was populism, they concluded, construed to hoodwink naivety into a ploy of becoming President at all cost.

Almost with a sigh Nana still urged and dared his compatriots to dream BIG, think BIG and have BIG faith in him and in themselves. He will guarantee and promote values of the rule of law plus the freedoms of speech and association so dear to Ghanaians and so fundamental to democracy. With this final appeal he cast the dice of his Presidential fortunes only to learn from the referee of the 7th and 8th December 2012 elections that Ghanaians preferred John Mahama of the National Democratic Congress (NDC). This was incredible! Nana would challenge the results through due process of law and to the Supreme Court he went.

The Fourth Republican Constitution of Ghana provides for contesting election results in the Supreme Court if the sanctity of the ballot box is deemed to have been infringed. When it comes to Nana, doing exactly that is highly divisive. He has been lampooned accordingly even by some who pointedly dared him to go to Court when he first indicated disagreement with the results as announced by the Electoral Commission. But now that the Court has spoken and Nana swiftly conceded many are those who are seriously revising their notes of a man they once feared to sleep with their eyes closed if he ever became President.

Certainly, Nana has suddenly and finally achieved national validation as a democrat and a patriot no matter the motives of his decision. How Nana further conducts himself from now on would determine his place in that chapter of eternal greatness reserved only for the very cream of Ghanaian leaders in the history books of the nation. Until then the enfant terrible of Ghana politics pre-29th August 2013 has become for now the peace maker and a true statesman of post-29th August 2013 Ghana polity. Maybe Nana had to lose the elections and the petition to win the peace for Ghana so 'we can all move on in the interest of our nation' (his own words). Clearly, the onus remains on Nana to stay this cause of peace.

The writer is a freelance International Relations analyst and a political commentator. He can be reached at [email protected]