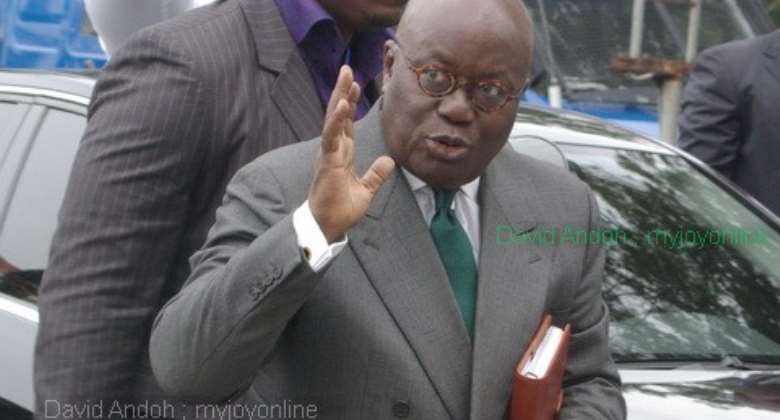 Nana Addo Dankwa Akufo-Addo, the first petitioner in the dismissed Presidential Election Petition on Thursday called to congratulate President John Mahama on his affirmation as the validly elected president of Ghana.

Nana Akufo-Addo later addressed the media at his residence in Nima, Accra. Below is the full text of the speech the NPP leader.

I have called President John Dramani Mahama and I have now congratulated him on being elected the fourth president of the Fourth Republic of our country.

The Supreme Court of our nation has spoken and the result of the December 2012 presidential election has been confirmed as having been won by the candidate of the NDC, President Mahama.

As I said earlier, whilst I disagree with the Court's decision, I accept it. I accept that what the Court says brings finality to the election dispute. We shall not be asking for a review of the verdict so we can all move on in the interest of our nation. Everything in my bones, in my upbringing and in what I have done with my life thus far makes it imperative that I accept a decision made by the highest court of the land, however much I dislike or disagree with it.

I am saddened by the verdict and I know that many of our supporters are saddened too. However, for the sake and love of our country, we must embark on a path that builds, rather than destroys, to deal with our disappointment.

I appeal to all members and supporters of our party, the NPP in particular to accept the verdict of the court. Even in our disappointment we can take pride in the way we have conducted ourselves. Even in our disappointment we can take pride that the NPP has again led the way in deepening Ghana's democracy. To quote one of the Supreme court judges, “After this case, elections in Ghana will not be the same.” In other words, we might not have been given the ruling we sought, but thanks to our efforts, we can hopefully look forward to an improved electoral process in our country.

I am grateful to my co-petitioners, Jake Obetsebi Lamptey and Dr. Mahamudu Bawumia for their hard work, dedication and their commitment as we pursued the legal options available to us.

I must also thank my party the NPP, the officials, the foot-soldiers and supporters for their unflinching support and belief in me. The National Council of the party, having taken the decision to go to court, has been unwavering in its support.

I also want to thank my daughters and my wife, Rebecca, for their love and extraordinary support. There have been friends who have made unbelievable sacrifices of time, energy, ideas, money and a listening ear. I am grateful to all of them.

I am sure there are many people wondering what I envisage for my political future. I intend to take some time out of the hurly burly of politics, get some rest, reflect and then announce whatever decision I come to in the not too distant future.

In Ghana's 56 year history, this is the first time a presidential election petition of this kind has been filed and pursued through the courts. The whole world has watched us in wonder and admiration. Our reaction to this judgment will be watched keenly in Africa and beyond and will set a precedent for generations to follow.

There are myriads of problems facing us as a people. This is the time for us all to come together and work to find solutions to the challenges that confront our people.

To my party, the NPP, I say we have a lot to be proud of; there are more than three years left in this political cycle to be a worthy opposition, and also position ourselves for the battle of 2016.

Today, let us wish our President well and thank the Almighty for His mercies to our nation. The battle continues to be that of the Lord's.

Hottest Photo Reports
Catch up with all the political quotes from our politicians.
Advertise here
More from Politics
ModernGhana Links
Practical reforms is needed in the public sector — Nana Kay
Prioritise interest of Ghanaians over your obsession to stick to power – Fiifi Kwetey to Gov’t
Founders’ Day: 'Crazy' Kwesi Pratt is 'insane' for kicking against celebration of J.B Danquah
TOP STORIES