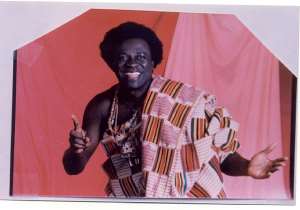 WHY OAU/AU Leaders will never Commit Suicide by Changing the Existing Colo/Neocolo System that Benefits them so Much By © Prof Afrikadzata Deku, Docteur d'Etat, PhD ; [email protected],

BECAUSE :
***1.They are the Beneficiaries of the Existing Slave/Colonial/Neocolonial Western/Arab/Jewish Status Quo and Foreign Borders that exist on the Carcasses of our AfrikaPeople

***2.Changing it will mean Committing Suicide which they will never Do

*3.They will be ZERO politically, economically and socially WITHOUT THE EXISTING Colonial/Neocolonial System That Created and Gave Birth to them

**6.They are all allowed to be in Power and Kept in Power only When they Agree in TOTO to accept, defend, promote, oversee the Existing Colonially Created and Neocolonially Dominated States without Nation all over the Continental/Diaspora AfrikaWorld

**7.The Few of them like President Osagyeofo Dr Kwame Nkrumah, President Sekou Toure, President Lumumba, President Modibo Keita WHO DARED CHALLENGE THE EXISTING STATUS QUO AND TRIED TO REPLACE IT WITH OUR OWN AFRIKACENTRIC UNITED STATES OF AFRIKA WERE ISOLATED, VIVIFIED, CRIMININALIZED, CALLED TERRORISTS, COMMUNINISTS, SOCIALISTS, ANTI-WESTERN AND FINALLY REMOVED FROM POWER AND KILLED/ASSASSINATED TO SILENCE THE REST OF THEM

*10.These Foreign Powers will Never Speak to their own People in Foreign Languages and Yet will consider it an Act of War if any of our leaders Replace their Foreign languages with our own Continental AfrikaLanguage

*11.They will Never Govern themselves in Foreign Languages and Yet Make Sure they program and reward their Pro-Status Quo Agents in Power for them To Accept their Slave/Colonial Lies that the Continental/Diaspora AfrikaWorld and People Cannot do without their French, English and Portuguese and Arabic Languages

*12.They will never live within Foreign created Boundaries and Systems and Institutions and Yet they make sure all Continental/Diaspora Afrikans continue to live Within their Slave/Colonial British, French , Portuguese and White American BORDERS which exist to Keep Continental Afrikans Ignorant of each other, Fighting, Divided, Dependent , Impoverished, Needy and Easily Dominated, Controlled, Exploited and Used

*14.They will never allow themselves and their Children to be Educated and Trained Foreign Ways and Yet they Make sure Education/Training for us Can only Be French, English, Portuguese or White American-based and oriented meant to TURN us into their PHOTOCOPIES and to serve their needs instead of our AfrikaNeeds

*15.They will never allow themselves and their Children to be named after Foreign Ancestors and Yet, they will consider it an Act of War if we drop their Foreign Names for our AfrikaNames

*16.They will never Dress Afrikan and Yet they will make sure our Leaders dress in Western Suits and Shoes meant for Cold Weather While they Sweat in them like ROASTED PIGS In our Hot Tropical Weather

*17.They will never Bleach their Skin, Change their Noses or Chemicalize their Hair for someone else and Yet We are Fooled into accepting their Lies that it is Progress/Modern to Bleach our AfrikaSkin, Change our AfrikaNose and or Kill our AfrikaHair With

*18.They all know NO COUNTRY CAN BE INDEPENDENT, SOVEREIGN AND FREE WITHIN COLONIAL/SLAVE BOUNDARIES and yet they continue to FOOL our Leaders and People that Continental/Diaspora Afrikans Are Independent And Emancipated and to Make Fools of ourselves by Celebrating Yearly Our Independence/Emancipation Day all over the Continental/Diaspora AfrikaWorld while they laugh at us

*19.They all Know their COLONIES turned into States without Nation all over the Continental/Diaspora AfrikaWorld ARE NOT AFRIKACREATION AND AS SUCH ARE NOT AND CAN NEVER BE 'Independent or Sovereign African States or Nations or Countries or Govts ' and Yet, they make sure we accept, treat , respect, protect, promote and defend their COLONIES as our Independent, Sovereign African states, nations, countries or govts'

*20.The Leaders who Perform so Faithfully, Zealously and Blindly all the above Neocolonial Roles with Pride and Dignity Are Rewarded with FOREIGN political, economic and social CRUMBS, LEFTOVERS, SURPLUSES, AIDS, CHARITY AND PITY which they don't need and will not Even Feed their Dogs and Cats with

*21. And the 1% FEW AFRIKACENTRIC Leaders, Scholars and Elite Among them and Outside the System Who Dare Speak out the Above Afrikacentric Truth and Expose them Are Isolated, Ridiculed and Silenced

*22. And as long as they make sure they don't touch And Stay Away from Any TABOO TOPICS AND AGENDA like having our own Continental AfrikaConstitution for our own United States of Afrika to Empower and Solve Continentally Afrika's Problems the AFRIKAWAY, they are Accepted, Praised, Protected, Promoted and Rewarded by their Foreign Creators and Financiers as our ' African leaders, African scholars, African Experts' And Are Allowed to Throw their Weight around as BIG FISH in their little Ponds in their Little Paris, Little London, Little WDC and Little Lisbon in Afrika With all the Crumbs Foreign Money Rewards they need to enjoy life in their Presidential Mansions Built by Foreigners with Foreign Money and their Foreign Private Jets and Planes With their Yes-Master Ministers and Law-Makers and Ignorant PhDs and Ignorant Professors VOMITING back to their People their Foreign LIES as our Truths and Rejecting our Afrikacentric Truth as our Lies .

*24.So we have a TOOTHLESS AOU turning itself into another TOOTHLESS AU with Foreign Titles, Foreign Charters, Foreign Articles, Neocolonial Agendas Written for them by their Foreign Masters To Implement With their Empty Annual Conferences, Toothless Resolutions and Peace Keepers paid for by Foreign crumbs Money and Doing Everything within their power Not to Suffer the Fates of the Nkrumahs, the Lumumbas and the Sekou Toures of Progressive Anti-Foreign and Pro-AfrikaInterests and Power Leaders And Celebrating with Pomp with Foreign money crumbs, their 50 Year Anniversary for SUCCESSFULLY BLOCKING AND PREVENTING THE BIRTH OF OUR UNITED STATES OF AFRIKA WHICH IS WHAT OUR SUFFERING AFRIKAPEOPLE NEED AND NOT THEIR TOOTLESS AOU/AU THEY ARE CELEBRATING TODAY IN THEIR IGNORANCE WITH THEIR FOREIGN CREATORS .

*25. But whether they and their Foreign Supporters like it or not, our Beloved Mother Continental Afrika shall SOON BE UNITED INTO OUR OWN AFRIKACENTRIC CONTINENTAL AFRIKANATION AND GOVT WITH OR THEIR SUPPORT WHICH WE SHALL CALL, THE UNITED STATES OF AFRIKA OR USOFA WHICH ALONE CAN PROVIDE US WITH THE CONTINENTAL AFRIKASUPER POWER , VISION, PLATFORM , LEADERSHIP, AGENDA AND PLAN TO IMPLEMENT OUR OWN AFRIKAMARSHALL and FREE POLITICALLY, ECONOMICALLY AND SOCIALLY OUR SUFFERING PEOPLE FROM THEIR INVISIBLE HELL OF COLLABORATION, SUPPORT, PROMOTION, OVERSIGHT , FEET-LICKING , ASS-KISSING AND YES-MASTERISM OF GREEDY AND SELFISH FOREIGN POWERS AND THEIR FOREIGN BORDERS, SYSTEMS, INSTITUTIONS , POLICIES, PLANS, AGENDA AND SOLUTIONS WHICH EXIST SOLELY TO KEEP US IGNORANT OF OUR AFRIKAIDENTITY , FRAGMENTED, DEPENDENT, NON-VIABLE, DOMINATED, CONTROLLED, INFLUENCED, USED, ABUSED , FOREIGNIZED , WESTERNIZED, ARABANIZED, JEWINIZED, CHRISTIANIZED AND ISLAMIZED FOR THEIR GUARANTEED PROFIT AND OUR GUARANTEED LOSS UNTIL WE WAKE UP TO SAY NO TO THEM .