If Africans Are Not Stupid, Why Are We Allowing Idiots To Think For Us Today? 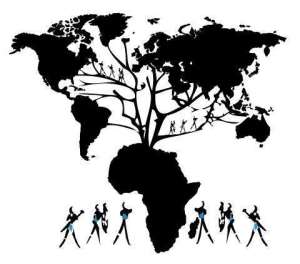 Why would any sane African, with even the brain of an ant and a modicum of self-respect, allow people like the following, to think for him in the year 2013? The Church fathers who with their morbid mob in 415 CE, and acting under the behest of their St. Cyril of Alexandria, tortured and assassinated Hypathia Theon, a great African philosopher and scientist, who was the Chief Librarian of the Library of Alexandria at the time, for promoting a venue and books for the acquisition of knowledge? The Church fathers whose Council of Mainz in 847 CE, approved only the rhythm method of contraceptive for all, and condemned the withdrawal method? The Church fathers whose Pope Boniface VIII in 1302 CE, declared surgical operation pure devil's work and condemned physicians doing it.

The Church fathers, that condemned Nicholas Copernicus (1473 – 1543 CE), for claiming that the world was round, in conformity with facts already established by the Mystery System? The Church fathers that burnt William Tyndale at the stake in 1536 CE, for translating the Bible from Hebrew and Greek into English?

The Church fathers who, doing Henry VIII bidding, beheaded Thomas Moore, the author of The Utopia, because Catholicism condemned The Utopia. Thomas Moore, the social philosopher, disenchanted with the abuse of power during his time, wrote The Utopia: a blue-print for communistic living, recommending close interaction between members of society, based on kingship and strong ties. The families practice their trades according to guilds. The members have affinity and respect for their environment. Family ties are strong and divorce is frowned upon. Members who do not conform are banished from the community. Commercialism is discouraged. These were totally evocative of African traditions. The book was put in the index of the Church's forbidden books. In 1935 CE, the infallible Church made him a saint, and dropped all the charges made against the book.

The Church fathers who burnt Giordano Bruno (1548 – 1600 CE), at the stake for supporting Copernicus and for saying: “I can see in a far distant future when humans will fly in their machines like birds (planes).” He was condemned by the Church for heresy of novelties.

The Church said: “If God wanted humans to fly, He would have given them wings.” Giordano Bruno, on February 19, 1600, still impenitent, his tongue tied, his body nude, bound to an iron stake on a pyre in the Piazza, was burnt alive.

The Church fathers who put Galileo under house arrest until his death, for supporting Copernicus and Eratosthenes. Galileo (1566–1642), the famous Italian Nobelist, proved that the world is round and that it revolves around the sun. His 'Eppur si muove' –“But it (the earth), does move,” changed the way humans knew their world from religionists'

earth-centred universe, to Sun-centred Solar System. Galileo paid with his life for the great discovery. His sin was described as, “heresy of a moving Earth.” The Church argued that the Earth was the centre of the universe and does not move, and that the Earth was stationary like a cock on water, carried by four mighty horses. The Church fathers were still repeating this argument in 1789 CE.

In 1758 CE, the Church was preaching against inoculation and vaccination as the Satan's job. Some clergy and priests physicians, formed an anti-vaccination society, (similar to NGO's of today), to fight against inoculation and vaccination. In 1789 CE, the Church began preaching against life Insurance, arguing that it is a grave violation against God's power over life and death. Papal 'Infallibility' was re-proclaimed in 1870 CE. Pope Pius IX, considered anti-Semitic, condemned eight humanists/scientists for their ideas.

In 1899 CE, Pope Leo XIII condemned Americanism and their clerics' view that Monasteries and Nunneries are against human rights.

In 1905 CE, Aleister Crowley founded Satanism religion in Los Angeles, registering it with the name, Ordo Templi Orientis. Its Bible is the Christian Bible and its book of laws says: “Satan is Jesus' hit man.

Hitler is Ordo's saint, because Hitler is 666,” the numerology of the beast in Revelation. The Church fathers claim that Satan brought evil to mankind, and their Holy book is not ambiguous about who Satan is.

The Bible proudly describes Yahweh as Satan, meaning, that Pope Benedict XVI successor, Pope Francis, an Italian, born in Buenos Ares, is the earthly representative of the 'Devil,' and the Vatican is the Devils' Den. In Matthew 28:18 Jesus says: "All power is given to [me] in heaven and [in earth]," and Yahweh, the father of Jesus and God of the Christians say in I John 5:19: "The whole world in [under control] of the [evil one]." Jesus himself confirms this in Luke. 12:

51-53, that he came to the world not to bring peace but to cause division and discord among people.

In 1910 CE, Pope Pius X, burnt many scientists and thinkers alive for being humanist members of A Comte's Positivism. He put their works in the index of forbidden books. Adolf Hitler in 1933 burnt 25,000 un-German books in Berlin.

These are the narrow-minded people African Church goers are allowing to think for them in the year 2013 CE? I raise these issues because I am an African and I do not want to be mistaken for a nitwit.