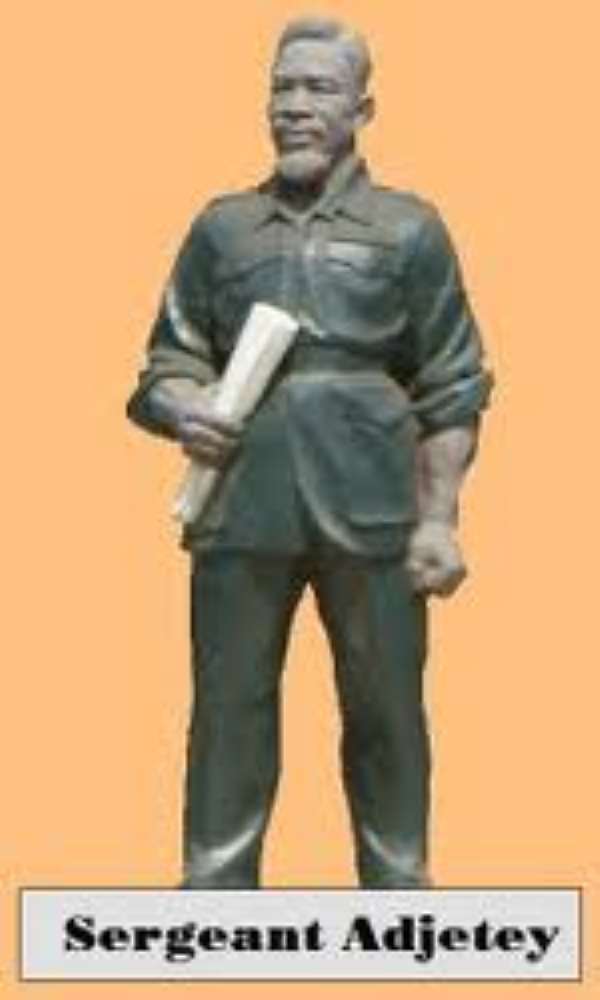 The precursor to the event was the boycott of the Whiteman goods. The reason behind the boycott was to register dissent toward the manner the whiteman treated the African. There was so much exploitation in sale of goods. As a Chief of Osu Alata, Nii Bonne is credited for rallying the masses with his Anti-Inflation campaign which he personally financed and waged to successful conclusion, thus relieving the mass of common of people from economic distress.

Sixty-five years ago today, that's 28th February 1948, negotiated price reduction was to come into effect and the boycott which had been in place, since 26th January 1948 was to be called off. This was the event that really sparked off the great agitation in colonial Gold Coast. The price decrease which to end on the day 28th February, 1948 was not well handled. The expectations of shoppers were not met as anticipated and indigenes killed for no provocation.

The same day a deputation of unarmed Ex-Servicemen, led by sergeant Adjetey and others were fired upon on by the police on their way to present a petition to the Governor, at the Christiansborg Castle (Osu Castle). It was the incident that propelled the wave of riots.

Sergeant Adjetey and others from Ex-Servicemen's Union were killed and some of the demonstrators were also wounded. The killing of the Ex-Servicemen added fuel to the discontentment and charged atmosphere, sparking off spontaneous 'riots'. The news of the shooting infuriated people, and they first took to looting and the burning of shops of the European Companies and the Syrian merchants.

Those who master-minded the boycott was the Joint Provincial Council Chiefs. It was with their backing that, on the New Year's Day 1948, Nii Bonne, Chief of Osu Alata addressed an emotional message to his fellow chiefs calling upon to fight and die for the liberty and freedom our country.
The boycott was very effective, worked well. It was observed country wide. Just like the boycott, when the “Riots” started it took on the same country wide spread. Properties worth over £2 million worth was destroyed and over 137 people killed.

In a broadcast by Governor Sir Gerald Creasey, in which a “State of Emergency” was declared, he spoke of conspiracy, and that the leading members of the United Gold Coast Convention had been arrested. The “Big Six” or call them “Communists” was arrested. One could easily see through the plotting of the British, because it was their outlook that was more Communists. Just accuse your opponent as such, in reality you're at itl. The usual propaganda rhetoric's!

In reality, the United Gold Coast Convention had little connection with the Ex-Servicemen's Union or the Anti-Inflation Committee of Nii Bonne. At the time the “Riots” broke out J.B. Danquah and Kwame Nkrumah was at meeting outside Accra and none of Leaders had prior knowledge. They never anticipated riots.

Leadership is the capacity and will to rally men and women to a common purpose and the character which inspires confidence. It was through The “Big Six” and Nii Bonne influence during the period of agitation which became the tool for Ghana's eventual decolonization.

Their Desire was the key to motivation; nevertheless it was determination and commitment to an unrelenting pursuit of their goal - a commitment to excellence - that eventually will enable them to attain the success they seek.

This kind of change is what the Nana Addo and NPP are seeking to effect. Not through “riots” as of yester-years but through “legal” processes. Why fear change!

The only way keep away from people who belittle your ambitions is to remain focused. Small people always do that, but the really great make you feel that you, too, can become great.

The most important things to understand in this life, is that, there are encouraging things that we encountered every time you meet a situation. Though you may think of it at the time as not possible and you endure the sufferings of hopelessness. Once you have met it and endured or lived through it, you will find that, forever after you are released from captivity than you ever were before.

As people we must recognized that, “Human progress is neither automatic nor inevitable... Every step toward the goal of justice requires sacrifice, suffering, and struggle; the tireless exertions and passionate concern of dedicated individuals”. Martin Luther King, Jr.

Just tell yourself, I can take the next thing that comes along. The danger lies in refusing to face up to the fear, in not having the courage to come to grips with it. If you fail anywhere along the line, it will take away your confidence. You must make yourself succeed every time. You must do the things you think you cannot do.

It must be pointed out that the Communists (P/NDC) turned Social Democrats failed and continues to fail, literally, to deliver the goods to the people. They promised bread but produced food shortages and rationing, except for Party members and their apparatchik in their excessively superfluous salaries and allowances.

They promised the people quality social services but delivered them into collectives of powerless segments. They promised peace and justice but are sending young men off to police cells for demanding probity, accountability and transparency.

P/NDC Governance, the dark tyranny that controlled the nation and was responsible for the deaths of an estimated 300 victims and tens of hundreds of human rights abuses during the 1980's and 1990's must not be allowed to resurrect. These Communists tactics applied in the past must be resisted by all who believes in the rule of law, stands for truth and true democracy.

We must remind ourselves that the strength of character and the ability to win, coupled with the desire to succeed, and the urge to achieve our full potential, are the secret that will open the door to personal excellence.

Sixty-five years ago, it was a failed negotiated price and the gunned down of unarmed Ex-Servicemen that sparked off the “riots” and it bring us really 'freedom and liberty'.

I doff my hat for all who believe genuine justice than forced and faked peace. “You are never too old to set another goal or to dream a new dream”. C. S. Lewis