Exit One: Ghana Out Of Afcon 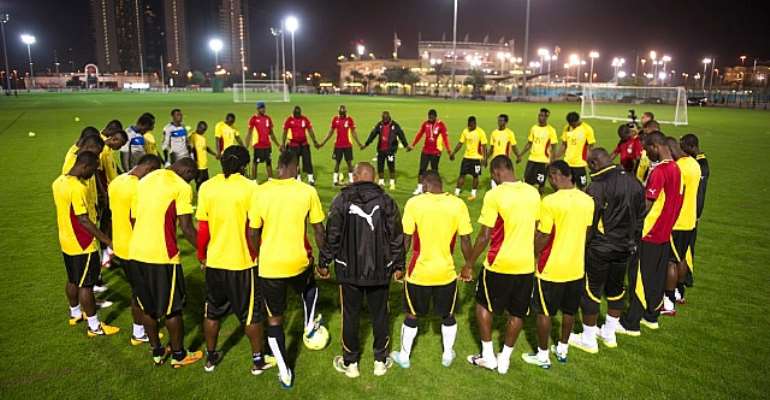 Greetings from the Most High God to the Church, Government and People of Ghana.

Ghana out of AFCON race for continental honours in soccer in Africa is and must be seen as a spiritual lesson,A WARNING and CALL FOR REPENTANCE and SEPARATION from IDOLATORY, CORRUPTION and MOCKERY of GOD which has hit the country and is raging like a consuming fire destroying THE GOOD, GREAT WORKS, BLESSEDNESS, HOPE and DESTINED GLORY of GHANA.

When Ghana was set to meet Burkina Faso at the Semi-Finals, the Lord God Jehovah told His servant that Ghana cannot go any further. That, Ghana will lose the match and be shown the exit. He described it as EXIT ONE which will precede other exists in the affairs of the country as a whole.

The prime cause of Ghana's EXIT from AFCON is CORRUPTION. According to the Lord much a money was expected to accrue to Ghana from the AFCON tournament if Ghana wins the Semi-Final and proceeds to the Final.

Because of this, arrangements were made in advance to subject such monies including donations from corporate entities into secret distribution channels set in place. That even the players will not be informed of all the monies received.

Beloved citizens of Ghana, we have written already about how corruption has infested the countrylike an epidemic and has eaten deep into the politics and governance of the country and the economy as a whole. Corrupt government is creating corrupt institutions and corrupt economy which in turn will lead to the destruction of the nation.

NO SHAME WITH CORRUPT GARGANTUAN PAYMENTS
For example, it is very unfortunate, indeed most unfortunate that the word gargantuan which came into the public domain in connection with alleged frivolous judgement debt payment was gleefully used without any shame or compunction by political party candidates disclosing as to how General Election 2012 will be won. That is to say, the nation was being informed in advance and without any shame how the election will be conducted and won in open yet suspicious, corrupt and fictitious manner.

It follows that, if any candidate, party or independent wins the election bygargantuan frivolous judgement debt payment way, he will have NO SHAME, NO COMPUNCTION, NOR FEAR of GOD or public outcry to claim and indeed declare that it is God who made him/her win the election. Churches, mosques and even festish shrines will pour out praises to God.

In this regard, should Ghana win the Semi-Final, people will rejoice and shout with glee and much ecstasy the victory, notwithstanding the pen suspicious antics of Tunisian Referee Slim Jdidi. Those who planned to benefit from the tournament will be the most vigorous in celebrating the victory.

Beloved, should the Holy and Righteous God of Ghana overlook and allow corruption, thievery and robbery, EVIL WORKS, EVIL MEN and EVIL PRACTICES to have dominion in football and sports, in public institutions and government, in private and public sectors of the economy and national affairs in general? Should God continue to save Ghana?

In conclusion, let us humbly request CHURCH LEADERS, Apostles, Prophets and Bishops, Evangelists, Pastors and Teachers, Lay Leaders and all Saints in general TO RESIST and DENOUNCE the OPEN CORRUPTION, FRAUD and ROBBERY and the mockery of God in the land. Because of corruption and ripe falsehood, the Church and the Faith are rather creating hoards of skeptics and faithless, unbelief and of false prophets dishing out false hope to the perishing and dying in sin, evil and wickedness.

May we all take note that Ghana out of AFCON (2013) is EXIT ONE soon to be followed in other sectors of national life.

May our leaders in Church and State, Government, Politics and Business lead the nation in repentance and RETURN TO GOD, HIS SPIRIT and TRUTH, RIGHTEOUSNESS and JUSTICE.