The Sad End Of Dr. Afari-Gyan 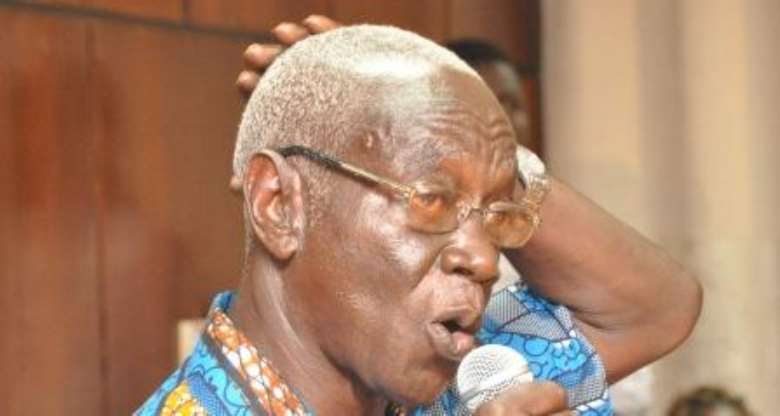 Dr. Kwadwo Afari-Gyan's name has probably become synonymous with the gargantuan electoral fraud of the millennium. Until the general elections of December 7, 2012 in Ghana, almost the whole wide world knew and held him in high esteem as an international celebrity when it comes to the conduct of elections. But little did we Ghanaians know that his actions and inactions somehow were fraught with some uncertainties to paint him like an angel.

Since every bad turn deserves a favour, and behind/beside every successful man there has always been a woman, this doctor of letters and former senior lecturer at the Ghana's premier university, would not pass the test of time now as you read this piece without having muddied himself with, or more so, stigmatized his name with electoral fraud and believe you me, Ghanaians, yet unborn, will come to learn of this name in future.

The name 'Afari Gyan', who, until the 2012 elections, was widely acclaimed and inarguably accepted as a magic wand when elections were concerned, does not, any longer, conjure any prominence at all – probably, not till the end of his lifetime because of his involvement with the collapse of Ghana if, but not for the wisdom of the NPP hierarchy.

Periodically, this wonderful man until this particular election, had been appointed by either the AU or the UN in the last 10 years to oversee many elections that, otherwise, would have brought untoward hardships that normally degenerate civil strife and conflicts arising out of electoral malfeasance.

These international bodies have tapped his expertise and experience to ensure people did not flee their homelands to live as refugees in foreign lands – and all these, he has done with precision and perfection.

NICHE – GRACE TO GRASS
If there were any particular man or individual who has gradually carved a niche for himself in the last 20 years as a public servant in the West African sub-region, then you don't relegate this man to the background in terms of elections.

The embattled electoral wizard has done extremely well to raise the flagship of Ghana aloft. Fine, but his involvement by acquiescing to the treachery of the NDC to enable their flagbearer, who it is believed, was Her Ladyship Georgina Theodora Wood's student at the Assemblies of God Church's Sunday School for years, to become president of Ghana by all means and at all cost, and whatever circum -stances it might be, or form it takes, was nothing of concern to him.

It is rather unfortunate that both the doctor and the president have allowed themselves to be possessed by greed, avarice, anger, arrogance and scramble for wealth and to be deceived by the devil and serpent like the Adam and Eve's era to bring untold hardships on Ghanaians.

Despite the religious doctrine imparted to him, he never inculcated anything meaningful that could change his lifestyle. And to the doctor of letters; after being groomed by Justice Josiah Ofori Boateng, chairman in 1992 when he was one of the two vice chairmen alongside the late Essumejahene, Oduro Numapau, one would have thought that he was a 'born again' but, since 1996 that he took the mantle of leadership of the EC, his performance has not been quite above average except for the international community who still regard him as a gem. He has always been the rejected 'prophet' at home.

The devilish and evil course he wrongly chose was pregnant with Jezebel's mindset and his actions/inactions could have plunged the whole country in an inferno, Indonesian tsunami, Kenya or Cote d'Ivoire.

His penchant arrogance was climaxed by saying that any dissatisfied Ghanaian who was not happy with the results, could go to hell and burn the Gulf of Guinea. Huh, was he under the influence of alcohol or what, one may dare ask? Or was it because he wanted to please his former pal, campus colleague and bedfellow, the late Prof. John Mills as a result of old-boyism?

If so, then he has rather stabbed himself in the back. But wait a minute! This infantile action of yours, whether deliberate, inadvertent, coercion or forced to press the shameful trigger has ultimately shot your status from the unmatched pedigree to the bare ground to become a snowball. You decided to spoil the tasty meal of Ghanaians' 2012 Xmas festivities with venomous bile. As a result, your name would forever continue to remain a stigma and taboo in many households.

The collective collision course that you and JM crafted before, during and after the elections, have indeed brought your reputation from grace to grass and, virtually, nothing could be done by you now to conjure any magic wand to change your lost and faded pedigree.

THE TALE
A story is told of a boy who grew up to become a very notorious person in his youthful age. This naughty boy was more often than not, recognized as a villain of the peace rather than anything else in his locality. Virtually, there was nothing his parents could do to caution him.

There were such types of boys/girls in the student days at various schools and readers could bear with me the type of persons in mind. Hope your guess would be as good as mine – without any exaggeration and/or mincing of words, those who are not full-blooded …... hope you get what I mean.

No amount of plea or representation by the parents could suffice and satisfy the police; mind you, it was not the Ghana police you know that you could bulldoze your way through, otherwise, they would have had a leeway. The biological parents became so desperate and disillusioned in life that if they had the chance or choice, would have disowned him but fate would not have it.

It was time for this poor to be arraigned before court for determination of his pending case that he had already been involved in. The date was set for hearing and the boy was sent to the court in handcuffs. After a couple of cases heard and the third adjourned, it was the turn of this villain of the peace.

The judge read a few lines of the prosecution docket and asked the prosecutor to go ahead with his submission. Then rose up this bulky faced prosecutor; after some heavy sigh of relief, he read through and with some huge voluminous voice, started with the narration of the events that warranted the boy's trial in the dock.

GENESIS
The whole court room was as quite as a cemetery. After some minutes of reading to give credence to the genesis of the case, then came the turn of the judge to ponder over the charge(s) before pronouncing sentence. As if by design or accident, before one could say, Jack, this youngman begged for permission to have word with the mother who was right there at the court and seated some few meters away from the dock. Permission was granted him and when the unassuming, innocent looking mother drew near the son, he asked the mum to come closer so that nobody would hear what he was going to tell her. Mummy unhesitatingly agreed to the son's request. He again beckoned on her to place her ear to the mouth so that nobody would hear even his whisper.

The request was obliged and before the boy would talk to the mother's ear, intentionally bit off the ear to the chagrin of the judge, the officials and the spectators that had gathered for that day's hearing. Soon after, the bewildered judge sitting in court wanted to know why the body had again misbehaved in such an unruly manner. His answer was however simple.

He went on to say, 'My Lord, I intentionally bit off my mum's ear for the whole court to know that my parents and for that matter, my mother, who was very many times with me in the home, was the cause; she could have done me a favour to discipline me even to the point of using cane on me or flurry of insults, but not.

The present predicament that I find myself in was by nobody's fault but my mother's. I politely requested your permission to have the last minute tete-a-tete with her to teach her a lesson that she was the cause of all my woes before you passed judgment. My Lord, my undeserved action was deliberate and I am however prepared for any jail term that you may deem fit to pronounce. The judge really became dumb-founded and decided to grant him pardon by tampering justice with mercy, despite the mother's bitten ear.

All those known to be dancing under this canopy of shame would obviously be called to stand trial before the heavenly throne of judgment. It is my further plea that the bespecta -cled legal luminary in charge of the Women, Children and Gender Affairs would return whatever monetary gains she may have gotten from the defence of her wealthy and rich clients to the Osu Children's Home for their upkeep.


Now is the hour. The hour has struck. This is the time for Dr. Kwadwo Afari Djan to stand up from amongst the crowd to be counted and confess his sins or sinful act committed against Mother Ghana before, during and after the just ended elections. His actions/inactions have marred the beauty and peaceful co-existence of all Ghanaians and foreigners living in this country.

Hypothetically, if I were the embattled Afari Djan, I would not feel ashamed but to muster courage and own up; throw in the towel and quickly send a written plea of remorsefulness to the hierarchy of the Supreme Court of Ghana immediately to show some sign of repentance for forgiveness with the indication that, after sober reflection and with a sullen heart as the man at the centre of the raging controversy, say, “My distinguished Ladyships/Lordships, I have sinned against God, I have sinned against humanity i.e. all Ghanaians; I have been misled. I have been deceived.

I have acted childishly; my hired agents/assigns have let me down woefully, my negligence has caused major havoc without cross-checking the correct facts and figures the subordinate officers from the 10 regions submitted to me.

Without the slightest thought of any evil intention and machination, the hurriedly-prepared results were declared. I mistakenly pressed the trigger. I forgot that the ultimate consequences could have plunged the whole country into war but the gun never fired.

Never did I realize anywhere that the election results that I childishly pronounced in haste would be contested in the courts on the premise of falsification of figures and fraud, hence the bluff that any dissatisfied party could go to court. In the mighty name of the Almighty, please pardon me and tamper justice with mercy to set an example with this humble confession to be a judicial landmark throughout the world”.

The figures that the Plaintiffs/ Contestants have in their possession, copies of which have been submitted to you to be tendered as exhibits in the court, are truly the genuinely authenticated ones. After this disclosure, and from a repentant heart, do hereby entreat you to pronounce the verdict in favour of the Plaintiffs and their party as real winners of the elections.

If he is able to do that openly and publicly for the work of the SC to be made lighter for them, all the angelic hosts in heaven will be glad that he did that to enable his family win favour from God like Noah of old.

FOOD FOR THOUGHT
True or false? It is alleged that the wives of soldiers with allegiance to the NDC at Burma Camp were offered some Gh₵40,000.00 for 2012 Xmas festivities whilst Ghanaian doctors still moan for the migration and actualization of their salaries onto the SSSS?