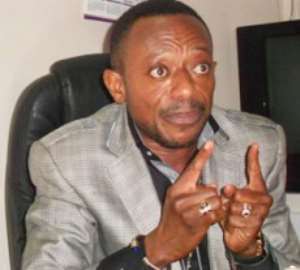 My soul is sorrowful onto death for Rev. Prophet Owusu Bempah. I have been listening to his radio explanations about the seeming controversial prophesy on the calamity awaiting President John Mahama this year. If indeed his prophesy is true and is from God as claimed, which I believe it is, then he should heed my underlying admonition to him.

1. For all the doubting Thomases to believe and take him serious, his alleged prophesy as revealed to him by God must happen. He should stop his church members from any already engaged intercessory prayer with God aimed at averting the death looming upon President Mahama this year.

2. What will profit Prophet Owusu Bempah to see President Mahama die this year, one may ask? He will gain nothing, but pain and sorrow. This is the very reason why he has come out publicly with the vision revealed to him by God. This is against the backdrop of his previous bitter experiences where mischievous persons raised barriers against him.

They intentionally callously prevented him from approaching former President Mills and Vice President Aliu Mahama, to deliver similar prophetic messages. Those then close to the late President Mills obstructed him from delivering the revelation to him for their probably selfish intents. In the end, both persons died.

3. To avoid a preventable death happening, he has informed President John Mahama of what awaits him via the public media. It is now the President's choice to make.

As God reveals to redeem, but one must first have faith and take to certain steps and directions as may be prescribed, I believe Prophet Owusu Bempah has completed his task.

The ball is now in the court of President Mahama. He may choose to visit the Man of God for directions or he can choose to go with the likes of Bishop Agyin-Asare and Archbishop Duncan Williams who are castigating him for his prophesy. The bible says it is by faith that man shall be saved. The onus of the burden is now on President Mahama, how he evaluates the situation is his own problem.

4. Much as most Ghanaians hate the truth but adore lies and evil, I will advise Prophet Owusu Bempah not to wear himself out on the misdeeds of his fellow but hypocrite Men of God. He said on the radio that when he made known a similar death prophesy to Archbishop Duncan Williams, he believed him. The Archbishop appealed to him to pray to God on his behalf to avert the death.

For playing dirty stomach politics, some Men of God have become economical with the truth. They do not want their fellows to partake the cake the NDC are having and voraciously gulping down their esophagus like a starving person at the same time.

I am tired and feeling very sleepy so I will end here but not without telling Prophet Owusu Bempah and President Mahama that, "A word to the wise is enough"