On Prophets and Elections:The Prophecy that seemed both Nana Addo and John Mahama. 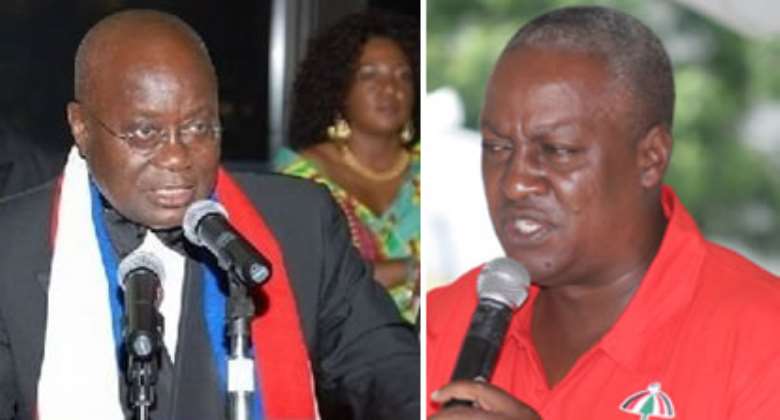 Prophets are the mediums between God and His people. In the Bible, there were so many of them, men distinguished from their fellow men by God Himself, gifted with the ability to see into the future and hear God's voice-directly. Their duty is simple and their abilities are granted them so that they can deliver His message to His people no matter how bitter or sweet it is.

Prophets don't work in a 'margin of error' medium; if they make a prediction it is deemed as the word of God Himself and must come to pass at all cost. The Bible makes us understand per Deuteronomy

18:21-22 that the test of a true prophet is that his predictions must come true.

The work of a prophet isn't a rosy one, consider someone like Jeremiah, his biography would read something like this 'Jeremiah attacked by his own brothers, beaten and put into the stocks by a priest and false prophets, imprisoned by the king, threatened with death, thrown into a cistern by Judah's officials, and opposed by a false prophet- eventually freed and brought to some comfort by a beneficiary of his prophesy-NEBUCHENIZER.'

His, wasn't a lone story, several other prophets like Samuel, Elisha, Elijah, Ezekiel all had to suffer hardships because of the message of God to His people that they had to deliver. And more importantly because they had to make public predictions which didn't always appeal to all people in high places. Prophets like Jeremiah suffered all these hardships simply because the messages they had to deliver in their times, were messages that were bitter to the ears of those in authority.

A few weeks to last year's elections, a school of prophets, headed by Prophet Elisha Salifu Amoako, came out to say that God had revealed the results of the elections to them and that they had written a letter to the candidate who was eventually going to win the elections congratulating him. This prediction of a sort, fell short of telling Ghanaians who God's choice was or even why God had chosen that person (not that the latter really matters).

Looking at the situation that we currently find ourselves in, where the NPP has proven to all who care to know that the elections were rigged in the favor of the incumbent, I wonder what the prophets really saw. My mind is bothered by so many questions,which begs to be answered.

1.Did they see John Mahama or Nana Addo?
2.If they saw John Mahama, are they saying God's choice had to rig the elections to win?

3. If they saw Nana Addo, are they saying a man,an ordinary man, could work to prevent God's choice from taking his rightful positions?

4. Why were they afraid to tell the whole nation back then who really was going to win the elections as revealed to them?

5. Why can't they publish copies of the letter(s) they claim to have sent to the 'chosen' leader?

These questions when answered might perchance save us from the looming crisis I foresee.METHINKS.

Besides the above questions, it is also becoming very obvious that our prophets are becoming pathetically politically correct. It beats my mind why and how in the face of the obvious moral depravity that confronts our nation, from acts of blatant injustice to gross corruption committed with impunity, our prophets live so comfortably making us believe that God has shut His eyes and ears to all these things. It is amazingly shocking that these prophets would dine and wine with these corrupt elements in our society and actually bless them with long life and much success and for what? Diplomatic passports and airport courtesies! Made arrogant by their links to these sinful, immoral people who pollute our political space they drive about in cars and live in huge mansions while the majority of their flock, fleeced of every single hide that covers their poor pathetic skins perished in shameful poverty. Yes, they might be true prophets, but I do remember the story of 2 Chro6\nicles 18 where a lying spirit clouded the judgement of the Prophets of Israel. The same can be true of our prophets. The same is true of our prophets.

More trouble for Weija residents as more volumes yet to be s...
56 minutes ago