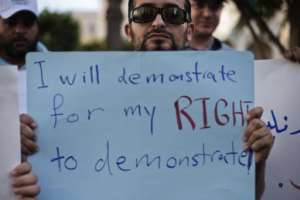 LONDON (AFP) - The Arab Spring has given way to new governments that are failing to respect basic rights such as freedom of expression, Human Rights Watch warned as it published its annual report Thursday.

The US-based group urged the young Islamist regimes of countries such as Egypt, Libya and Tunisia to build "genuine" democracies, saying that even democratically-elected governments did not have a mandate to ignore human rights.

"It's been two years now, almost to the day, since the euphoria of those early days when we saw dictator after dictator toppling in the Middle East and North Africa," HRW's executive director Kenneth Roth told reporters in London.

"That early euphoria has given way to often despair and deep concern over what turned out to be a much more difficult situation than many perhaps had hoped."

He added: "It turns out, in fact, the toppling of a dictator may have been the easy part. The difficult part is replacing that repressive regime with a rights-respecting democracy."

Roth said the Arab Spring had seen "the rise of Islamist parties in particular who threaten to use religion to suppress the rights of women or dissidents or minorities".

Freedom of expression is being heavily restricted under several new governments in the region, including Egypt, he warned.

The campaign group expressed numerous concerns over Egypt's new constitution, saying it contained "defects" with regard to women's rights, freedom of expression, freedom of religion and civilian oversight of the army.

Ultimately, Roth said, it is up to the region's governments to build a brighter future for their citizens than the dictators they replaced.

"Treacherous as the path ahead is, it is simply wrong to consign people to the grim future of authoritarian rule and repression."