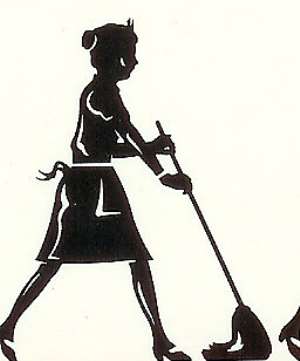 CORPSES ARE TREATED WITH MORE RESPECT than Housemaids and house- Keepers or domestic workers in Ghana. And, that is not an exaggeration.

Yes, the tears of our Ghanaian House- Servants have contaminated our land, but we hardly talk about it.

The ill-treatment the house- girls or house -keepers, drivers, cooks, gatemen and gardeners go through in the homes of the elites across Ghana each day is enough for the prayers of Ghanaians not to be answered by God for two decades.

Baby , a twenty-something year old lady, is an embodiment of an ideal young lady. She has a heart like gold, brain like a computer and very traffic-stopping beauty that matches her gravity-defying back and a pair of Tina Turner's legs. But, there is more to her story than physical attributes. I don't think I have met anyone with enough self-assurance than her. However, after hearing the story about her self-confidence and resilience I began to understand the source of her energy and hope in life.

Her amazing story started when she was about nine years old. She had seven other younger siblings when she was growing up. So her parents decided to send her to one of her 'distant uncles' , with the hope that she could get a better life and good education at her uncle's home. The uncle was a lawyer and the wife was a trained teacher. But unfortunately, she had to take care of a baby while the other kids in the house attended school.

One day when Baby was late preparing the evening meal her uncle's wife came home and confronted her bitterly. She rained insults on Baby and pushed Baby because she claimed Baby stuck her tongue out while she was talking to her .She abused her by stripping off most of her clothes, put her on choke- hold and slammed her tinny body against the kitchen wall. Through some kind of miracles, she was able to escape and run-down to a house in the outskirt of the town to wait for help. She escaped from the house to fend for herself by selling things on the street of Accra, so as to enable to help her parents to raise her younger siblings she left at home. After wasting 10 years of her life, with no education and literally raising someone's kids by cleaning and cooking, she left with nothing to hold on to but hope against hope.

The story repeats itself all across Ghana, but no one gives a damn because the three core pillars that hold any human dignity in any society together have failed us miserably---our ethical, religious and legal institutions have been decimated to the point of losing their importance. There is virtually no morality in our religion. There is no ethic guiding our behaviors .There is no enforcement of our laws. Basically, everything goes—we live in a dog-eats–dog, no- holds barred, take –no-prisoners nation. No wonder Ghana has more churches than schools but we still have more than enough immoral problems to deal with because Ghanaians' prayers are hardly answered!

Is there anyone out there in Ghana who doesn't know at least one house -keeper, maid, a house- girl, personal driver, gardener or a cook or someone lower in status who has been ill-treated by the people they worked for?

All across Ghana, there are so many young, helpless and hopeless people who are daily ill-treated by their guardians or bosses for just a minor infringement. Some of these abuses are so institutionalized that we don't see them for what they are. How can one ascertain an ill-treatment of a maid when she doesn't tell you and lives in a mansion at East –Legon? Most house- girls have no voice. The typical young maid or house-girl in Ghana is from poor home, comes from a rural area and probably an orphan or a JHS drop-out with no hope for the future.

In some elites' and affluent homes many privileged children grew up to observe their parents and other adults treat house girls or servants like sub-humans. The sad part is that some of these children even naively participated in such inhuman treatment .In many affluent homes across the land you could identify the 'house- girl' by the way she dresses, even when the family is out in public. When the parents speak to their kids, the tone they use reveals who is their biological child and who is the house girl.

My mom was right, “our greatness and humanity are not measured by the way we treat those who are rich ,influential and useful but, the way we treat little people below us who are helpless, hopeless and weak”. Paradoxically, often those we consider helpless, useless and beneath us are the most influential people in our lives.

Growing up in a rural area, I was not fortunate to be carted for by a house servant, but bad stories about house –servants and their madams abound. It's no secret that house servants are the ones who cook for the affluent families, wash their clothes, drive the kids around and take care of their children. If they don't deserve a medal made from any metal, no one does! In short, they deserve better treatment than members of the high society .Isn't it insane to show contempt to people who are an integral part of our personal lives and wellbeing when they flounder a little bit just as any human being?

Amazingly—and I don't know if it's a Divine plan or just the law of nature—the children who grew up in an affluent household and participated in abusing a servant normally don't have a bright future. All the worldly toys they acquired cannot buy their happiness when they grow up. In fact, most of them turn out worse later in life when they are confronted with life's little challenges far less than the challenges their house -helper succeeded in overcoming as minor.

Unfortunately, some affluent homes accord their dogs or pets more humane treatment than they give to their domestic servants. They don't eat at the same dining table or share the same privileges but, they forget that the lives of their families are in the hands of house helpers.

Ironically, we're wailing and keening everyday over what we depict as finding a way to change politicians because we don't like the way they treat us. Most of these complaints are coming loudly from the affluent families, who don't want to lose the livelihoods they have envisioned. Amazingly, they're also the ones who can afford live-in servants and all the luxury trimmings life can offer. They're also the cause of the major part of the house- helpers' tears, heartaches and misery.

Some of the abuses are criminal in nature; such as dipping of the victim's body part into hot liquid, physical beating, or even rape. Where and who do these poor house- helpers run to for safety and report their ordeals? Going back to their villages is not an easy option, and staying on is like staring death in the face every time their bosses and mistresses are around them. Should we as a civic society set up desk at social services offices to enable servants to report incidences of abuse, or call a helpline for advice so they don't just run from danger for their dear lives but, through an advocate to receive some compensation for services they render?

My question is this: Having misplaced priorities as a nation with integrity and empathy impaired society, will our society and the communities deal with this issue at all on a national level? Your answer is as good as mine! Unfortunately, the context of the stories behind the house- servants engagement and its social ramifications make it very difficult for one to push hard the pedal on the legal remedies stated above, so that leaves us only a moral appeal to take over. And, that moral appeal corridor is where everything begins to entangle and our moral compass begins to fall apart.

However, once upon a time kindness, goodness, empathy, love and all the good principles of life were contagious. In effect, if we want to see any real change from our superiors (or even from our house- helpers) it should start from us. If you want good and level –headed leaders and citizens we have to treat those beneath us with respect. So watch the way you treat people of whom life has treated with disrespect and who are not fortunate like you. This should start from your work arena— your employees, customers or clients deserve better treatment than the lousy one you give them.

A good Customer Service can be a right step in a right direction. A warm thank-you to express your genuine appreciation can be an effective emotional tool for someone who has a bad day. Remember, except blood donors, everyone who makes a living in an old- fashioned way is selling 'something' to the public. So let's be nice to one another because we're all here just for a while….there is no need to be responsible for someone's tears or misery! Sow a good seed in someone's heart, perhaps you or your offspring will reap a good harvest one day when you least expected.

Decades of unrestrained institutionalization of corruption, accelerating of injustice, disappearing of cultural custodians and deepening self- deceit have impaired our moral core and the society's immune system to fight any immoral diseases. But where do we go from here as a society if we failed to inoculate ourselves against arrogance, hate, resentment, greed, distain, skepticism, apathy and inequality?

These are my perspectives; take them or leave them, but I know there are tremendous repercussions down the road for us if we continue treating people beneath us or work for us like garbage. The answer rests within you so make it happen!!

Kwaku Adu-Gyamfi (Voice of Reason)
Ghana.
*The author is a social commentator.