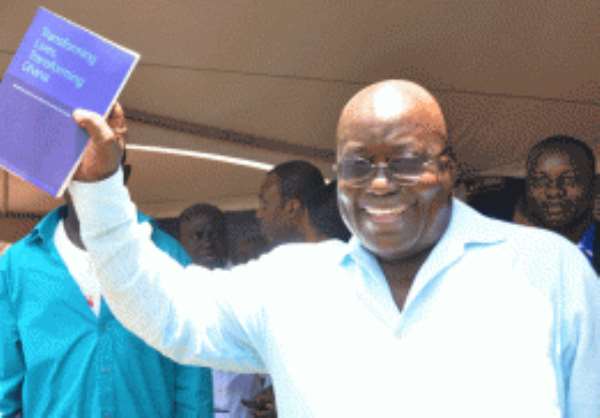 This is in response to story which appeared on Ghana web on Thursday 27 September 2012, captioned: Caveat: Let me asseverate that this write-up is not as a result of political proclivity, but I am rather seeking to expound on the intricacies of the 'men of God' and their antipathetic interpretations of Christianity.

Al-Hajj newspaper pertinaciously carried the story: “Activists, functionaries and sympathizers of Ghana's opposition New Patriotic Party (NPP) would have to brace themselves for yet another painful and disastrous verdict in the upcoming December polls, if predictions by powerful men of God should come true”.

“What I told you some time ago about the defeat of the NPP presidential candidate, Nana Akufo Addo is still very valid, indeed, it's as strong as the rock”, “Sheikh Mallam Musah told The Al-Hajj in an exclusive interaction last week”.

“According to the respected Sheik, since Nana Addo is not spiritually bestowed to lead this nation at this time, the NPP flag bearer must voluntary agree to step aside to allow those spiritually endowed, who carry the mantle of leadership spiritually from God, to lead the NPP to victory in 2012”.

“Only last week, the General Overseer of Alive Chapel International and President of the National Prophetic and Apostolic Churches Council of Ghana, Bishop Elisha Salifu Amoako told Adom News that they are already aware of the winner of the this year's presidential elections even before they are conducted on December 7th”.

“The General Overseer however declined to mention the name of the winner save to say, the group had already written to inform the yet to be declared winner of the December elections”.

I must admit, wonderful works are being done by the so-called men of God, in the name of Jehovah God to the puzzlement of their followers, but are those miracles really from God? Let us look at Mathew 7:17-“Even so every good tree bringeth forth good fruit; but a corrupt tree bringeth forth evil fruit”. Mat 7:18 A good tree cannot bring forth evil fruit, neither can a corrupt tree bring forth good fruit. Mat 7:19 Every tree that bringeth not forth good fruit is hewn down, and cast into the fire. Mat 7:20- Therefore by their fruits ye shall know them. Mat 7:21- Not every one that saith unto me, Lord, Lord, shall enter into the kingdom of heaven; but he that doeth the will of my Father which is in heaven. Mat 7:22- Many will say to me in that day, Lord, Lord, have we not prophesied in thy name? and in thy name have cast out devils? and in thy name done many wonderful works? Mat 7:23- And then will I profess unto them, I never knew you: depart from me, ye that work iniquity [lawlessness].

It is true that the so-called men of God are numerous and very successful, but does this mean they have been blessed by Jehovah God and therefore everything they say is from God? Let us again look at the following verses from the New Testament; Mathew 24:11; and many false prophets shall rise, and shall deceive many. Mat 24:12- And because iniquity [lawlessness] shall abound, the love of many shall wax cold. 2 Pet 2:1 [NIV] But there were also false prophets among the people, just as there will be false teachers among you. They will secretly introduce destructive heresies, even denying the sovereign Lord who bought them--bringing swift destruction on themselves. 2 Pet 2:2 [NIV] Many will follow their shameful ways and will bring the way of truth into disrepute. 2 Pet 2:3 [NIV] - In their greed these teachers will exploit you with stories they have made up. Their condemnation has long been hanging over them, and their destruction has not been sleeping. 1 John 4:1 Beloved, believes not every spirit, but try the spirits whether they are of God: because many false prophets are gone out into the world.

The vast majority of truth seekers are following miracles instead of the truth, hence being swindled by so-called men of God. If we look at the following verses from the New Testament, we will acknowledge that they illuminate the false prophets amongst us. 2 Tim 4:2 [NIV]; Preach the Word; be prepared in season and out of season; correct, rebuke and encourage--with great patience and careful instruction. 2 Tim 4:3- For the time will come when men will not put up with sound doctrine. Instead, to suit their own desires, they will gather around them a great number of teachers to say what their itching ears want to hear. 2 Tim 4:4- They will turn their ears away from the truth and turn aside to myths.

True Prophets Are Always In agreement With Other Prophets Of God And Scripture: 1 Cor 14:32- And the spirits of the prophets are subject to the prophets. 1 Cor 14:37 If any man think himself to be a prophet, or spiritual, let him acknowledge that the things that I write unto you are the commandments of the Lord.

False Prophets can sometimes perform Impressive Miracles That deceive their followers: Mat 24:24- For there shall arise false Christs, and false prophets, and shall show great signs and wonders; insomuch that, if it were possible, they shall deceive the very elect. Mark 13:22- For false Christs and false prophets shall rise, and shall show signs and wonders, to seduce, if it were possible, even the elect. Rev 13:11- And I beheld another beast coming up out of the earth; and he had two horns like a lamb, and he spake as a dragon. Rev 13:12 And he exerciseth all the power of the first beast before him, and causeth the earth and them which dwell therein to worship the first beast, whose deadly wound was healed. Rev 13:13- And he doeth great wonders, so that he maketh fire come down from heaven on the earth in the sight of men, Rev 13:14 And deceiveth them that dwell on the earth by the means of those miracles which he had power to do in the sight of the beast; saying to them that dwell on the earth, that they should make an image to the beast, which had the wound by a sword, and did live. Rev 16:13- And I saw three unclean spirits like frogs come out of the mouth of the dragon, and out of the mouth of the beast, and out of the mouth of the false prophet. Rev 16:14- For they are the spirits of devils, working miracles, which go forth unto the kings of the earth and of the whole world, to gather them to the battle of that great day of God Almighty. Rev 19:20 And the beast was taken, and with him the false prophet that wrought miracles before him, with which he deceived them that had received the mark of the beast, and them that worshipped his image. These both were cast alive into a lake of fire burning with brimstone.

Let me remind the truth seekers once again to exercise circumspection in their quest to find the truth. The prudent line of action is to read the Bible ceaselessly and avoid relying solely on charlatans. It is also true that in as much as the diddling of False Prophets persists, uncritical citizens will forever remain victims to flimflammeries. I think it is about time we stopped the necromantic mountebanks who are using the “Bible” to cozen their followers.

Stiffer sanctions needed to punish persons who engage in tax...
49 minutes ago