Nii Lantey Vanderpuye Should Be Tried For Treason 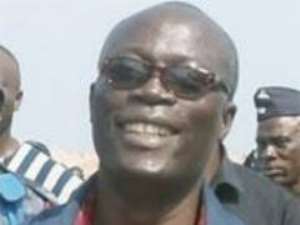 In Plato's republic, it is the cream of the society that gets to steer the ship of state. The process is purely based on merit and ability designed to select people who are competent and speak with the language of poetry to govern. Of course, it is also known as elitism in our time. Socrates, whose ideas Plato synthesised into his magnum opus, hated democracy to the extent that he willingly drunk the Macedonian hemlock, rather than grovel before the democratic mob, which came on top during their internecine struggle for domination. Though, he could have been pardoned if he had renounced his position, nonetheless, so strong were his beliefs he didn't, but chose to die. He felt democracy is a government of the mob, and it only produces leaders who simply know how to get votes. In other words the incompetent gets to rule, which is detrimental to the interest of the state. Before I proceed I will have to make my position clear. I do not object to democracy in any reasonable sense of the word, but I am only taking a swipe at its limitations, which perhaps, can help us to choose better leaders.

Now, regardless of over two millennia of distillation and purification, democracy still carries quite a few baggage that in the past led to the fatal clash between Socrates and the supporters of democracy. The fear of Socrates, which was reinforced by Plato, still plagues modern democracy. I am torturing you with this cue, because of what I read three days ago when I was randomly browsing some of the popular Ghanaian websites. It is a bizarre piece entitled 'I Organized 'Attack' On Prez Mills' Convoy - Nii Lantey Vanderpuye' at the Peace FM website . The following is the link if you care to find out: http://elections.peacefmonline.com/politics/201207/126738.php It is a report about Nii Lantey's comments on a current affairs national TV programme christened 'Talking Point', which according to him he masterminded a road block to force the President to do otherwise. He was trying to animate the magnanimity of the late President, and he couldn't get any instance than this rather ghastly example. If this is not a mob rule then I don't know what it is. The very kind of behaviour Socrates was diametrically opposed to. To say that I was stunned after reading it is understatement. I couldn't stop asking myself the question how could a thug like that with this thuggery instincts get so close to the seat of government.

Apart from Nkrumah who experienced numerous deadly attacks on his person almost, all our leaders have ruled without any credible form of attempt on their lives. The fact that it has never happen doesn't mean that it will never happen. There is always the first time. With the sort of uncouth language that constantly dribbles out of the lips of our various politicians it will not be too long before some lunatic takes the law into his own hands. And I was surprised that a person who can feel the heart beat of the government will set such a horrendous precedence, and have the temerity to insult the intelligence of Ghanaians by divulging it on national television. I can not fathom what he was thinking whether he thought we were going to laugh and give him a medal for such conspiratorial shenanigans.

Selecting a president is a costly process, besides the monetary aspects, there are those who pump into it time and emotional investment. Once a president is elected he becomes the embodiment of our sovereignty. Any harm that comes to a sitting president is as bad as a breach of our sovereignty. And that is why the President has a comprehensive security detail. Every move or stop is subject to security check to eliminate any possible threat to his person. For a person who should know better, organising some ruffians to mount a road block to get the President to do their bidding is certainly tantamount to treason. It is an ambush. It could have gone wrong, which would have endangered the life of the President. What sort of lesson has he left in the minds of these gullible town folks? The human mind is very resourceful, and once it is accorded an inch it will not be too long before a yard is taken. And you don't steer it on the road of corruption.

As I brooded over this macabre antics what clicked was the infamous incident at Odododiodoo, which led to a political fall out that griped the nation for weeks. When the Agyapong saga erupted with the fury of an active volcano many were those who tried to make sense of that unfortunate outburst. Quite a few writers were very blunt as to the root cause of the Honourable Parliamentarian for Assin North indiscretion. Though, Ms Owusu, the lady behind Agyapong's unfortunate error of judgment, categorically accused Nii Lantey Vanderpuye of organising 'macho men' to attack her I was sceptical, and therefore prepared to give him the benefit of the doubt, but by his own admission of such underhand tactics it is very logical to conclude that the allegation brought against him is valid. Circumstantial evidence doesn't come better than this. His confession of this deliberate gangster world of vile indiscretion is full of anecdotes. If he can organise attacks on the President what prevents him from organising some unscrupulous musclemen to teach Ursula Owusu some few realities of life. You can then equally extrapolate, if he can do this to his own ruling party president, which he works tirelessly to promote his agenda, can you imagine what his warped mind would have come up with had it been an opposition president?

The immaturity of some of our politicians is a source of embarrassment. They speak and you cringe; and for some, you want to vanish into thin air. For Nii Lantey's behaviour, some will conclude that it was a moment of bad decision, and there was no blood on the floor. They will pitch that to err is human. That is right. However, one mistake can be pardoned, but not when a pattern is established. To think of it, what is the guarantee that it will not happen again. Now, this is what he thinks is alright to share with all Ghanaians, can you imagine what his twisted discretionary mind will find abhorrent to disclose.

Nii Lantey Vanderpuye epitomises what a lot of people hate about democracy. I submit that he should be tried for treason, because it is the heart of the nation he toyed with. The fact that he admitted the President knew there and then that he was the culprit, and tried to call him on the phone, and he did not respond tells me that he knew what he was doing. There are a whole lot of irregularities that beset out body politics that we are wrestling to stamp out. However, violence shouldn't be one of them.