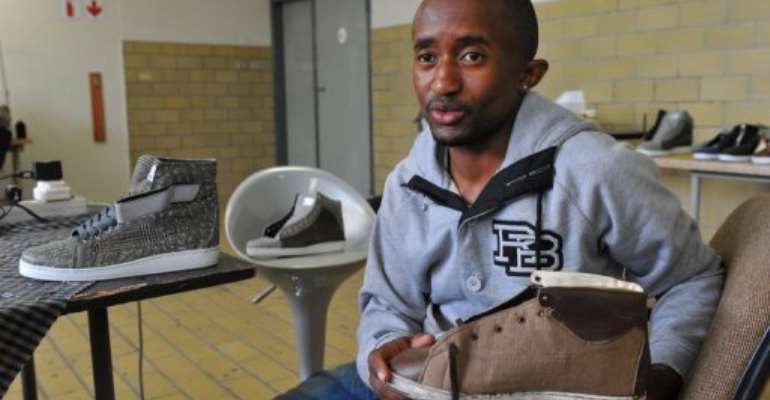 JOHANNESBURG (AFP) - Johannesburg hipster Sifiso Dlamini turned his passion for sneakers into a small business, but like many South African entrepreneurs, he's battling to find financing to expand.

For six years, he's followed his heart's passion in making trendy sneakers that are a hip-hop staple.

"We take our time and make sure that everything is put together," he said in his workshop filled with spools of thread, pots of glue and scraps of leather, the 24-year-old said.

"It's more resistant, lasts longer," he said of his shoes. "I would say it's magic."

His clients are largely fashionistas from Soweto, the Johannesburg township that styles itself as the epicentre of South African pop culture.

Orders are coming in, but Dlamini can't keep up. He works hard, but he only has two sewing machines and two assistants who earn 2,000 rands a month.

He certainly can't afford to open even a small shop in downtown Johannesburg, the stomping ground for the city's creative types.

"Obviously I need capital to buy machines. I think people don't want to believe in this business because it is too small. They just want to see if we are making a profit," he said.

"People like Sifiso, there are hundreds of thousands (of them) in South Africa," said Lumkile Mondi, chief economist at the Industrial Development Corporation, which helps businesses with loans of the million-rand scale.

"They don't have capital and it's a problem. So you finance yourself by your family until you make money. So, except if you have an affluent family, it's difficult," he said.

The irony is that South African corporations are sitting on cash reserves of more than 500 million rand, even though interest rates are at 30-year lows, rather than invest in new businesses.

Business leaders blame the uncertain global outlook, and Mondi said South African companies are only willing to take a chance on new ventures in technology or financial services.

Government has tried to step in, creating the new Small Enterprise Finance Agency in April, with 1.4 billion rand in funding to loan to small businesses over the next three years.

"Government has done its part, but people don't know about the institutions" created to help them start up businesses, Mondi said.

And when entrepreneurs approach banks for loans, they often don't know how to speak in the terms that the bankers want to hear -- explaining things like market size or commercial plans, Mondi added.

Small businesses employ an estimated 65 percent of the 13.8 million South Africans who have jobs, and growing small businesses is seen as one way of beating down an unemployment rate mired at around 25 percent.

South Africa has set out a goal to create five million new jobs by 2020, a goal that neither government nor big business could possibly meet, said Clem Sunter, head of the AngloAmerican Chairman's Fund, the mining giant's charitable arm.

"Our goal for 2020 should be to create one million new businesses rather than five million jobs," he said, warning that South Africa needs to stop sitting on the success of its mining past and start embracing new businesses.

"It is the only way to create that number of jobs," he added.

For now, Dlamini is keeping all his receipts to start formally keeping his books. But he's still selling his shoes by word of mouth or on Facebook. He hasn't hired an accountant or started paying taxes.