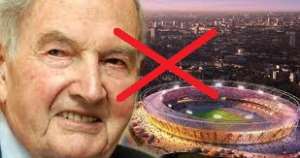 Rockefeller's Dooms Decade: Who Are The Victims?

Rockeffeler For many months, the security situation at the London Olympics became an issue of great concern to the British people, the government and the international community as a whole. Many anticipate that terrorists' attack could mar the beauty of the entire game and put the security of tens of thousands of people at risk. As a result, unprecedented military expenditure has already been exhausted as billions of the taxpayer's money has been spent on security arrangements that aim to prevent any such incidence. The initial budget has thus multiplied in ten folds!

In an article written by Dave Zirin, he states:
“Londoners were first told that the Olympics would cost £2.4 billion. Projections that include ballooning infrastructure costs are now looking at £24 billion, ten times the original bid's estimate". Last year, the Guardian reported that there are 1.85 million CCTVs cameras across Britain, closely monitoring every movement at every corner. In the Article: “Three places to avoid this summer: Kabul, Baghdad and the 2012 London Olympics”, Simon Jenkins, writing for the Guardian, paints the picture of some breath-taking developments around the friendly Olympics games.

“A week-long "military exercise" is currently under way in the capital. RAF Typhoon jets are to scream back and forth over the Thames. Starstreak surface-to-air missile batteries are being set up in East End parks and on flats in Bow, with 10 soldiers manning each one. Army and navy helicopters will clatter back and forth, with snipers hanging from their doors "to shoot down pilots of terrorist planes... Yet, not one defence spokesman has come up with a plausible scenario for the jets and missiles.

Was this an indication that London is expecting terrorists attack at the 2012 games? “For now, it looks as if a noble movement has been hijacked by a monster that is plainly out of control”, the writer concludes.

Shockingly, the Rockefeller Foundation in a remarkable narrative has already confirmed the fears of a terrorist attack at the 2012 games dating back 2010. This places the actual incidence in a historic perspective. As far as this piece of research is concerned, the incidence has already been documented. This seems to suggest that those victims who would be going for the Olympic Games, though currently alive, are already dead.

A small portion of the research document titled: Scenarios for the Future of Technology and International Development, (Page 34) published in May 2010by the Rockefeller Foundation, conveyed the following chilling piece of information:

"...The years 2010 to 2020 were dubbed the 'doom decade' for good reason: the 2012 Olympic bombing, which killed 13,000, was followed closely by an earthquake in Indonesia killing 40,000, a tsunami that almost wiped Nicaragua and the onset of the West China Famine, caused by a once-in-a-millennium drought linked to climate change.

Is this prediction simply hypothetical speculation or could this be a warning regarding a terrorist attack that has been planned for the 2012 games? If this critical scenario about such an important event turns out to be true (just as previous scenarios have been), then it means that about 13,000 people including the fasters men on the planet have already been given their death sentence in advance. This to me is something serious for those people to think about.

Cover page: Which Path to Persia? Published by Brookings Institute 2010
The world can still remember related scenarios such as, the “Project for the New American Century”, a report published in the early 2000 as “projections” by key members of the Bush administration. These were the men who had called for a “New Pearl Harbor” in order to facilitate the authoritarian changes we currently see in America: the Patriot Act, Home Land Security, NDAA, among others. In the end, all those projections came into effect, exactly how it was 'predicted'. Since then, America has never been the same again. Similarly, a document titled: “Which Path to Persia?” a handbook for carrying out regime change across North Africa and the Middle East, was merely written as imaginations or projections. The 156 page report focuses on effecting regime change within Iran, starting with 'unfriendly' regimes which include Syria and Lebanon, with Russia and China being the ultimate target. Today, the events in Libya and Syria and Iran cannot be seen as mere coincidences.

'We can see that the stratagems and methodology defined within this report have played out not only in Iran, but in Libya and Syria as well, with preparations and posturing being made in regards to targets further along China's "String of Pearls" and along Russia's vast borders', writes Tony Cartalucci, editor of the Land Destroyer's Report.

Perhaps the most chilling piece of information to emerge regarding the upcoming Olympics is a prediction made by the BBC itself in August 2008, regarding the Olympics and the coming explosions. A BBC's video documentary, captioned: “Code 9, Predictive Programming”, envisaged a nuclear attack on the London Olympic Stadium. The shocking video depicts how the terrorist attack at the Olympics would look like. The video begins with the following words:

"In the summer of 2012, an event was to occur that would change the United Kingdom forever", a clear reference to the Olympics Games.

In a vivid narrative, the narrator (the BBC) suggests…

"…In bomb terms the blast was relatively small but the death toll wasn't. Over a 100,000 incinerated (burnt) and many more given a death sentence by a nuclear radiation. For some people outside of the blast zone, life continued almost as normal. But after the attack, nothing in our country would ever be the same again"

Predictive Programming - Attack on London in 2012?

Whether or not an attack occurs, we can all be certain of one thing: governments around the world will continue to use the threat of terror to further consolidate their power, and to strip the citizenry of their rights and civil liberties. This agenda was stated at the end of the above video as the media clearly reported, after the supposed incidence:

"...The government has introduced a controversial new security measures, as well as ordering a complete restructure of the security services".

I have a strong conviction that these plots of "terrorist attacks" can be stopped if the people of the world become aware of this piece of information and force those "terrorists" behind the plot to cancel their plans. It will also put responsibility on the security agencies, having received the needed financial support, to prevent this attack from happening at all cost. The world would be better off, if the lives of these 13,000 or over 100,000 men, women and children could be saved from the hands of these terrorists. Everyone must get involve, spread the message and together let us act and prevent this disaster from happening. It is time to join the information campaign.

"May future generations look back on our work and say that these were the men and women who, in a moment of great crisis, stood up to the politicians, the opinion-makers, and the establishment, and saved their country and the world".

Honourable Saka
The author is a regular writer and a political analyst on African affairs, and a well-known social commentator in Africa. He is the editor of “The Doctor's Report”, your most reliable source of critical analysis on African affairs. He is a strong Pan-Africanist, a youth activist and the founder of the “Leaders of Tomorrow”, a transformational and inspirational group of possible future leaders. Please visit his blog at: www.honourablesaka.blogspot.co.uk and reach him by Email at: [email protected]

Feature Article
Powered By Modern Ghana
Final Victory Over Godfatherism In Nigerian Politics
Kwame Nkrumah, Lawmakers, And The Absent Father Syndrome
H.E. Nana Akufo-Addo Why Did You Sit On Depositors' Money Till Many Of Them Suffered And Died Before Paying?
"The Rich Will Continue To Be Richer, And The Poor, Poorer" - Reality Or Myth?
The Limits Of Bullionvanism As An Effective Political Strategy
21st September: We can make the Black Star shine
Otumfuo couldn’t have said it any better: Mahama must show remorse for his errors in judgement!
Witch Persecution And Atheism In Malawi
We Don’t Need To Celebrate Nkrumah, What We Need To Do Is To Practice Nkrumah!
COVID-19 Updates Live Dashboard
TOP STORIES