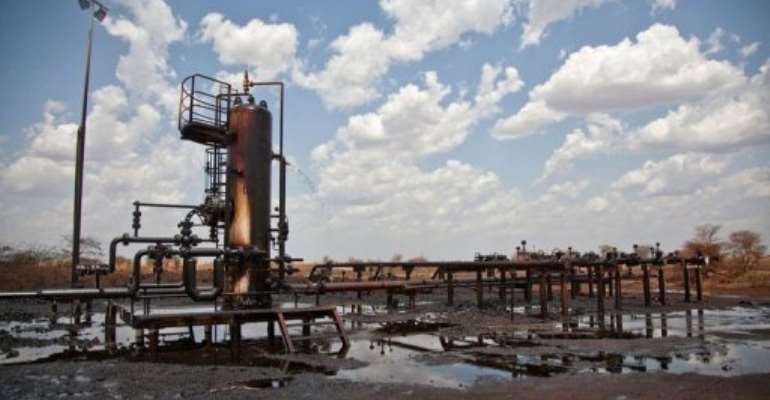 HEGLIG, Sudan (AFP) - The oil pours out of Sudan's damaged pipeline like blood from a severed vein, and no one knows when production from the country's main oil region can resume.

Officials allege South Sudanese who occupied the area for 10 days deliberately damaged the pipeline and an adjacent central processing facility and power plant, leaving them partly blackened and burned, with oil seeping onto the ground.

"It was hit by TNT or, I don't know, something. Explosion," Ibrahim Yousif Gamil, a manager for the Greater Nile Petroleum Operating Company (GNPOC), said of the 28-inch (71 centimetre) line which begins at the damaged plant and runs 1,500 kilometres (930 miles) to the export terminal in Port Sudan.

"We are trying to stop the spillage," he says.

The oil flows onto the ground as if a giant tap has been left open.

Until two days ago, the area was on fire, adds Gamil.

GNPOC is a joint operating company owned 40 percent by China's CNPC and 30 percent by Petronas of Malaysia, according to the company website.

How long will it take to resume production?

The plant's IT system is down, trucks were burned or looted, and even the coveralls are gone, he says, adding: "Now we are working as a team to restore services before production."

Only 120 employees are so far back on the job, out of the more than 4,000 staff and contractors normally in Heglig, Gamil said.

"We are living in one room."

Gamil says he has no estimate of the damage but they are trying to document it.

South Sudan's army alleged during its occupation that Sudan had bombed the Heglig area "indiscriminately" and that an air raid struck a Heglig oil processing facility, setting it ablaze last Thursday.

Analysts said the loss of Heglig production would worsen an economy already in crisis after South Sudan separated last July with about 75 percent of the former united Sudan's oil production and billions of dollars in revenue.

Sudan declared last Friday that its army had forced Southern soldiers out of Heglig. South Sudanese President Salva Kiir had already announced that his troops would leave under "an orderly withdrawal", which they completed on Sunday.

At the oil facility, a giant round storage tank with a capacity of 300,000 barrels was hit by what Gamil described as a rocket propelled grenade.

The tank has three round impact points, each about 30 centimetres (12 inches) across. Below them, a square of metal has been peeled away and oil seeps out as if from a small waterfall.

Damage is not confined to the main oil facility itself but also to support buildings.

On a four-hour government-organised trip to a region normally off-limits to reporters, officials also showed the destroyed Heglig Central Warehouse which stored pipe fittings and other components for the oil plant.

The corrugated metal is twisted and black. Pipes and seals are burned beneath the buckled shelves. The air is acrid.

Outside, a donkey grazes near two sports utility vehicles which have been placed up on blocks with their wheels missing. There are bullet holes in one of the doors.

A group of soldiers sit in the shade, holding a meeting in front of the small GNPOC medical clinic, which has been ransacked.

The wind brings a whiff of rotting corpses -- and from South Sudan there are fears that more war could be imminent.

Asked if he feels safe working in Heglig, Gamil is non-committal.

"I'm working here for 10 years. "There are always risks" and challenges, he says. "We have our evacuation plan."

I planned my fake pregnancy with my mother, I used silicone ...
32 minutes ago