ABUSE OF FREEDOM OF SPEECH 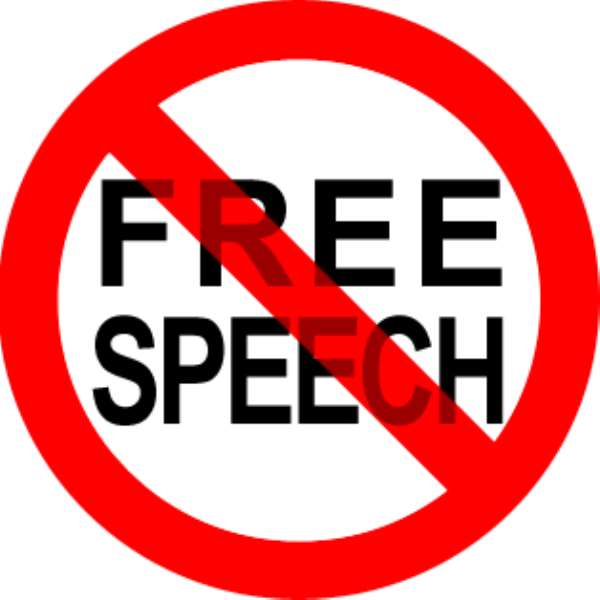 The call by well meaning Ghanaians to both politicians and civil society groups to eschew the avid patronage of foul language most especially in this electioneering year, smirks of wrong self disposition in communication. The aroma to chronicle some few words to shed light on the most battered vocabulary without deeper understanding to most of its users, “Free expression”, is so inviting to resist.

Freedom of speech originated and thrived among the ancient Greeks. Indeed, any society that promotes and ensures the festering of free expression curbs national strife. The Greeks' defined 'Freedom of speech' as expressing what is true and naturally exist. Therefore, in exercising one's natural right to self expression it is enjoined on the fellow to remain fare to his or her self and just to the audience. Hence, to express an idea or opinion which is deficient of truth and lacks natural existence only denigrates reputations and cripples social serenity.

Naturally, no man has been called to a state of quietism. Besides, man as a moral being is said to be free. This same agent is considered as freedom, and freedom is man.

Therefore, man has choices to make in every facet of life. This has been looked as a burden upon man. Nonetheless, in the execution of this free will to act one needs to take in to consideration the teleology of the actions. The exercise of one's right to free expression should not be to the detriment of fellow countrymen.

Recent misguided and empty statements of some country men and women of varied classes of Ghanaian society without an iota of truth laced in there clearly defeat the true meaning of freedom of speech. This nuisance which is gradually creeping into the Ghanaian society with all the boldness should be nabbed in the bud, before we are sank in our own sea of recklessness. Can we be a little cautious, civil and responsible in our utterances?

At the turn of the millennium the Communication expert, Hugo de Beuo, stated “Freedom of expression is all but very well, but for an opinion to be well grounded you need, information, verifiable facts and contrasting views” Therefore, statements made in respect to issues up for discussion, should require commentators and contributors alike to satisfy these three instructive barometers. It is unfortunate the rates at which these regrettable words that hoist the hate flag and hurts sensibilities are spewed with pride, without any display of remorse.

Political parties, most often than not, prefer to opt for their communication team members with a tongue larded with brute sense of language to various fora. These Communicators, whether by accident or design defiantly trample on decorous linguistic in such formal fora. As a people, we can deny, deceive and be a deception to ourselves that all is well with the current state of affairs.

The most disastrous and bizarre of every human society is to create a weapon which turns to destroy itself.

It is a widely accepted view that, in every human society the breath of life is discourse. This definitely requests the use of palatable language which gives life to discussions and refreshing breath to society. Could Social Commentators do the apt opt in their art of word choosing?

The 1992 Constitution has enshrined in it general fundamental freedoms. Article 21 clause 1 (a) and (b) stipulates, “All persons shall have the right to, freedom of speech and expression, which shall include freedom of the press and other media; freedom of thought, conscience and belief, which shall include academic freedom” These freedoms prescribed equally demands for level heads to display high sense of responsibility, though not avidly stated. Thoughts which are aired without any restrictions what so ever due to the grants in the constitution, but has the propensity to polarize society, will amount to the wrong application of a right instrument for illegal purpose. Therefore, one needs to be careful in exercising his or her prescribed freedom which might infringe on the same of others.

Despite the press freedom which has been stipulated in the 1992 constitution in article 162, it will be most unpardonable for the gatekeepers to wrongfully apply this found freedom, and also present the dais for similar violations. Media houses owe it a duty to the people of Ghana to restrain volcanic erupting language from their panelist. Again, they should institute measures which will help them bar vitriolic Commentators from appearing on their networks. This they should not compromise. The agitations which went into prompting the last regime to repeal the criminal libel law should not be treated with disdain.

We need to vehemently advertise and demonstrate the strident discontent, disregard and adherence to the abuse of freedom of speech with the media leading the way. Failure to banish this inflammatory utterances which has crept into our communicative life, will amount to reducing the denomination of responsible language not tenable in a civilised Ghanaian society in the near future.

The false facts that are fed to the Ghanaian population by Politicians who make wild allegations which lack an iota of substance should not be permitted to thrive. If this sticky attitude is not done away with it will soon shove political statements into the bin without any serious perusal.

The true meaning of free speech should be sort in whatever form it may be found to the best of our understanding in order to serve as a guide to both Politicians and Civil Society. This will help stem the tide menace of this lurid communicative art.

As a people one thing we should learn is, he who the gods wish to destroy they first make proud, and he who spit into the air dirties his own face. These same reckless, irresponsible and empty pronouncements plunged Rwanda into one of the goriest history of humanity after the holocaust.

Mistakes of the dead are example for the living.
Patrick Twumasi (0209045931)
[email protected]