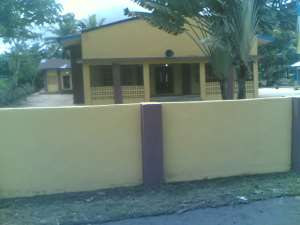 Umuodagu Ntu in Ngor Okpala Local Government Area L.G.A is one of the two parts into which Ntu town is traditionally divided. It is made up of Umuogba, Umuaku, Umuolokoche, Umuokpo and Umuhoko villages. The other part of Ntu is known as Umuneche, and is composed of Umuogbo, Uvuru and Umuhitte village. Umuocham, which is part of Umuneche is predominantly protestant with very few families of Catholics that prefer to worship at Umuodagu Ntu. The traditional division of the town has played a very important role in the sharing of amenities in the town and also in determination of alliances during politics and crises. It is interesting to note that the two sides are now two parishes.

THE INTRODUCTION OF THE CATHOLIC CHURCH: In the early twentieth century the people of Umuodagu Ntu were predominantly idol-worshippers. What was known as Christian Church in the place came into existence early in 1929. It was called the Delta Church. Only very few relatively enlightened persons embraced it.

Later in the same year, one Mr. Ukaulor Asonye married from Umuaga Nguru in Ngor Okpala L.G.A where the Catholic Church was already in existence. Impressed and enthused with what he saw of the church, he came home and summoned young men in the village. He explained to them what he saw and sold the idea of establishing the church in Umuaku. He then led a deputation of young people to Umuaga to request for a Catholic teacher to establish a station in Umuaku Ntu. The deputation consisted of Ukaulor Asonye, Obasi Obikaram, Stephen Nwaorgu, all late. The request was finally granted and one Mr. Micheal Nwagu was sent as a teacher. He established the Catholic Church at Umuaku Ntu inside the compound of one Nwaeke Odu. By then the station, like Umuaga Nguru was under Emekuku Parish. Notable among those who worshipped there were: Dennis Nwoko, Matthias Obikaram, Christian Eshie, Joseph Nwaorgu, Livinus Amadi and Innocent Echebiri.

As years progressed teachers were posted and transferred out. However, they were known as catechetical teachers and they taught catechisms and prayers only; they were also known as station teachers. The name, St. Paul, was given to the station right from the onset. It is pertinent to mention that two Mary League girls of the 1930s and early forties. Namely Miss Maria Nwaorgu and Bernadette Eletuo. They were outstanding and exemplary in character.

THE RELOCATION OF THE CHURCH AND THE EARLY CHRISTIANS: After few years of existence, the population of worshippers increased and could not be contained in the little mud house erected in Pa Nwaeke Odu's premises, the church was relocated to a site in Umuogba Ntu village which was central to all the villages of Umuodagu Ntu. The relocation of the church to a central venue brought about further increase in the population of worshippers.

Prior to the establishment of Mbutu Okohia Parish in 1942 many of our early catholic members had been baptized at Emekuku Parish, and a handful had wedded there. The following were the early faithful who married in church then: Mr. and Mrs. Dennis Onyeuche (1936), Mr. and Mrs. Joseph Nwaorgu (1937), Mr. and Mrs. Christian Eshie (1938), Mr. and Mrs. Silvanus Nwoke, Mr. and Mrs. Matthias Obikaram and Mr. and Mrs. Livinus Amadi, all late.

Of particular mention among the above named couples was the family of Mr. and Mrs. Dennis Onyeuche. Dennis became the God father of most of all that married in church after him and the wife, Agnes, became their God mother. The wife, Agnes, was indeed the spark that kept the Christian women in motion in church affairs. She gave the women all the necessary information on what was expected of them, spearheaded actions and went to the parish centre as often as her strength could carry her. She liaised between the women members and the station teachers and even the parish priest. No wonder, she was the daughter of Chief Gabriel Ekpe, one of the key persons who opened up Mbutu Okohia Parish.

THE CRISES IN NTU TOWN AND ITS IMPACT ON UMUODAGU CATHOLIC CHURCH:

In 1963, an internal crisis broke out in Ntu and tore the town into its two traditional parts. The crisis was of such a proportion and seriousness that the church and schools in Ntu were affected and there was insecurity of life.

The strife rendered impossible, the movement of the faithful from Umuodagu to Mbutu, Okohia Parish Centre as they had to pass through Umuneche before getting to Mbutu Okohia. The alternative route to Mbutu Okohhia which was through Okpala was a long way expensive. The faithful could not attend sacrament as before and some were in danger of falling away from the catholic faith. Our people withdrew all their children who were attending school at Pa Patrick's Central Ntu which was located within Umuneche zone.

The above was the situation that impelled the members of St. Paul's Umuodagu to request His Lordship Bishop JB Whelan to be allowed to join Okpala Parish which was safer for the people. The parish priest at Mbutu Okohia did not take kindly to the request. On 11 April 1964, the Bishop's reply was received granting us the request to join Okpala Parish. The reply came through Rev. Fr. Doheny, the then Parish Priest/Rector of Okpala Seminary. On the same date, Saturday 11/4/1964 Fr. Doheny held the first confession in Umuodagu Station and on the following day 12/4/1964 he said Mass and declared Open to join Okpala Parish. The parishioners hived a sigh of life. Thanks should be given to the following that fought relentlessly to ensure that separation from Mbutu Okohia was a success. They are Mr. Paulinus Nwaorgu, late Mr. Akanabu Augustine, late Mr. Livinus Amadi, late Boniface Agomuo, late Innocent Echebiri, Mr. Vincent Eletuo and Sir. Bonaventure Okere. It is now a self-evident truth that tore Ntu town apart, over the years, has now been resolved and peace restored.

ACQUIRING LAND FOR A CHURCH BUILDING:

Hitherto the church has been worshipping in a mud house, which it shared with the Holy Rosary School which is located in the same premises. At this point in time the population of the church has so increased that the building became so small for the number. In 1974, the Church acquired a piece of land from late Pa Livinus Amadi and Bernard Njoku C. from Umulokoche and Umuogba Ntu respectively. On 8 April 1974, work started on the construction of a new church building. It is the building that is still serving the parish.

The church made tremendous progress under Okpala Parish. The C.M.O and C.W.O members as well as the youths in the church knew no second position in any competition in the parish. They were exemplary. Inspired by the feat so far achieved and the great population some members of the station started to nurse the idea of a separate parish.

Considering the station as qualified for a parish status, members on 3 February 2001, applied to the Archbishop of Owerri, Most Rev. Dr. A.J.V Obinna for separate existence for a parish. The struggle for a parish was by Mr. Augustine Akanabu, Dr. Titus Okere, late Mr. Patrick Ikeagwuonu, late Boniface Ihesiolu and some others. To ensure the success of application, members were asked to start a Rev. Father's House which was embarked upon immediately. By then, Rev Fr.Ononiwu the then Parish Priest of Okpala was directing affairs. On 13 April 2006, St. Paul's Umuodagu was granted a Parish Status by the amiable Archbishop A.J.V Obinna. After date the church still operated under Okpala Parish until the Rev Fr's. House was ready. Mr. Michael Anaele was appointed the Parish Council Chairman.

On 20 February 2007 the church had full autonomy and the first parish priest Rev. Fr .Bethrand Osinachi Ujunwa arrived. He celebrated a thanksgiving mass on 21 February 2007. Being Ash Wednesday.On Sunday, 25th February we celebrated a thanksgiving mass and a reception of the pioneer parish priest. Then Sir Bonaventure Okere was appointed the parish council chairman and comrade Maria Eke the secretary. The C.W.O was manned by an indomitable woman, Mr.Anthonia Amadi who with her then secretary, Mrs. Cecilia Okere saw to the smooth transition from station to parish.

The first parish priest Rev. Fr. Ujunwa is still with us and is someone loved by every member of the church,old and young. His reputation as an ideal and exemplary priest spreads over to our protestant neigbours, some of who occasionally attends his masses and come to him for resolution of their problems. Fr.Ujunwa knows every member of the parish by name. The parish also boasts of an indefatigable catechist by name Mr. Vincent Eletuo who has been in that post for decades. He has been the official catechist of St. Paul's Catholic Church since the end of the civil war, assisted by Mr. Augustine Akanabu. Never to be forgotten is Pa Paullinus Nwaorgu, who has guided the youth right from the forties and early fifties when he was a student of CKC Onitsha. He has never relented in church affairs and is presently the parish C.M.O president and parish treasurer.

At is early stage and in its own way, the church contributed in abolishing the killing of twin babies. It fought and succeeded in destroying idol worship and converted a number of juju priests to Christianity. Educationally, the church established St. Paul's Catholic School Umuodagu where all the children born in Umuodagu acquired early education, though the school was later taken over by the government. The parish, under the present parish priest Rev. Fr. Bethrand Ujunwa has recently established its own Nursery and Primary School which will eventually metamorphose into a bigger institution. Importantly, the church through the current parish priest has been at the forefront in restoring peace among some families' members and villages. Worthy of mention and a case in point was the role played by Rev. Fr.Thomas Agaziem and Rev. Fr. Bethrand Ujunwa in the case that tore Umuaku Ntu Village apart. The church in the recent past, gave thousands of naira to support the less privileged to enable them set up small scale business. It is has become a tradition of the church to take care of the indigent as it provides bags of rice, rappers and cash at end of every year especially during festive periods. The above philanthropic gestures and assistance to the indigent was made possible by friends of Rev. Fr. Bethrand Ujunwa; prominent among is Mr. and Mrs. Emmanuel Agbachi owners of A.O.EMMACO GLOBAL (NIG.) Ltd.

Given the remarkable contributions of the church in the areas of civilization, conflict and dispute resolution, education of children, abolishment of the killing of twins, conversion of idol worshippers to Christians, assistance to the less privilege among others, the sky is not only St. Paul's Catholic Parish Umuodagu Ntu 's limit but its starting point. To God is the glory.

Produced by the elders of the church; assisted by the Parish Priest.