Who Will Deliver Us From This Goodluck? 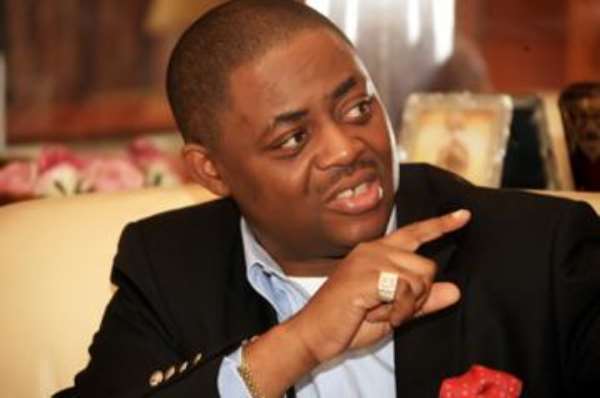 When President Olusegun Obasanjo was in power we spent 300 billion per year on the fuel subsidy. Under the administration of President Goodluck Jonathan it shot up to 1.3 trillion naira in the last one year alone. Can someone please explain to me how it got so high in 4 years and what exactly they were subsidising with the extra one trillion naira? When the Obasanjo government left power in 2007 the country was no longer in debt and the 30 billion dollar foreign debt that Obasanjo met when he came to power in 1999 was fully paid off.

Today, under the administration of Jonathan, our country is back in debt to the tune of 41 billion dollars (both foreign and domestic) and we are still borrowing. Can someone please tell me what the loans were used for and whether we will ever be able to pay them off? When the Obasanjo administration left power in 2007 our foreign reserves were 80 billion dollars even though when he came into office in 1999 we only had 1.5 billion dollars.


Today our foreign reserves have dropped from 80 billion dollars in 2007 to 33 billion dollars. Can someone please tell me where all the money went? When the Obasanjo administration left power in 2007 23 billion dollars was left in the Excess Crude Account after he built it up from nothing in 1999. Today we do not have one dollar left in that account because the money has been squandered and the account scrapped. Can someone explain to me who spent that money and precisely what it was spent on? By the time the Obasanjo administration left power in 2007 not one bomb had gone off in Abuja throughout his 8 years in office and neither did we shy away from confronting the evil and dealing a hard blow to the terrorists wherever and whenever it was necessary to do so. Today bombs go off at will all over the north, the President hides in the Villa and churches were targetted on christmas day in Abuja. When Obasanjo was in power we did not remove the fuel subsidy because it would have caused too much pain to the Nigerian people and because there was no safety net in place to reduce that pain. President Jonathan however did not have any such inhibitions or qualms. Just seven days after we suffered the horrendous trauma of the xmas day bombings and probably as a New Year's Greek gift to the Nigerian people, our President finally removed the oil subsidy.

He did this knowing fully well that it will lead to untold suffering and terrible hardship for the next few years for the Nigerian people, most of whom still live below the poverty line. Can someone please tell me why President Jonathan wants Nigerians to cry? Yesterday he not only said that he would "crush Boko Haram" but he also declared a state of emergency in a few local government areas in some northern states. Can someone please tell me why our President could not do this 6 months ago when some of us first advocated it and thereby save many lives? Why has it taken him so long to find the guts to confront Boko Haram and to lead the fight against them with ruthless zeal, strengh, courage and total faith in God? Why has he done so little when it comes to this matter and why has he done it so late? Does he not know that a king is meant to lead his people into battle and if necessary die for them? He has been unable to handle and contain Boko Haram and now he has removed the fuel subsidy which is something that is expressly against the wishes and interest of the overwhelming majority of the Nigerian people.

Can someone please tell me precisely what has happened to this man and what has got into his head? This government is not only weak, it not only lacks direction but it is also insensitive and callous. The removal of the fuel subsidy is the final straw: President Jonathan, the King Rehoabam of our time, has hardened his heart unto destruction, just like Pharaoh once did, and he has fallen into the trap that has been set for him by God and by his enemies. May the Lord save Nigeria from this mess and from this weak man and may the Nigerian people themselves wake up from their accursed slumber and take their destiny into their own hands. The smell of religious war, sectarian violence, regional and ethnic conflict, insecurity, untold suffering, rampant poverty and economic hardship is in the air. Nigerians are divided as never before and our country is slowly crumbling and dying before our very eyes. Who will save Nigeria? Who will stand up and say enough is enough? Who will pull us back from the brink? Who can we count on to take the bull by the horns and do the right thing? There must be a lawful and democratic change. My God let there be a change.