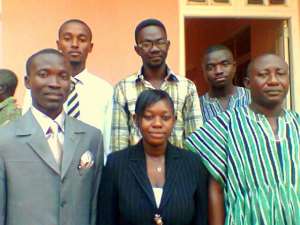 The National Service Personnel Association (NASPA) delegates in the Brong Ahafo Region today December 21, 2011, have designated new sets of personnels for their executive positions for the 2011/2012 national service year.

Out of 110 delegates who were supposed to attend the meeting, 92 turned up to exercise their franchise.

Honourable Osman Aliu John (Organizing Secretary Kintampo North) was elected as the Regional Organizing secretary when he obtained 46 votes over his other two contenders.

The regional director of national service scheme, Mr. A. A. Abubakar Ahmed said in his speech that this batch of executives stand a better chance of performing extraordinarily since the President elect was posted to the municipal with the National Service farm project.

The president elect Hon. Bangdome hinted that the campaign messages of the contenders who could not make it to their intended positions would be considered where necessary in drawing of the action plan. He thanked all delegates and wished them a merry Christmas and prosperous new year.