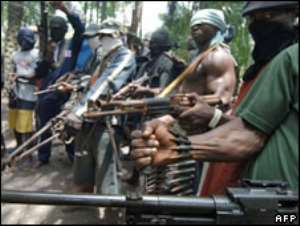 Verily, verily, despite government's presumably tough talk and stance, if Nigeria still has a chance. Only a Sovereign National Conference (SNC) otherwise known as Ethnic Nationalities' Conference (ENC) can save Nigeria. Given that Nigeria was founded on illegal or fraudulent foundation, and the fact that all the different nationalities did not freely discuss and negotiate forming the nation-state, rather imposed on them.

The reality that most Nigerians, considering the culture of oppression championed by a cabal, and deadly conflicts, etc, can not continue to be forced to live under such coerced and repressive circumstances without honest talks.

The aforementioned factors and many that will be discussed below makes a SNC or ENC the Federal government seems to fear, pressing hence the real cure to Nigeria's disease and threats of war. The current semi-conventional warfare, destruction and killing of terroristic magnitude synonymous with the unabated Boko Haram's Northern Islamic sect, and the trading of words to the Boko Haramites by Niger delta militants makes urgent or imperative this conference.

Considering the fact that the disease Nigeria has is foundational and needs no management (else it dies), rather an honest and permanent cure for it to live. The true and holistic cure or panacea (not antidote) to this disease and the peoples' suffering, grievances, national instability and insecurity is, I repeat, a SNC or ENC.

At this long clamored conference, which has repeatedly fallen on the deaf ears of Nigerians in power, all the nationalities that were forced against their wishes to form the country must be present. Any group (s) which may wish to be absent can freely choose.

To avoid unnecessary and deeply divisive conflicts and senseless killing, even a possible second civil war, as the signs are obvious today. The about 300 different nationalities the British colonialists forced into the Nigeria's contraption, will send equal representation freely chosen by their people to a collectively planned conference. This conference should (or could) be sponsored financially by individuals, groups and the federal government, but not influenced by them.

This way Nigeria and Nigerians, will be discussed in earnest, and its entirety and there shall not be any "no go areas" as government-planned and doctored national or constitutional conferences have been restricted.

At the conference, every facet of the country: national interests, unity and security, human rights, and resource control and allocation shall be discussed without reservation. Proper federalism (local autonomy) and democracy, state creation, nation building shall be discussed and resolved. Also to be discussed, according to specifications of international law, is the environment, pollution, revampment and protection-compensation where there is pollution or degradation.

In nutshell, this conference will discuss and negotiate a new Nigeria, which all representatives will agree to, by consensus and not majority vote because even though majority carries the vote as we say in democracy. Not all such majority votes, as we can see in the global politics today are good or in the best interest of the people, but have mostly benefited few rich and powerful in and outside government.

Meanwhile, the conference's representatives shall agree to set up a committee, especially during the conference tenure to draft a new constitution that shall be the Peoples' Constitution, which will take care of their needs or yearnings and aspirations. That is, should the conferees in consultation with their constituencies agree to continue the country, Nigeria.

This group, like the National Assembly's effort at reviewing the constitution as a short-cut to the SNC, will not succeed except it permanently resolves the issues of resource and environmental control and true federalism. It will fail as usual and so a waste a money and time, unless it resolves revenue allocation issues, illegal land-grabbing by government (revocation of land used degree), local autonomy and insecurity, and killing by government officials-complete lawlessness.

Unless the Belgore led committee will resolve the issues of state creation, respect for all nationality and equality of groups, that all nationalities (no matter how large or small) which can pay the cost have one state each or more that will be evenly distributed according to need and viability. Unless it will resolve the issues of education, healthcare, child, women and general human rights, and other pressing issues that all the forced nationalities shall agree to. Of course, government appointed and doctored committee will not treat all the aforementioned issues logically and satisfactorily. So the quest for SNC or ENC stands.

In a Sovereign National Conference therefore, the different nationalities, not few appointed individuals by government or few who represents the states by mostly rigged elections and are in the National Assembly, will speak for themselves. This conference will discuss and in honesty and by compromise resolve the grievances of the first military coup plotters of 1966, if any.

Also to come to the table is the issue of late Isaac Adaka Boro, who, angered by the oppression against Niger delta by the federal government took up arms in 1966, and declared the Niger delta Republic from Nigeria. Boro's legitimate rebellion was crushed by the federal troops within 12 days. The grievances of the Igbos leading to the declaration of Biafra Republic from Nigeria, and the ensuing war that lasted 3 years (Nigerian-Biafran Civil War, 1967-1970), killing more than 3 million people shall come to focus.

The nonviolent and peaceful, intellectual agitation for ERECTISM by the Ogonis, under Ken Saro-Wiwa and MOSOP, which culminated into the unjust hanging of Saro-Wiwa and 8 other Ogonis shall be discussed and resolved. The reemergence of the Adaka Boro's armed struggle, led by MEND and other militant groups (mostly of Ijaw stock) in Niger delta shall as well be discussed. The current grievances of Northern Nigeria's (Hausa) Boko Haram; the Yoruba and all other grievances shall also be discussed. There shall be lasting solution resulting from these discussions based on honesty and accountability.

There could as well be level-field pardon for all violence and destruction to enable the new polity move forward. This, of course, will be decided by the conference and Nigerians. If the conferees decide not to discuss these old grievances or issues (which I doubt), but move to fixing all or most of the issues raised above, so be it; so long as doing so will appease all sections...after all there is need for compromise.

It is sufficiently clear that all the government-sponsored and doctored conferences and summit have not and will not save Nigeria nor will the so-called war against terrorism save the state, even though America may be involved now as it seems. America already asserts its interests are threatened by Boko Haram's terrorist acts. The Nigerian conflicts are older and deeper than Boko Haram.

Nigeria-country today, is at multiple cross-roads hence the threatening, deadly and unsafe state of affairs. There is no freedom, justice, security nor peace. Education and other socioeconomic and cultural developments are in total disrepair or nonexistent. Everything is lopsided, and upside down!

The old crooked methods that continuously place the country in the state of bloodletting, irresponsibility, and mismanagement, zero accountability, hyper-greed and total disregard are palpable. Disrespect for individual's (and child, women), groups or nationalities, especially minorities' rights pervade the polity. There is a nationally institutionalized policy to oppress Nigerians, especially minorities.

As such the ghost of a jettisoned SNC which some have been killed for agitating peacefully continues to chase Nigeria. The powers that be have refused to look up not to mention seeing the signs pointing to this conference as the only cure or panacea to the country's disease that emanates from the mistake of colonization, and amalgamation of the Northern and Southern protectors in 1914.

These cabalic insensitivity, greed and brutality have become the Nigerian culture. There have been unabated corruption, state-sponsored terrorism, insecurity and palpable fear, which could be liken to Thomas Hobbes' "State of Nature." A situation he asserted in his acclaimed work: "Leviathan" of 1651, that, "life was solitary, poor, nasty, brutish and short," due to human animalistic nature: selfishness, everyone seek power; a life where individual interests and greed take over community or collective interests and dreams.

In such state of nature there is acute backwardness, irrationality, lawlessness, insecurity and lack of organization, so a government or monarch will best manage the people, by Hobbes' thinking. Sadly, the mistake of 1914 does not change the "state of nature," rather makes it worst in and against ordinary Nigerians, because the government or monarchical arrangement is also controlled by humans, who are in the Nigerian case more animalistic.

In conclusion therefore, it is no longer a secret or should it be wise for people to go to war because of the fact that Nigeria's formation was not based on consultation rather illegality and fraud. No spiritualist is needed to know that this coercion of free peoples is responsible for the country's disease.

Many Nigerians, including but not limited to Saro-Wiwa, Anthony Enahoro, Wole Soyinka, and groups have called for a SNC, which will save Nigeria. The true federation (of ethnic nationalities) with great power devolution Nigeria is meant to be was aborted before independence (1960) due to greed and hidden agenda of rulers who were mostly of the so-called majority ethnic groups. That trend has not changed, so a SNC is needed that will speak to such cabalic agenda.

It is on record that late Chief Obafemi Awolowo concluded that Nigeria was a mere geographical expression. He also asserted that, in a true federation all ethnic groups are equal, no matter how large or small. As many, including the Saduana of Sokoto Sir. Amadu Belo and Richard Akinjide, QC, SAN, a member of the Nigeria's first cabinet have declared. Nigeria, especially the 1914 amalgamation is a mistake; it is also poisonous as its attributes and citizens oppression currently shows.

Therefore, it is either this SNC or CEN is convened and all lingering issues causing people so much suffering are resolved or the different peoples go their different ways. A peaceful dissolution or disintegration will save lives hence preferred, to the experience of former Yugoslavia, or the bloody conflict that led to the independence of South Sudan.

Relevant international law shows that independence or self-determination in any fashion and by whatever means, including arms rebellion is not prohibited. Talks and consensus such as expected at the SNC are encouraged by the international law or community for peaceful resolution of conflicts.

If Nigeria will survive another 30 years, the people have no option but discuss and plan a Sovereign National Conference, which will chat a new country or many countries out of the present, for peace sake.

Experience has shown that forced peoples as synonymous with Nigerians can not stay forced forever, but shall do all it takes to be free. And although Libya, Egypt and the rest are not the same as Nigeria, and what may befall Nigeria in about 30 years may not be the same as the Libya's and others' experiences.

The current realities on the global stage should serve the Nigerian government and peoples a lesson, that they should see a Sovereign National Conference or Ethnic Nationalities' Conference as the lasting solution or cure.

It should be seen as a panacea to the country's disease. If not, the dynamics of history dictates a peaceful or bitter dissolution that can not be stopped. As usually the case when the SNC agitation intensifies. Pres. Jonathan (in the league of cabal) is reported in Nigerian Compass of Nov. 18, 2011, as was also reported in Punch of Oct. 20, 2010, as saying or implying, SNC is not an option.

While inaugurating the newly formed constitutional review committee under the leadership of Belgore, "Jonathan noted that in spite of the challenges confronting the nation, “our sense of togetherness is strong and our democracy is deepening” (Nigerian Compass, Nov. 11). Reality shows this statement is not true; rather implies oppression and bloodbath will continue...instead of a lasting cure, which is a SNC.