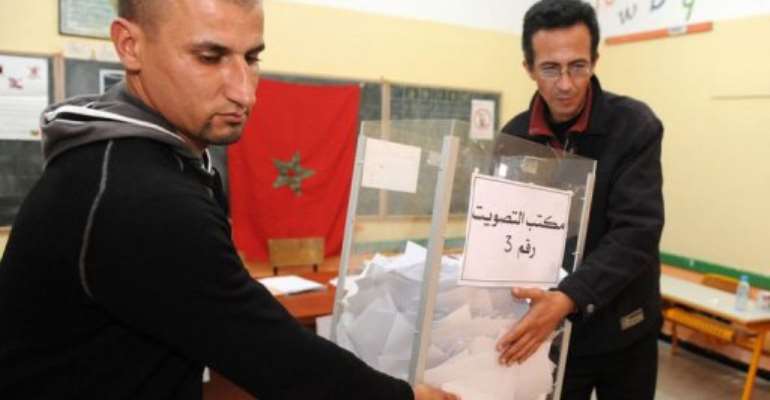 RABAT (AFP) - Moroccans voted Friday in the first legislative election since the king introduced constitutional reforms in response to the Arab Spring uprisings, with an Islamist party expected to make strong gains.

The main contenders in the election, the second in north Africa since the Arab Spring began, are the moderately Islamist Justice and Development party and a handful of liberal, secular parties.

The election comes less than five months after a July referendum overwhelmingly approved a new constitution proposed by King Mohammed VI as autocratic regimes toppled in nearby Tunisia, Egypt, and Libya.

Under the amended constitution some of the powers of the king, who hails from a monarchy that has ruled Morocco for 350 years, were transferred to parliament and the prime minister, who now must be appointed from the party which wins the most seats in the assembly.

But the 47-year-old monarch remains the head of state and the military and still appoints ambassadors and diplomats.

Analysts said a high voter turnout would give credibility to the reforms.

Throughout the day commercials broadcast on television urged Moroccans to "carry out their national duty" by voting while newscasts repeatedly explained how people could find out where their polling station is located.

Morocco's pro-reform February 20 protest movement had called on voters to boycott the elections. It says the constitutional reforms are insufficient.

Provisional interior ministry figures put the turnout at 45 percent, up from 37 percent in the last parliamentary election in 2007 but lower than the 51.6 percent turnout recorded in 2002.

"The election took place in a normal context, under a climate of mobilization and a sense of responsibility," Interior Minister Taib Cherkaoui told a news conference called to give the turnout figures.

Final election results will only be announced on Sunday afternoon, the minister added. The government had previously said the final results would be given on Saturday.

Opinion polls are not allowed in Morocco, but some observers said Justice and Development could emerge with the most votes after similar success by a moderate Islamist party in Tunisia's first democratic election last month.

Its main rivals are Prime Minister Abbas El Fassi's centre-right Independence party and the Coalition for Democracy, an eight-party pro-monarchy bloc that includes two of the five governing parties.

"The public powers did everything to ensure that this vote was a healthy and transparent democratic moment," he added.

The Independence party took the most votes in the 2007 election, winning 52 seats, followed closely by the Justice and Development Party with 47.

The Islamist party focused initially on social issues, such as opposition to summer music festivals and the sale of alcohol, but has shifted to issues with broader voter appeal like the fight against corruption and high unemployment.

"I am going to vote for Justice and Development Party. I want to see what they are capable of," said 20-year-old Fatima, who covered her hair with a headscarf as she waited to cast her ballot at a polling station in the Casablanca slum of Sidi Moumen.

Morocco's complex proportional representation system lends itself to fractured parliaments and no party is expected to obtain an absolute majority on its own so the winner will have to govern in a coalition.

In all, 31 parties are vying for the 395 seats in the lower house of parliament -- 70 more than during the last election.

Of the assembly's 395 members, 305 are elected from electoral lists put together by the the parties in 92 constituencies.

The remaining 90 seats are elected from a so-called national list, with 60 seats reserved for women and the remaining 30 seats set aside for candidates under the age of 40.