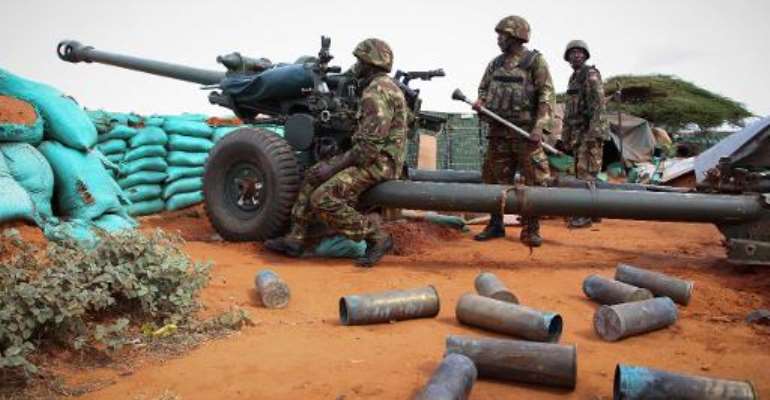 Kenyan soldiers serving with the African Union Mission in Somalia man an artillery position at the Kismayo Airport, on August 22, 2013. By Ramadaan Mohamed (AU UN IST/AFP)

Hardline Shebab insurgents control large parts of rural southern Somalia, having been driven from a string of towns by the African Union mission in Somalia (AMISOM), although guerrilla units stage regular deadly attacks in the capital Mogadishu.

The inclusion of Ethiopia into the force will free up other units to stage a long awaited offensive on Shebab bases in the far southern regions of Lower and Middle Shabelle, with Kenyan units advancing from the south, and Uganda and Burundi pressing from the north.

Ethiopia is to contribute a three battalion-strong contingent -- suggesting some 2,000 men -- although the mission has not given exact troop numbers.

Their troops are based mainly in southern border zones, including in the towns of Baidoa and Beledweyne.

Last year the UN Security Council authorised the force boost its numbers by around a third to 22,000, as part of efforts to wrest final towns from the Shebab, including the port of Barawe.

"The Ethiopian deployment will permit Burundian and Ugandan forces to move into parts of Lower and Middle Shabelle," the mission said in a statement, suggesting preparations for a long awaited assault.

AMISOM, first deployed in 2007, is a unique military operation as it is run by the African Union, but with a UN mandate. Most of its financing comes from the European Union and other international donors.

Ethiopian troops crossed into Somalia in November 2011 to battle Shebab militants, reprising a role they played in their 2006 US-backed invasion of Somalia.

The 2006 invasion sparked a bloody uprising, and Ethiopian troops pulled out three years later after failing to restore order in their lawless neighbour.