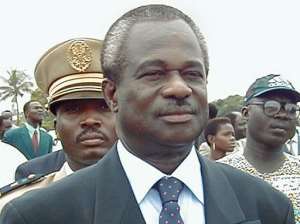 "The accusation is totally false," Eugene Koffi Adoboli, who has lived in Switzerland since 2002, told Kanal FM radio. "At no time have I dipped into the accounts of the Togolese government.

"This judgment borders on the ridiculous and does not honour our country," the 76-year-old said.

Adoboli, prime minister between 1998 and 2000, was accused of embezzling 800 million CFA francs (1.2 million euros) of the budget allocated for the construction of villas in the capital Lome in 1999.

The buildings were to be used by heads of state for a summit of the then Organisation for African Unity, which has since become the African Union.

Adoboli served as prime minister under Gnassingbe Eyadema, who ruled the small West African country with an iron fist for 38 years until his death in 2005. His son, Faure Gnassingbe, is now president.

Two other people were also sentenced in absentia over the allegations, including former secretary of state Saibou Samarou and ex-planning minister Hope Agboli, currently serving in Togo's embassy in France.

Both were sentenced to eight years in prison, while all three accused were ordered to pay 500 million CFA francs (762,000 euros) in damages and interest.