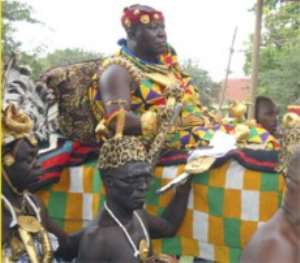 In the history of our country as a people, Chieftaincy has been the most revered and surviving ancient institution that has been able to stand the test of time, before colonialism, during colonialism and even after independence. This piece is not to exalt any chief or king above the other or even other chiefs not mentioned here, neither is it to make some chiefs seemingly more important than others but to explore the level of cordiality that had existed amongst our chiefs after independence and even before independence. This article considers the Okyenhene and Asantehene largely because these are the two chiefs (or kings if you like) that the writer has some knowledge on as far as the relationship among chiefs are concerned probably because they seemed quite more influential or better still relationship between these two kings embodies most of the Akan chiefs in general.

Both archival and oral sources place the Asantehene and Okyenhene as the most powerful chiefs in the Akan ethnic setup even before the declaration of independence. Independence however reduced the powers of chiefs in Ghana with its attendant passage of laws to that effect by Dr.Kwame Nkrumah apparently to punish chiefs who were against him in the political circles of the country at that time. As to whether chiefs are powerless now that is for readers to make their own judgments. In historical terms enmity between Asantehene and Okyenhene started when the former decided to incorporate the latter and his Okyeman kingdom into the Ashanti kingdom which led to the death of the founder of the Ashanti kingdom itself, Osei Tutu I. Osei Tutu I died in a bitter war with the Akyems near the Pra river, his death brought the enmity between Akyem and Asante to its crescendo and also gave birth to the highest oath of Ashanti. Records say there had been over 99 wars between Asante and Akyem after Osei Tutu's death.

However in the years to come, the Okyenhene Nana Sir Ofori Atta's support to an Ashanti campaign to the British for the return of the exiled Asantehene Nana Sir Osei Agyemang Prempeh was not only to culminate into Prempeh's return but to also establish some sort of peace of convenience between the two kings. Later events manifested this peace and cordial relationship between the two as the Asantehene is on record to have sent a delegation of about 500 mourners to mourn with Okyeman during the funeral of Nana Sir Ofori Atta who died later. From here, historical hard core rival enemies are smoking the peace pipe now. Interestingly, with the formation of UGCC and its subsequent transformation to NLM these two chiefs, the new Okyenhene and the Asantehene were to support NLM over CPP which incurred the wrath of Kwame Nkrumah on them culminating into their public humiliation by Krobo Edusei and later official withdrawal of State recognition from the Okyenhene. Apparently, the Asantehene and Okyenhene were the most powerful chiefs that had resisted the political power of Kwame Nkrumah and the CPP during the time of independence.

Coming up to recent times, the late Otumfuo Opoku Ware and Osagyefuo Kuntunkunuku had good relations as we witnessed Kuntunkunuku visit Opoku Ware at Manhyia,Kumasi and Opoku Ware also going over to Akyem to reciprocate that courtesy, such was their friendship to the extent that when Kuntunkunuku died barely three weeks after Opoku Ware's death some people literary said the Asantehene had invited his friend Okyenhene over to the land of the dead.Infact Kuntunkunuku was supposed to have led a delegation to manhyia to mourn the Asantehene but that was not to be as an old adage in Akan language goes this way: 'damfo pa wu a damfo pa nko nayie' literally means, when your best friend dies you don't attend his funeral.

Coming up further to our recent editions of Okyenhene and Asantehene, there is some cordiality in the mist of some aggression not on their part per se but the people they represent. I was in Kumasi some few years back and in a conversation with some people, the issue of developmental chiefs came up. In the ensuing discussion, both the Asantehene and Okyenhene were named including other chiefs not mentioned here as chiefs helping to develop their areas and the country at large. One of the guys in the discussion added “the Okyenhene is he not the one competing with the Asantehene”. For this guy and many others who think like him, the Okyenhene is competing with the Asantehene over prominence, more or less who is who amongst the two. And to say the truth these guys somehow have a valid point, why do I say this at the funeral of Oyeeman Wereko Ampem in 2006 there was near mayhem when all rose to the arrival of the Osagyefuo Amoatia Ofori Panin who was also the chief mourner as a sign of respect to the Okyenhene except for the representative of Otumfuo Osei Tutu II in the person of the Tepahene. This was understood to be disrespect to the Okyenhene, a similar spectacle welcomed patrons of the home coming summit of Birim North citizens domiciled abroad held at Abirem in 2002 when again the representative of the Asantehene refused to greet the Okyenhene.

In the mist of all these, in 2009 when both of them marked their 10th anniversary, there were representations from each side to each others durbar. So can the Asantehene and Okyenhene ever meet at one function? Should it be the case where one of them must decline to attend personally and send a representative depending on the role he is supposed to play or both decline to attend and send representatives as we saw In the 2010 Millennium Excellence Awards where the Akyempemhene played the role of Asantehene and the Okyenhene also sent Nana Tafohene to receive an award on his behalf. So is it the case that they are both very proud of the offices they occupy and see greeting the other one first as kowtowing to his authority or one of them should do the greeting depending on the location and the role one is to play at a particular function or better still it is a mere tradition which expresses no hard feelings between the two of them. Probably that is the beauty of our culture and traditions as a people.