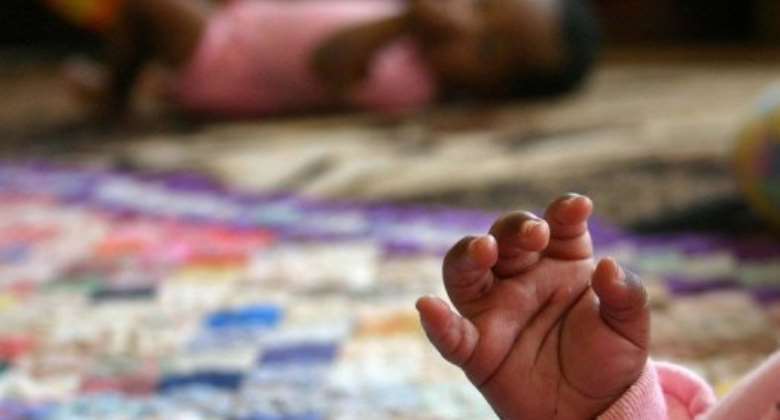 Cases of child abuse and people trafficking are common in West Africa. By Fati Moalusi (AFP/File)

ENUGU, Nigeria (AFP) - The proprietor of Nigeria's Moonlight Maternity Clinic was not interested in discussing allegations that he sells newborn babies, with boys fetching higher prices than the girls.

"I have nothing to say to you," Ben Akpudache, a stout 74-yeard-old, told AFP at the small, dimly lit clinic with concrete floors tucked between commercial shops in the southeastern city of Enugu.

"I can't just have people coming in and asking questions."

"Doctor" Akpudache, whose medical credentials are under question, had his clinic raided in July after a three-month sting operation in which the security forces discovered a so-called baby factory.

"We had our people posing as if they wanted to buy a child," Nigeria's Civil Defence Corps (NCDC) spokesman Denny Iwuckukwu told AFP.

Police had separately stormed his home in May, where they discovered that babies were also for sale.

The "factories" are usually small facilities parading as private medical clinics that house pregnant women and offer their children for sale. In some cases, young women have allegedly been held against their will and raped, with their newborns sold on the black market.

But security services say the majority of cases, including that of the Moonlight clinic, have seen unmarried women with unplanned pregnancies arrive voluntarily or through persuasion.

Their newborns are then sold for several thousand dollars, with boys fetching higher prices. The mother receives roughly $200 (150 euros).

Typical was Ebere Onwuchekwa, 29, who became emotional when asked about the sale of her son Prosper.

Speaking at the office of a child rights NGO, she said the father demanded she get an abortion, illegal in Nigeria, and she refused. Her mother ultimately brought in a "midwife", who delivered the baby then sold him for $1500.

"She took him away... He was a day old," said Onwuchekwa.

After learning what happened, her uncles tracked Prosper down and got him back. The 18-month-old sat quietly on his mother's lap as she spoke.

When asked about the woman who sold her son, a resentful Onwuchekwa said "she doesn't want me to say anything about what happened".

As for Akpudache, he is out on bail and his facility, which he insisted in a brief, tense encounter was a "registered maternity clinic", remains opens.

Authorities said it was not been shut down because they were waiting for the courts to take action, though the NCDC spokesman insisted Akpudache would face justice.

"Human beings should not be sold like animals," said Iwuckukwu.

In a video provided to AFP by the Enugu police, one of the women said she wanted to continue studying, not struggle as a single mother. Akpudache's offer to host her through the pregnancy then sell the newborn seemed a solution.

In the same video, Akpudache said he was just trying to "help people in need".

Despite a 2003 law against human trafficking, including selling children, it is Nigeria's third most common crime behind fraud and drug trafficking, the United Nations has said. The European Union has cited Nigeria as the African country where the scourge is most common.

The maximum sentence is life in prison but sentencing remains at the judges' discretion and offenders can get away with just a fine.

Baby trafficking, in particular, has intensified in the southeast, which is populated mainly by the Igbo ethnic group. The NCDC has several ongoing undercover operations targeting suspected baby trafficking rings in Enugu, underscoring the severity of the problem in this region.

The reasons given for why this "baby" market has developed here vary widely.

Some fear newborns are being sold to witchdoctors for rituals in a country where occult practices still occur. Some say fraudsters in the region had simply found another reliable way to earn cash.

But the security forces and activists said the majority of buyers are likely married couples struggling to conceive.

Oby Nwankwo, who spent years as a magistrates court judge in the southeast, said Igbo customs that place huge importance on male children may also play a role.

Widows and daughters have faced massive obstacles when trying to inherit family resources after the death of a patriarch, explained Nwankwo, also a member of a UN committee on discrimination against women (CEDAW).

In some cases, "if a man does not have a child, that's it. His brother or distant relative will inherit", said the ex-judge.

Nigerian courts have ruled against Igbo inheritance customs that discriminate against females, but the pressure on a couple to have a male heir remains intense.

Official adoption, managed by state governments in Nigeria, is excessively bureaucratic and involves a public record, a problem in a society where stigmas about adoption persist.

Iruka Nwokedi of the Women in Peace-Building Network in Enugu also blamed the intense pressure placed on having a son in the region.

"Most people want to go through the back door... they look for illegal means," said Nwokedi.