Afrikan History Month - A Tribute to the Afrikan woman 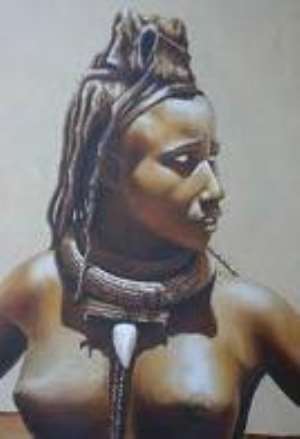 These are profound words and are so true if the Afrikan race is to rise again and take its rightful place in the world.

In days of yore the Afrikan woman was revered, worshipped as a Goddess and put on a pedestal.

It is a huge shame that today the Afrikan man in general has no regard for his woman and that the Afrikan woman is regarded as a sex object as featured on the many music video's that are played worldwide or as a domestic servant.

As a people we need to empower the Afrikan woman because she is the mother of civilization and without her there is no future for the Afrikan race.

This feature is to salute Afrikan women who have helped in the struggle of the emancipation of the Afrikan race and to encourage the Afrikan woman of today to love your Afrikan self and stop copying the White woman for you are more worthy than the white woman you are caricaturing.

THE LEGACY OF AFRIKAN WOMEN
These stories are taken from the book In praise of Black Women by Simone Shwarts- Bart and seek to give us all concrete examples of the power, scope and nature of Afrikan women in the past. Afrikan women should NEVER accept being told that they have done nothing. They have created religions, resisted invasions, raised kings and more.

Lucy
Humanity was born in Afrika, Afrika south of the Sahara to be precise. In 1959 two paleontologists dug up the skull of a human like being dated to be 1.75 million years old. The place of the discovery was Olduvai Gorge in Tanzania. In 1974, at the same location, they discovered Lucy, a 7 ½ million year old fossil of a small woman. This young Afrikan woman, Lucy, is the womb from which all humanity originates.

Queen Tiye
Little known today, Queen Tiye is among the women who have most marked history. 3,500 years ago she was the wife of the Egyptian Pharaoh Amenhotep III. Queen Tiye's beauty was legendary, but her personality was even more powerful. For her pleasure the Pharaoh built a new palace for her in Thebes (now called Malkata). He also dug her a lake in the middle of the desert, just to please her. The revolution in Egyptian art dates back to her rule. Her influence on the Pharaoh was so great that she seemed to the supreme authority in the empire.

When the Pharaoh died, Tiye's son Akhenaton came into power and it was during his rule that Queen Tiye took action that has most decisively marked history. Up until then Egyptians, like many others, were polytheists, they saw the world around them as governed by several gods. But suddenly, under Queen Tiye's influence, the Pharaoh proclaimed for the first time in human history, a single God-Aton.

This reform may have inspired Moses to establish the monotheism that has since spread all over the globe. So today when people pray to God in a church, mosque or synagogue, they may be, in some way, under the invisible influence of Queen Tiye.

The Candaces
The kingdom of Kush so renowned and honoured in ancient times was headed by Queens know as the Candaces. The Black Kingdom of Kush was born about 3,000 years ago and lasted until 350 AD. In the year 750 BC, the kingdom expanded north along the Nile and conquered Egypt founding the 25th dynasty, the illustrious dynasty of the Black pharaohs.

However in 666BC the Assyrians invaded Egypt and defeated them. The final battle took place in Thebes which the Assyrians burnt to the ground.

Tutankhamen is the name of last black pharaoh to rule Egypt, he fled to Napata (Maraw) after the fall of Thebes. Napata was then the capital of the Kingdom of Kush. Of the Queens of Kush, the Candaces, two names stand out. The first is Amanireans, the Queen of Kush when the Romans followed the Nile south after the defeat of the last Pharaoh Cleopatra. She is described as a 'very masculine woman who had lost an eye in battle'. Masculine probably meant courageous.

Remembering her Pharaoh ancestors she went down the Nile to meet the Romans and defeated them at Aswan where her soldiers broke all of statues of Emperor Augustus. Although the Romans formulated a counter offensive in the form of a strong army that stormed the kingdom of Kush up to Napata, it failed. This army was thoroughly humiliated by Amanireans and her army.

The Roman army was withdrawn back to Egypt. Finally giving up the conquest of Kush, the Romans suggested that Candace ask for peace which the Emperor Augustus granted.

The second Candace is mentioned in the Bible in Acts 8. The story explains how the apostle Philip heard a voice telling him to go to Jerusalem from Gaza. On his way he met eunuch, who was a Minister to Candace 'Queen of Ethiopia' (Kush was called Ethiopia by this time). The story goes on to detail how Philip told the eunuch of 'the good news of Jesus Christ'.

The eunuch was baptized and went o back to Kush filled with a desire to share the news he had been told. It appears that Candace was the first in Afrika to embrace the faith. As a result Christianity went down the Nile reaching the area we now call Ethiopia. The biblical Candace and Amanrenias, the brave lady with the missing eye, give us a glimpse into our buried Afrikan past.

Makeda- Queen of Sheba
The story of the Makeda is recorded in the Bible in the second book of Chronicles and the first book of Kings. Makeda had learnt of the wisdom of Solomon and went to Jerusalem to test it with riddles. The Kebra Negast, a 14th century book of legends of Ethiopia says that the visit of Makeda lasted more than six months. At the first sight of Makeda, Solomon was struck by her miraculous beauty and he said in his heart 'May God bless me with offspring through her'.

On the day of Makeda's departure, Solomon had gifts loaded on 6,000 chariots for her alongside a vessel to travel in the air. He begged that if a child should be born of their union that she send him home to Jerusalem and give him a ring so that the child be recognized. So Makeda went back to her country where she gave birth to child and named him Ibn el Hakim: Son of Wisdom. When the child grew up, Makeda gave him the ring and sent him to visit his father.

The child was 22 years old. In Jerusalem, crowds gathered in the streets surprised to see someone who looked so much like Solomon. Some people thought he looked even more like his grandfather David. During his stay in Jerusalem, the young man was adorned and consecrated a king in the Temple of Jerusalem.

This is how he became Menelik I, the first king of the famous dynasty of the Lions of Judah, the last of whom was Negus Haile Selassie, the last Emperor of Ethiopia.

Ana de Sousa Nzinga
In 1860 the Scottish missionary David Livingstone reached the old Portuguese stronghold of Luanda. Bare stairs, cells and shackles told of the horrifying recent history here. As he reached a courtyard he saw the imprint of a woman's foot engraved in stone. When he asked whose it was an Angolan man declared it was the imprint of the great Ngola Nzinga who had set foot in this courtyard 300 years ago.

Ana de Sousa Nzinga was born in 1581 in Basa the capital of the kingdom of Ndongo, a land ruled by leaders called ngolas. During this time the Portuguese were advancing towards Ndongo with the aim of converting them as they had the peoples of Kongo. However, the greatest treasure in the minds of the Portuguese were the very people of Angola- the black ivory- slaves.

Ngola Karensi, Ana de Sousa's father, had thought about the European effect on neighbouring Kongo and decided to bar missionaries from his country. War was waged against him for this decision. This war will last more than 40 years, until his very last breath. On the King's death, power falls into the hands of his oldest son Ngola Mani a Ngola who raises an army of 30,000 men who he intends to put to fight against the Portuguese. Ana de Sousa Nzinga, the amazon and warrior considered the greatest political mind of her time plans to join them on the battlefield.

She realizes that their traditional lances are no match for the Portuguese guns and points this out to the king in a council meeting saying, 'My dear brother, your warriors are many, but their chests are bare; if you go this course, your defeat will be that of the whole nation'. Furious, the king has the throat of Nzinga's only son cut and has her sterilized some say using red hot pokers while others claim they used scalding water.

A few months later after having been defeated again, the king begs Nzinga to negotiate a peace agreement with the Portuguese governor of Luanda. Since she speaks Portuguese and has studied their customs, ways of thinking and military strategies, Nzinga agrees to go though she cannot forget her dead son and ruined womb.

But the lamentations of her people give her the conviction she needs and so she sets off for Luanda. She enters the white fortress accompanied only with a few of her fellow women. At that moment, trying to test her, the governor fires a 21 gun salute. But the princess already knows the sound of the white man's music and she enters the fortress without blinking an eyelid.

She crosses the courtyard where her step leaves an imprint in the stone as she makes her entrance into the main reception room. The room is full of armed men. All the way from the back of the room the governor signals her to step forward, but still wishing to embarrass her, he has not prepared a seat for her.

She gestures to one of the women who kneels and Ana de Sousa Nzinga sits upon her human throne. The governor rudely asks her what the conditions of her surrender will be to which she replies, 'I represent a sovereign people and I am ready to continue this conversation only on that basis.'

A few months later in 1623 a peace treaty is signed between the kingdoms of Angola and Portugal.

But Nzinga knows the tricks of the Europeans and is still determined to fight in order to protect her people from the slavers. On her return home she jails her brother and proclaims herself ngala.

The passage of time proves Nzinga was right about the Europeans. The peace treaty lasts the space of only a dream and soon the Portuguese are moving deeper into her kingdom. Though she suffers setback after setback she fights until the very end. For 30 years she will fight to win her homeland. She will return blood for blood and slaughter for slaughter, all to save her people from slavery.

She dies at the age of 84 without having been able to rebuild her homeland but she is still remembered as the woman who lost many battles but never lost the war. Ana de Sousa Nzinga lived a queen and died a queen.

The Afrikan woman of today should take these stories to heart an act like an Afrikan woman and NOT a European woman - in short be BLACK AND PROUD.

The channel we used was the same channel Joy FM used to get ...
37 minutes ago