PRESIDENT STORMS TEMA HARBOUR OVER ANAS VIDEO … We Promise Not To Take Bribes Again, We Have Repented 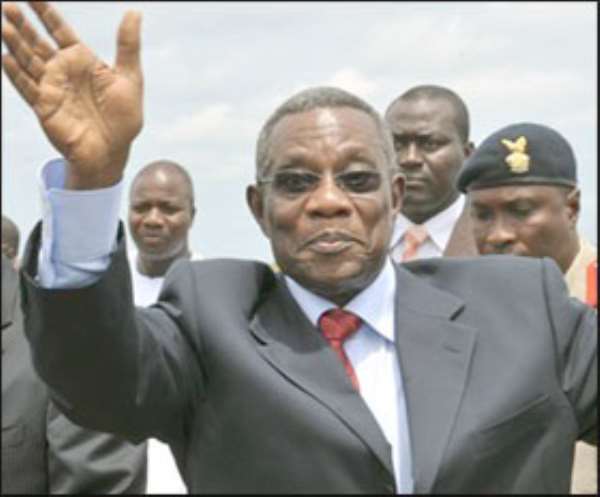 President Atta Mills has reacted to The New Crusading GUIDE's expose on bribery and corruption at the Tema Harbour, with an unannounced visit to the Harbour of Friday. The President deplored the entrenched corruption at the port and said it risks hurting foreign investment prospects for Ghana.

Addressing a section of security officials on duty at the Harbour, President Mills sharply condemned the several acts of bribery and corruption of CEPS officers and other security officials who were captured by our cameras in the “ENEMIES OF THE NATION” investigative work.

The President in his statement said he had always suspected corruption at the Harbour and other places including the country's border and was “waiting for the Anas Video”.

He expressed worry about the level of greed exhibited by the officers at the mercy of the National development agenda. “Look at the number of people who go to school under trees. Look at the number of people who cannot even have access to medical care. We need the revenue to be able to do that. And what is happening? The money you collect does not belong to you. It belongs to the nation and nobody has the right to appropriate what belongs to the nation”.

In an apparent state of disapproval, the President continued: “This is the gateway. When people want to invest in Ghana they come to the gateway and they are met with corruption. Don't be surprised that today I am in an angry mood. And I have every reason to be angry. Look at the number of people who can hardly make ends meet. Look at the number of people who cannot go to school because we don't have the resources”.

The President called for an institution of a law that will require officials at CEPS to declare their assets. He also gave his support to the Acting head of the Customs Division of the Ghana Revenue Authority, General Carl Modey to take any drastic actions necessary to rid the Ports of corruption.

“I will go far to suggest that anybody who joins Customs must have an assets declaration form. They must declare their assets and from time to time, new assets declaration forms should be filled so that we know what is happening. I know that they turn a blind eye to it but I am not going to have that under my watch” he stated.

“I have told General Modey that he has every right to do what he thinks is right. Who is watching the watchman? I wish that the revelation from Anas could have come to me from the security agencies who work here. There are people who come here throwing their weight around. I have told General Modey that anyone who comes here in the president's name, the first thing you should do is to arrest them. I am not going to be party to anything which will destroy what we are building in this country” he said.

He further charged General Modey to arrest anyone who engages in corrupt activities using the name of the President. "There are people who come here throwing their weight around; dropping names of so-called higher ups. I have General Mordey and I am telling you if anybody comes here with the president's name the first thing you should do is to arrest that person," President Mills said.

President Mills further expressed regret about the state of affairs in the judiciary regarding the earlier video recording by our ace investigative reporter, Anas Aremeyaw Anas, of cocoa smuggling aided by state officials.

He made reference to the 14 suspects, mostly CEPS officers, caught and arrested for aiding some smugglers to export Ghana's cocoa to neighboring Cote d'Ivoire, but were discharged by the court, after a non-corporative attitude of the prosecution team handling the case.

“I also want to use this occasion with the greatest of respect to appeal to our judiciary. My plea is that please help each one of us to account for our stewardship. What happened with the Elubo video causes me so much distress? What happened? Is it a good example? We will not tolerate these lapses," he warned.

Meanwhile, The New Crusading GUIDE is reliably informed that Major-General Carl Modey has already sacked some of the bribe takers captured on the recent “ENEMIES OF THE NATION” video.

Security Officers Talk About Repentance
As a result of this development, some CEPS officers and other security officials who spoke to The New Crusading GUIDE after President Mills' visit have expressed remorse for arousing the anger of the President by their actions.

“Starting from today, we are not going to indulge in any act of corruption again. This video has brought so much disgrace to the service and we have repented of all we have done”, said one of the officers.

Another CEPS officer commended The New Crusading GUIDE for the story. “Anas and your paper have really helped mother Ghana. I believe Ghana is going to be better with more of these revelations”.

Checks by the paper at the Harbour after the President's visit showed a very unusual calm at the Harbour. Officers at their duty posts appeared shaken by the developments and many are refusing to look into the eyes of clearing agents for fear of being filmed by Anas.