President Mills suspects drug traffickers in his own government? 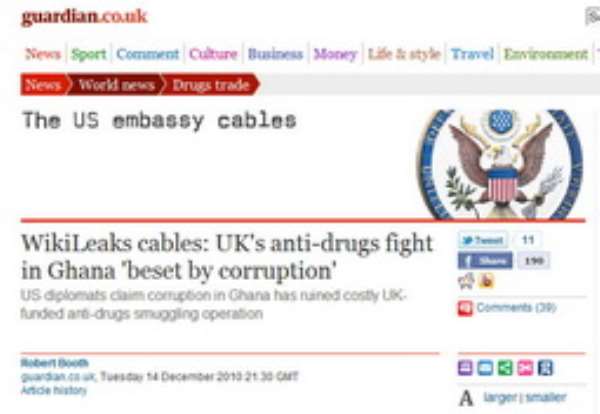 
The troubled yet troublesome Wikileaks cables rummaging nations across the globe has its snowballing damnations hitting Ghana as the Guardian goes public with a detailed account of how security operatives engaged in the fight against drug trafficking are tipping off “couriers” with information of when it is “safe” to board flights to avoid being arrested.

President John Evans Atta Mills is also quoted as expressing fears persons in his own entourage could be engaged in smuggling drugs through the presidential lounge of the Kotoka airport and therefore asked a senior UK customs official in November 2009 for help to screen them but "in the privacy of his suite to avoid any surprises if they are caught carrying drugs".

According to the leaked cables, not only are officers of the Narcotic Control Board (NACOB) actively helping traffickers and even calling the criminals on their mobile phones to tell them when to travel to avoid detection, they are also noted to sabotage sensitive drug scanners provided to the government of Ghanaian while channeling passengers, including pastors and bank managers and their wives, into the security-exempt VVIP lounge despite suspicions they were trafficking drugs.

The leaked cables touch both the Kufuor administration and the present Mills reign, as evident in the full report culled and republished below.

A British operation to stem the flow of cocaine through Ghana has been beset by corruption, with local drug police sabotaging expensive scanning equipment and tipping off smugglers to avoid detection, leaked US embassy cables reveal.

Ghana's president, John Atta Mills, even worried that his own entourage may be smuggling drugs through his presidential lounge at Accra's Kotoka airport, and asked a senior UK customs official in November 2009 for help to screen them "in the privacy of his suite to avoid any surprises if they are caught carrying drugs", according to the US embassy in Accra.

The request reveals a deep crisis in the bilateral operation against wholesale drug trafficking into the UK through an airport which has become one of the main transit hubs for South American drug cartels after the authorities successfully blocked routes from the Caribbean.

Operation Westbridge has so far cost the taxpayer more than £1m and more than £100m worth of drugs has been seized amid growing UK concern that drug trafficking is becoming institutionalised in west Africa. The UN has estimated that up to 60 tonnes of cocaine, worth £1.3bn, are being smuggled through west Africa, mostly into Europe, each year.

According to the cables, Ghanaian narcotics control board (Nacob) officers working with British officials:

• Actively helped traffickers, even calling the criminals on their mobile phones to tell them when to travel to avoid detection.

• Channelled passengers including pastors and bank managers and their wives, into the security-exempt VVIP lounge despite suspicions they were trafficking drugs.

Smuggling has become so blatant that on one flight last year, two traffickers vomited drugs they had swallowed and subsequently died, while parcels of cocaine were found taped under the seats of a KLM plane even before boarding.

Roland O'Hagan, the British head of Operation Westbridge, reportedly told the US embassy: "President Mills had expressed interest in acquiring itemisers [portable screening devices] for the presidential suite at the airport in order to screen his entourage for drugs before boarding any departing flight."

Mills had publicly pledged to crack down on wholesale drug trafficking into the UK via the airport and won the presidency on an anti-drugs platform. But, in June 2009, he told the US ambassador to Ghana, Donald Teitelbaum, "elements of his government are already compromised and that officials at the airport tipped off drug traffickers about operations there".

Embassy contacts in the police service and the president's office "have said they know the identities of the major barons," but "the government of Ghana does not have the political will to go after [them]", a December 2007 cable said.

A UK official overseeing Westbridge had observed Nacob agents at the airport directing passengers away from flights receiving extra scrutiny, a cable from the US embassy in Accra revealed in August 2008. "On one occasion, [the official] returned unexpectedly to the airport at 4am to screen a flight. An arrested trafficker told the UK official that the trafficker had been told that Westbridge was not operating that night. A test by Westbridge officials of the mobile phone sim card of a trafficker found the phone numbers of senior Nacob officials."

He said two itemisers were incapacitated by sabotage, remarking that "the knowledge required to remove the filters exceeded the basic knowledge of the operators".

The cable concluded: "The government of Ghana does not provide the resources necessary to address the problem and, at times, does not appear to have the political will to go after the major drug barons."

Operation Westbridge began in November 2006, overseen by the Home Office and Foreign Office, and the government has trumpeted its success. Last year, the Home Office minister responsible for tackling drug trafficking, Alan Campbell, told a parliamentary inquiry that the scheme was a "very good example" of how to tackle the cocaine trade, while in a written statement, the Home Office said "these operations meet our drugs strategy commitment to intercept drugs and drugs couriers before they reach the UK".

In the confidential cables, a different picture emerges. Kim Howells, Labour foreign office minister, delivered a "stern message" to the Ghanaian government in October 2007 about its lack of co-operation and responded "testily" to a request from Ghana's interior minister for more scanning equipment, saying "if a 'criminal' is operating equipment, it is worthless," according to the US embassy in Accra.

Three months later, the embassy reported that "seizures in Accra drop to almost zero when the Westbridge team …is back in London".

In November 2009, O'Hagan told the US embassy that Nacob believes the airport's VVIP lounge has been a conduit for drugs leaving the country. Bank managers, pastors, and their wives were among those given official passports and access to the lounge which circumvents security checks, the embassy reported.

"Nacob placed two officers in the lounge to screen departing passengers, and the number of passengers using the VVIP lounge has decreased," the embassy reported O'Hagan saying late last year.